The following story is entirely true. More importantly, I swear on my entire professional reputation and all I hold dear to me that the story below was in no way staged, planned in advance, or in any way faked. This is real. And most importantly: This is AMAZING.

When my alarm clock went off at 3:30 this morning, I knew I was in for a long day. I was catching a 7am flight out of Newark to Tampa, Florida, for a lunch meeting in Clearwater, then heading back to Newark on a 5pm flight, getting me in around 8:10pm, and with any luck, to my apartment by 9 or so. We all have days like that, they happen from time to time.

Made my flight, everything was on time, got to my lunch meeting. Because of the training/workout schedule I’m on, my first meal of the day was that lunch. Was fine, I had a healthy piece of grouper, and a very successful lunch meeting that lasted just about three hours.

By the time I got back to the airport, it was close to 4pm. Flight boarded at 4:30pm, and I knew that by the time I got home, I wouldn’t have time to stop for dinner anywhere, and certainly didn’t want to grab fast food at either airport. When I got on the plane, my stomach was a rumbling a bit, and I had visions of a steak in my head.

As I’ve tweeted and mentioned countless times before, I’m a bit of a steak lover. I go out of my way to try steakhouses all around the world when I can, and it’s one of the reasons, no doubt, that my trainer at my gym is kept in business. But it’s all good – give and take. Over the past few years, I’ve developed an affinity for Morton’s Steakhouses, and if I’m doing business in a city which has one, I’ll try to schedule a dinner there if I can. I’m a frequent diner, and Morton’s knows it. They have a spectacular Customer Relations Management system in place, as well as a spectacular social media team, and they know when I call from my mobile number who I am, and that I eat at their restaurants regularly. Never underestimate the value of a good CRM system.

Back to my flight. As we were about to take off, I jokingly tweeted the following:

Let’s understand: I was joking. I had absolutely no expectations of anything from that Tweet. It’s like how we Tweet “Dear Winter, please stop, love Peter,” or something similar.

I shut off my phone and we took off.

Two and a half hours later, we landed at EWR. The fact that a flight got into EWR on time during summer thunderstorm season is a miracle in itself, but that’s not important right now.

Walking off the plane, I headed towards the area where the drivers wait, as my assistant Meagan had reserved me a car home.

Looking for my driver, I saw my name, waved to him, and started walking to the door of EWR, like I’d done hundreds of times before.

“There’s a surprise for you here.”

I turned to see that the driver was standing next to someone else, who I just assumed was another driver he was talking to. Then I noticed the “someone else” was in a tuxedo.

And he was carrying a Morton’s bag.

Now understand… I’m a born-and-raised New York City kid. It takes a lot to surprise me. A LOT. I see celebrities on the Subway. I see movies being shot outside my apartment, and fake gunfire from any given CSI show, five days a week. I’m immune to surprises.

Alex, from Morton’s Hackensack walks up to me, introduces himself, and hands me a bag. He proceeds to tell me that he’d heard I was hungry, and inside is a 24 oz. Porterhouse steak, an order of  Colossal Shrimp, a side of potatoes, one of Morton’s famous round things of bread, two napkins, and silverware.

He hands me the bag. 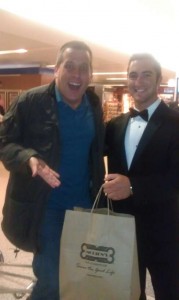 1) I was joking in my Tweet. I never, ever expected anything to come of it other than a few giggles.

2) Morton’s Hackensack is 23.5 miles away from EWR, according to Google Maps. That meant that in just under three hours, someone at Morton’s Corporate had to see my tweet, get authorization to do this stunt, get in touch with Morton’s Hackensack, and place the order. Then Morton’s Hackensack had to cook the order, get it boxed up, and get a server to get in his car, and drive to Newark Airport (never an easy task, no matter where you’re coming from) then, (and this is the part the continues to blow me away,) while all this was happening, track down my flight, where I was landing, and be there when I walked out of security!

Are you taking this all in? Because it happened to me, and I still can’t even fathom it.

Think about all the things that could have gone wrong: My flight could have been delayed or diverted. I could have exited out a different location. (Had I taken the AirTrain and not had a driver, I never would have even exited that way!) I could have just missed him all together, I could have landed early, etc., etc…

I have no doubt that countless companies think like that. They think along the lines of “Oh, too many logistics. That’ll never work,” and they leave it at that.

But what if it does work? What if it happens, and it works perfectly, and it shocks the living hell out of the person they do it to? Like it did tonight?

And what if that person’s first thought is to make it public? Like I did tonight?

As I say in my book over and over again, customer service is no longer about telling people how great you are. It’s about producing amazing moments in time, and letting those moments become the focal point of how amazing you are, told not by you, but by the customer who you thrilled. They tell their friends, and the trust level goes up at a factor of a thousand. Think about it: Who do you trust more? An advertisement, or a friend telling you how awesome something is?

Of course, I immediately tweeted out what happened: 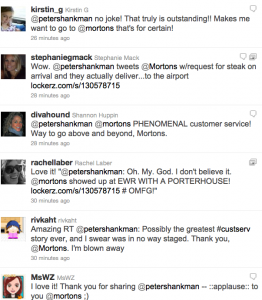 When I got home, I actually looked inside the bag at what Morton’s gave me, and again, was blown away: 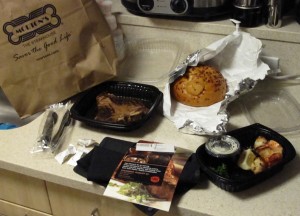 And as to be expected, the food was amazing.

Of course, there immediately came a few tweets from the other side of the camp, specifically calling out that I have over 100k Twitter followers, and if I didn’t, this never would have happened:

But you know what? I don’t think that’s the case. I don’t think it’s about my follower numbers. I think it’s about Morton’s knowing I’m a good customer, who frequents their establishments regularly. If you look at their Twitter stream, Morton’s is known for always being on the ball, thanking those who mention they’re eating there. Just a recent few tweets from Morton’s proves this: 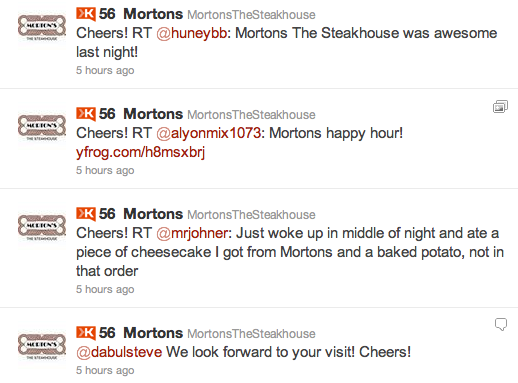 So I don’t think the number of Twitter followers I have played a big (if any) part in this story.

So… What can we learn?

Stay on top of what people are saying about you. Respond accordingly. Perhaps most importantly, have a chain of command in place that actually lets you do these things in real time. Had Morton’s had to get permission to make this happen, at 5:10pm on a Wednesday night, there’s no way it ever would have.

Complete and utter respect and admiration to Morton’s The Steakhouse. This was the amazingly gooey icing on an already great day. Thanks, Morton’s. In this day and age of online businesses, customer service and loyalty is increasingly important, read this guide on customer loyalty if you want to learn more.

PS: Possibly the greatest part of the story? NASA the Wonder Cat, (brother of Karma, who passed away a few weeks ago,) got a very unexpected dinner – not of cat food, but of several small bites of a Porterhouse steak from Morton’s Hackensack. 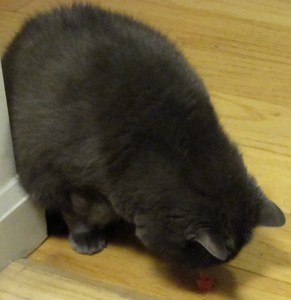