That&#039;s not funny! Five Rules for Handling Humor With Your Brand

This post may or may not be NSFW, depending on your view of what “NSFW” is, which is the whole point of this freakin’ post.

I was once in a long-term relationship with someone. We went out to dinner to meet two of her friends I’d never met before. About an hour into dinner, when everyone was loose and having a good time, and the male friend cracked a pretty ribald joke about sex. I thought it was hysterical, and had to counter. So I did, with the following:

I, of course, was there all like “What did I do?” So much for dinner. Needless to say, we’re no longer dating.

The key, my friends, is to know your audience.

Yesterday, wrote a post about 7-Eleven and their misguided Facebook status update about mental illness. The comments were interesting – They ranged from “Stop being so PC!” to “Yes, this is awful” to “Well, 7-Eleven’s Brand is all about helping people and they’re huge with donating to MLS, so this is a shame.” That comment got to me the most, and inspired this post.

If you’ve ever met me, you know that I’m the last person anyone would think of when they think “politically correct.” I have a totally random sense of humor, and find things like this funny:

Yes, that was Ernie Anastos of NYC Newscasting fame telling his reporter to “Keep fucking that chicken.” I must have watched that two hundred times, and it just got funnier and funnier. Watch it again and look at the female newscaster’s face after he says it. I’m laughing now.

Let’s transfer that to your business: “Your sense of humor is not necessarily your customers’ sense of humor.” And the more customers you have, the bigger chance you have of offending a portion of them when you post something.

So does that mean we all have to sit with our hands in our laps, posting only the most benign stuff? Of course not. But we do need to think. With that, here are five rules you might consider implementing into your social media guidelines for interactions involving humor.

1) If you have to ask yourself “Will this be ok,” then it probably won’t be, no matter how much you try and rationalize it. In the first hours of the Earthquake in Japan, I tweeted out a post referencing Godzilla. My rationale was that humor helped people. We didn’t know about the massive deaths at the time, but even if I did, I shouldn’t have posted it. I did, and I took my lumps for it. I apologized, and life went on, but it was a learning lesson.

2) Your social media person’s sense of humor may not be your brand’s sense of humor. This one is huge – Chances are, the person who posted the 7-Eleven update thought it was funny – And therein lies the problem – It doesn’t accurately represent the brand. I doubt 7-Eleven thinks that making fun of the mentally ill is a good corporate stance to take – The person in charge of your social media campaigns needs to understand that it’s not them posting, it’s the company. This is yet another reason why you don’t allow “the intern” to handle social media for your company. Social is yet another public face of your company. You wouldn’t let “the intern” issue press releases, you shouldn’t let “the intern” have control of your social media identity.

3) You’re never going to make everyone happy all of the time. In the end, it’s going to come down to what you’re comfortable with, and what your audience is willing to put up with. If you don’t mind losing a few now and then, have some fun. That’s kind of the motto to which I subscribe. You’re never going to please everyone, and you can’t sit there handcuffed, afraid of offending even one person. This is a public world. You’re going to offend people every once in a while, no matter how much you try not to, and that’s not necessarily the worst thing in the world. Just be aware of how your brand is affected, and also remember that jokes that you post can get you in trouble via viral a lot quicker than you might imagine.

4) None of this applies to brands that just don’t give a shit. We all remember the Kenneth Cole debacle regarding Egypt, right? 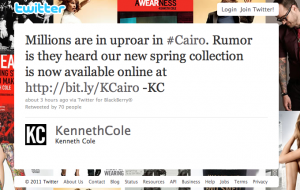 It took them forever to issue an apology, and in the end, it was half-hearted, at best. Did KC lose customers? Possibly… But they didn’t care. They subscribe to the Dov Charney school of customer retention. If you work for a company like this, (and you can live with yourself,) go to town. You’ll have a great job.

5) Finally, you will screw up, and you will remember that this too shall pass. Can’t tell you how many times I’ve done something stupid online and thought it was the end of the world. There’s a reason I no longer bring my Blackberry the few times a year I go out drinking with friends. The key is to get past it. You do that by issuing an apology if warranted, and hopefully, trying to use it as a learning lesson for your company. If you learn something from it, the headache you get is worth it.

What else? Talk to me about humor, what’s appropriate and what’s not, in the comments below.