I completed my first Half-Ironman in four years on Sunday, and chose Ironman Atlantic City 70.3 . Close to home, (NYC,) and a whole bunch of my friends were racing it, as well.

Atlantic City is right up there with “locked in a room with all my ex-girlfriends” in the “places I’d like to spend a weekend” category. But thanks to my idiot training partners (and I use the term “idiot” with nothing but love,) Atlantic City was where I found myself last weekend, competing in the 2016 Inaugural Ironman 70.3 Atlantic City. (70.3 being the cool new term that’s replaced “Half-Ironman.”

I’ve done a handful of half-IM races before, so I kind of knew what to expect. However, my last one was four years ago, not counting Ironman Louisville, where I technically completed a full swim, full bike, and half-marathon before being pulled for heat exhaustion, so I don’t count that.

First things first: Differences in me: I raced IMAC at minimum, 25 pounds lighter than my last Half, the Memorial Hermann 70.3 in Galveston, TX, four years ago. Since October of 2015, I’ve been training religiously, both cardio and lifting, as well as being fanatical about what I eat, and the weight has come off. I’m around 210 right now, with another 30 pounds to go (that’s probably too much for me at a very broad (big-boned, as they say) 6’ tall, but whatever. I want to try and see if I can touch 180 again for the first time since High School.)

The other major difference was the amount of time I put into the bike – Without realizing it, I’ve been training on the bike more than swimming and running by a ton over the past eleven months, primarily because whenever I needed a cardio hit and I didn’t want to overtax my legs, or hurt my knees or my hips, I’d go to New York Health and Racquet Club and sit on the recumbent bike for an hour. Turns out, if you do that enough, you’re going to get faster!

So the swim… 1.2 miles, shortened to 1100 meters, (and then shortened again, but not for me, to about 900 meters or so.) The current was brutal. It was a crowded swim, with everyone trying to find a place where the current wouldn’t attack us – Which meant a lot of swimming over each other, trying to survive. More than once, I found myself constantly fighting over people or zigzagging to get away from people, getting kicked in the head, getting kicked in the stomach, getting punched in the head. It was a very difficult swim. My swim time: 48.56, or a 2:32 per 100 meters. Not happy with it as I said, but it was literally like swimming on an incline. Not recommended. On the plus side, though, I was able to get out of the water and onto the bike rather quickly, thanks to my continued decision to never wear a wetsuit. It’s not a swimming thing (although I think I swim fine without one) as much as is it a “I don’t like looking like a manatee dropped on a dirt road while trying to get the damn suit off of me” thing. Or, as those who happen to enjoy Pokemon note, I don’t want to look like a Magikarp. 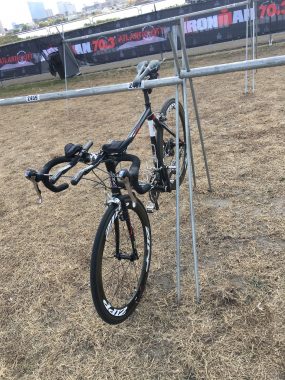 The bike: Here’s where I shined. (Shone?) What amazed me the most about the ride honestly was how fast I went. I had talked to my coach, earlier in the weekend and I told him I was feeling really ready for the ride, not so much the run obviously because of my hip, but because I had ridden earlier this summer and for 18 miles, I was holding 18 miles an hour. I explained how I’d love to be able to hold 18 miles an hour for the entire ride of the half Ironman, to which David replied “well, that’s really hard to do, since 56 miles isn’t 18 miles.” He wasn’t psyching me out or anything, he was just being realistic. So going into the bike, I wasn’t holding my breath. I figured I could come close, and made a promise to myself not to look at the numbers at all, until I finished the race.

I turned on Runkeeper and ran out of Transition. (Hard to do on an iPhone when your fingers are still wet from the swim.) Jumping on the bike, I got yelled at by an official: “NO PHONES!” It wasn’t like I was live-tweeting the race, I was simply trying to track my time. I threw the phone in my jersey pocket and took off. The bike course itself was pretty beautiful. It was a lot of farmland, a lot of forest, once we got off the AC Expressway and past the airport, which was boring as hell. But from mile 12 to 45, it was pretty beautiful. It was forests, landscape, very large houses on tons of land, all of which are still less expensive than my two-bedroom condo in Manhattan. (Grr.) There was one point where we biked for about two miles past a forest, and I swear to God, it felt air conditioned. I don’t know what science made this happen, but the temperature dropped about 15-20 degrees. It felt like biking in a Cryo chamber, it was awesome. Very, very cool and peaceful. Lasted for about two miles.

Saw a few bad wrecks, hopefully everyone turned out OK… Speed is never worth wiping out.

As per usual, I recited the entire script of Back to the Future, (don’t ask me why I know it by heart,) which has become habit on long rides where I’m not allowed to wear headphones. Keeps the ADHD at bay.

Onto the run. I knew it was going to be tough – I’d blown out a muscle in my left hip a few weeks prior, primarily from sitting on international flights for 14 hours at a time, then training the next day with runs anywhere from six to nine miles. I visited my sports Doc who told me I wouldn’t hurt it anymore by running the race, but it would flare up during the run, and I’d probably have to walk. But getting his green-light, I said the heck with it, and I ran.

First couple miles on the run I just couldn’t get my legs back. I had pushed so hard on the bike that I had nothing. (Note to self: DO MORE BRICKS.) I walked the first two miles, oh, and by the way, they were on an abandoned airport runway field. Nothing like going backwards and forwards like you’re in line for immigration at some third world country for the first few miles of your race, while frying like an egg in a pan. Temps by this point were in the mid-80s. Lovely. 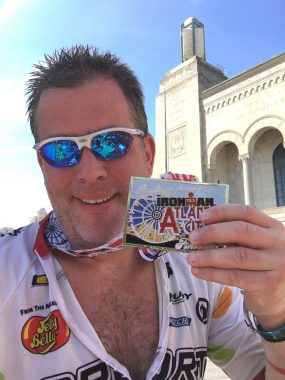 Finally got my legs back around mile three, and was able to run without any problems or pain, (and even felt like I was holding a decent pace) until around mile seven, when my hip muscle looked at me and said “we’re done.” I couldn’t run without shooting pains through my hip, and I knew I’d be walking the rest of the race. Was finally able to run the last quarter mile, but in excruciating pain. Considering I ran a 2:08 half marathon in Brooklyn a few months ago, a time of 3:04:47 was NOT what I was hoping for – But, even with a busted hip, I beat my last Half-Ironman run by over six minutes.

End result: It’s not rocket science. Lose the weight, do the training, and you can get faster. I can’t believe my bike time, and it’s given me SUCH a boost for future training – I’m building out my 2017 race schedule now, and I think it’s possible that a 2:45, maybe even a 2:35 bike leg could be in the cards!

As always, this data comes courtesy of Runkeeper, and my training incorporates WiThings and MyFitnessPal – I couldn’t even imagine doing any training without all three – And I’m not just saying that. To have the mapped data, the splits, to do comparisons of last time and plan for next time – I’d be nothing without the data. The WiThings scale and the macros on MyFitnessPal are game-changing for me. For the first time, I truly felt like I was actually training, as opposed to just “working out towards a goal.”

tl;dr: Swim was hell (really bad currents, they shortened it for everyone, then shortened it again four waves after mine,) bike was AMAZING, my left hip blew out on the run, but I expected it to. Overall, happy, over an hour faster than my last half Ironman, and now have several new goals to reach in 2017.