Why did a Car Company invite a Carless New Yorker to the International Auto Show?

I just got home from a snowy and cold Detroit, Michigan, where I was a guest of Ford Motor Company at the North American International Auto Show. (NAIAS.) An amazing event, with not only every car company known to man represented there, but some very cool “non-car” stuff as well, including a TED talk, and a Mayor’s roundtable, all presented by Ford.

I found myself surrounded by several other influencers, who all had one particular commonality that I lacked: They all lived in places where they owned, and drove, cars every day. Me? I’m really good at hitting “now” on my Lyft app.

So why me? Surrounded by 24K and Geekazine, I was the odd man out.

Or was I? Perhaps I, the non-car guy, was invited to this massive car event, because Ford is no longer a car company?

Think about it – In addition to the announcements that everyone loved hearing from Ford, including this:

Breaking: @Ford is bringing the #Bronco back!! #NAIAS2017pic.twitter.com/C1kMIlN3SW

Ford spent a lot of time talking about things that car companies didn’t used to talk about: Like public and private partnerships:

and investments in public infrastructures: 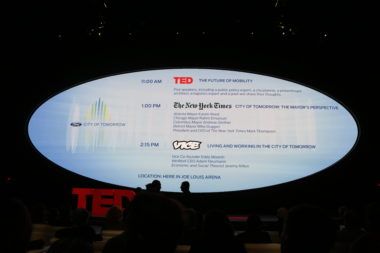 So perhaps the real reason Ford Motor Company brought a non-car guy to a car show is because Ford is looking past cars – And to the future of logistics. And if that’s the case, that’s like bringing a Lamborghini to a horse race. Talk about forward-thinking. If Ford understands that the future isn’t selling cars alone, but understanding where people live, how economies are going to work, and how transportation,  – whether your own or shared – fits into that, then they’re not just a car company – And that just might be the best future there is.

Disclosures: My friends at Ford paid for my travel costs to attend NAIAS – I wasn’t instructed or obligated to write anything, pro or con for Ford or NAIAS.