Stop Being the Smartest Person in the Room

I was fortunate enough to be invited to a dinner last night, where I joined 15 people in eating some great food at CraftBar, and listening to Neil Golden, former CMO of McDonald’s, as he dropped some serious knowledge on the dinner table.

What struck me most about this dinner was that everyone there (except Neil) was a founder or CEO of a company. They were all in varying stages of startup, and it was amazing to hear their stories. Over the course of a few hours, I realized something really interesting – I was most definitely not the smartest person in the room, by a long shot. 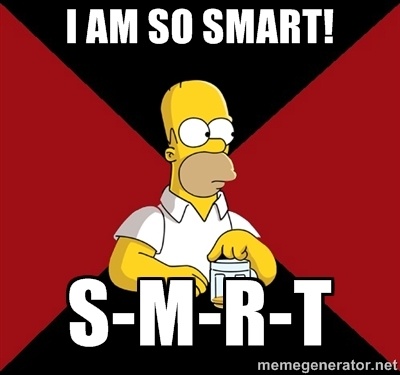 Now, I’m not saying I’m brilliant all the time, but when you get paid to give speeches to audiences of 10,000 people, you start to think that you might know a little bit about the topic on which you’re being paid to speak.

That’s why it was so amazing to be surrounded by Neil and the others at this table – For over two hours, I just shut up and tried to take it all in. I left the restaurant with more knowledge and more ideas for things I wanted to do than I’ve had in the past three months. It was pretty awesome.

So… Think about this – If you’re always the smartest one in the room – Is that always in your best interest? When you go to dinners, are you the one everyone comes up to talk to, or can you take the time to listen to conversations and gain something from what you hear?

Believe me, I understand what a nice massage to the ego it is to want people coming up to you and asking you questions – But it’s just like working out – If you’re not constantly lifting heavier and heavier weights, or trying to run faster and faster, you’ll plateau, and eventually you’ll be overtaken.

If you’re always the smartest person in the room, you’re in the wrong room. (Tweet this!)

Start introducing events into your life where you’re not the smartest person in the room. Hang out with people smarter than you – It’s the only way you’ll improve.