With the rumor that Twitter is going to create their own photo sharing/hosting platform within their own walls, it’s time for businesses to start getting serious about using photos if they’re using Twitter. The following are best practices on how to do just that.

Know your audience. Before you even look at taking photos and posting them to Twitter, you have to ask yourself the most basic of questions: Is your audience on Twitter? According to eMarketer, only 20 million Americans visited/used Twitter last month. While that’s a decent number, that leaves a few hundred million potential customers choosing to get their information in other ways. If you’re not finding them where they are, all the best practices in the world won’t help you. Find out where your audience is before you start posting anywhere with reckless abandon.

Assuming you have a decent audience following on Twitter, it’s time to start implementing photos. Here’s how:

1) Throw out the old Instamatic. Nearly every decent phone has a built-in decent camera. iPhones, Droids, even Blackberries are fine – But do some basic homework. Make sure your lighting is decent. Try not to have to use a flash if you can avoid it. Natural light works best. Avoid harsh shadows, as most camera-phone cameras don’t have the ability to distinguish light from dark in anything more than a primitive way. Soft, natural light is best for whatever your subject is. If you have basic photo skills, by all means, use a good digital camera, drop the size, and upload. As good as a cameraphone camera is, nothing beats a decent SLR.

2) Size matters. Remember that your photo quality, while it needs to be good, doesn’t need to be a billion megapixels. You’re posting to Twitter, not to the front page of the NY Times. Use the best quality resolution you can without requiring each photo to use a T3 hardline to upload. Chances are that Twitter, much like Facebook, will auto-compress the photos once you upload them, so large file size won’t kill the network. That said, it’s even more important to make sure your lighting and focus are stellar. Bad lighting on a huge file is easier to fix than bad lighting on an already-shrunk image.

3) Who cares? Before every photo upload, ask yourself “Why am I posting this?” Is it a fun photo? Is it something that will entice my audience to buy my products? Will it engage them into further conversation, leading to conversion?

4) Don’t be a product-whore. Posting a continual stream of photos of every product you sell doesn’t make you a power-Twitter user, it makes you a catalog. And no one wants to see a catalog in their Twitter stream. Be selective. Overposting, just like oversharing, is a guaranteed way to lose followers. 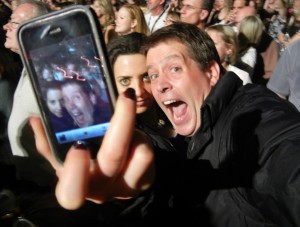 5) Keep it interesting. “Games” Magazine used to have this really cool page where they’d post extreme close-ups of every day products, challenging the reader to figure out what they were for a prize. Can you do the same? Of course you can. New line of purses? Show just the clasp. Shoe? Just the heel. Dog leash? Just the loop. Have fun and experiment, and engage with your audience to encourage them to buy, as well. (But don’t market TO them – audiences hate that.) Include a link to the product page if you’d like, but again, not every photo needs to be product.

6) Offer “backstage access” with your photos. Got an event? Show scenes people normally wouldn’t see. One of the coolest photos I ever saw came from a NASA tweeter, who posted a photo from the wheel of the pad that rolled out the shuttle. So cool to look at, and encouraged me to follow not only him, but a ton of other NASA tweeters. Events and the like are made for Twitter photos, but again, be selective.

7) There’s “sharing,” then there’s “bragging.” It’s great if your product is in the Oscar gift bag and you get to go, but 75 photos in a row of every celebrity you’re meeting is bound to annoy the hell out of people. Again, it comes down to being selective. A handful are fine. Any more, and you’re going to start losing supporters.

8) Engage, engage, engage. Remember: an ad is a one way street, Twitter is a boulevard. If you’re launching a new product, post photos of the design – Encourage user feedback – Make the audience a part of the new product build. You’re encouraging user participation, and making your audience feel like they had a hand in the new build. What happens then? They’re more likely to purchase, leading to revenue generation and sales.

9) It’ll always be about the Benjamins. Finally, remember that photos are just another part of social marketing, which is just another part of the marketing channel as a whole. If you can’t tie everything you’re doing back to revenue and sales, you need to reevaluate how you’re using social. Remember: No CEO or beancounter believes that “cool” trumps “revenue,” and they never will.