Whenever I talk to other CEOs or other people in industry who have “made it big,” one of the things I always ask is if they’re thought of as a “nice guy” – by their friends, employees, competitors, clients, etc.

The CEOs usually launch into a litany of reasons why they’re “nice guys.” They donate to charities, they sit on the boards of nonprofits, they help raise awareness of critical issues, and so on. But in answering my question like that, they’re avoiding my question. In the end, if I press them, some of them say that no, people don’t think they’re “nice guys.” Instead, the words that usually come up are “feared,” “assh***,” and the like.

Their reasoning? They believe that if they’re seen as a nice guy, that’s a sign of weakness, which will negatively impact them, their company, their bottom line.

They have a point – but only partially.

The problem isn’t them – it’s society. We’re conditioned to believe since birth, that “nice guys finish last.” “Be harder, play stronger, take no prisoners!” is the attitude instilled into many of us at birth.

And to a degree, that’s useful advice. If a lion in the wild is “nice,” she’ll be killed. If she’s mean and aggressive, she’ll kill, and provide food for her, and for her family.

And you see that in countless books – telling us to think like lions, teaching us how to hunt our prey, attack the weaker, never show any weakness. 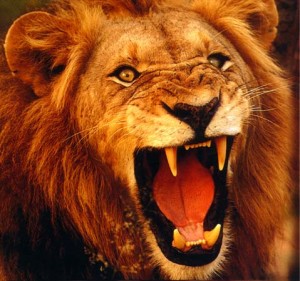 I can haz you as snack?

But there’s one fundamental flaw with that logic. We’re being told that we should think like animals, animals that don’t have the capacity to reason.

That’s what differentiates us from the animals. We can reason. And reasoning can help us to be even more successful.

HARO, by the very nature of what it is, started out as a platform to help people. It started out on Facebook, where I would forward requests from my friends in media, to my friends in PR. That’s it. I did it to be a nice guy, sure. But there was more – I reasoned (and quite logically) that if I was thought of as that conduit, both reporters and sources would want to use me for that – thereby putting me right smack in the middle on the flow of information.

At the end of the day, being “a nice guy,” when well thought out, can propel you into the stratosphere of success, and you don’t have to be “the assh***” to get there.

I always take the first meeting, I always answer the first email. I like to help people. I like to connect people. It’s my nature. It’s in my DNA. It’s not in my DNA to tell people to go F themselves. It’s just not who I am.

Therein lies a problem, though. To some people, my “nice guy” mentality projects weakness. It projects a “I can walk all over him, he’s too nice to fight back” train of thought.

I can see how – If you grow up with the mantra of “the weak are eliminated,” then you surround yourself with people who only have one goal: them. They’ll do anything in their power to win, anything to stop everyone else. So yeah, if you grow up with that, or subscribe to that, of course you’re going to see my “nice guy” mentality as “weakness.”

The problem though, is that if you think along those lines about me, you’re 100% wrong. And that’s a mistake that can kill you.

To a smart person, the chasm between “nice guy” and “weakness” is like the difference between Albert Einstein and Tila Tequila. One in no way is the other.

I’m a nice guy. But I’m the furthest thing from weak you’ll ever see.

At the end of the day, the smart “nice guys” tend to have more “lion traits” than the ones who try and emulate the lion. Why? Because we have to. There’s always someone trying to take advantage of us.

But – never, ever confuse that for weakness.

Because what you don’t see, what I rarely have to bring out because I am nice, is my teeth. I have sharper teeth than you. That’s a fact, end of discussion. See, “nice guys” usually do. My fangs can cut through you like a hot knife through butter, and if finally provoked to that point, I won’t even try to staunch your bleeding. The difference between me and the “take no prisoners” guys, however, is that to me, my fangs are a last resort, not a first line of defense.

And any last resort is the one with the most power behind it. It’s a last resort. That’s the point.

If I’m threatened, if I feel like I’m being taken advantage of, or if I feel like someone is trying to use my “nice guy” attitude to take what is mine, I’ll come down on you so hard, you’ll think you just got struck by a freight liner. Why? Because you didn’t expect it. You assumed “Oh, he’s nice, he won’t try and fight.” You’re wrong.

Remember – I’m the kid that got made fun of growing up for simply being Jewish and fat. And after a while, all that rage I felt built up, and exited my body one day in a dead-on, 100% accurate punch to the left eye socket of a junior high school bully. And the entire school learned that day that they’d confused “nice” with “weak.” And I guarantee you, they never made that mistake again.

I have the sharpest team of lawyers, advisors, and counsel that you never, ever want to meet. And the funny thing, is that most successful “nice guys” I know do too. Why don’t you know it? Because we rarely have to bring them out. We run our lives in such a way, that they rarely have to show their faces.

Until they do. And by that time, well, chances are, it’s way too late for you to do anything about it. You had your chance. You underestimated. And it’s a hard lesson to learn.

You know, it’s funny – one of the greatest military strategy books EVER, is called The Art of War, by Sun Tzu. But what’s ironic, is that the reason Sun Tzu was such a great military strategist was because he encouraged never fighting unless absolutely necessary. Rather, he chose every other method first:

I’m never going to stop being nice. It’s who I am. Thank my parents. I enjoy living my life this way, I believe it’s karmically good, and I encourage you to try it, as well – But don’t ever, not even for a second, confuse my niceness with weakness. It will cost you. Severely.