Have you joined my incredibly non-annoying, once-in-a-while email newsletter?
The morning dawned grey and hot, as every morning in Singapore has so far.

And it saw me stay for five minutes, schmooze, network, drink two diet cokes, and promptly go back to my hotel room to work for three hours.

On the plus side of that work, though, among other things, OpSec Security resigned with Geek Factory for another year. That thrills me. They’re such a fun client. Thank you, guys.

A few fun photos before the madness of the conference starts…

At Raffles Plaza Mall near my hotel, there’s a really cool fountain that, in addition to the usual “spray water straight up” thing that fountains do, actually plays with the water in the pool. By spraying out water from the base of the fountain into the pool already, it can create intricate designs in the pool of water itself – something I’ve never seen done before in any other fountain. What a cool concept! 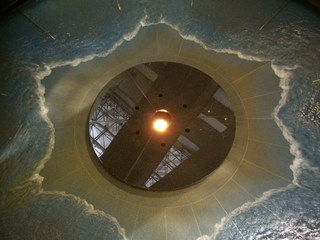 Thanks to the “food” setting on my Exilim, I can now show you, in stunning clarity, what I’ve been eating this past week. Only two or three photos, I promise.

You can get a variation on this theme of “soup, noodles, and chives,” at virtually any stall in Singapore, and they’re all as good. Seriously good. And filling! And hot! 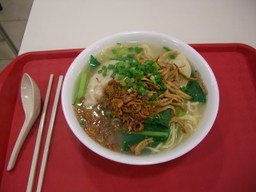 Now this… Well, there’s probably no real way to describe this other than to say “Hot dog stuffed with Mayonnaise and red peppers.” I know. I’m sorry to subject you to that. But I gotta tell you – It was sick good. I mean, SICK GOOD. And while I’m guessing the bun had processed sugar, I’m happy to report it was the ONLY processed sugar I’ve had the WHOLE TRIP. Good G-d, though, was it good. It was also eaten about three hours before my “race from hell,” so it was, without question, burned right off. 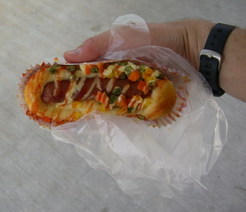 Finally, for like, $2.20, you can buy a whole Coconut, that they’ll hack open for you. I felt like Les Stroud. 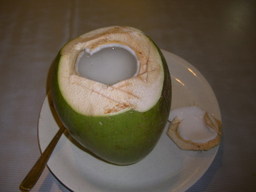 More later. I’ve now got to open the second day of this conference.