Be of Good Chair! Ha! I slay me! OK, but seriously…

So for all those who don’t know, I have the worst back in the world. My L4/L5, and L5/S1 Vertebra have never liked me. In fact, they go out of their way to hate me. It could be anything – Lifting, at the gym, a bad step off the curb… You name it – Doesn’t matter what it is, but my back goes out about four times a year, and usually takes a week or so to heal. If I laid down inverted for six months and never moved, that might solve the problem. But in the meantime, since that won’t be happening anytime soon…

I was approached by the amazing people at Relax The Back, who asked if they could hook me up with a chair that might make sitting at my desk on a daily basis easier to do. Who am I to argue with that logic? But I also asked them if they’d be so kind as to award one to one lucky member of my audience. They said they would!

So… I’ve got a chance for you to win the Lifeform Ultimate High Back Executive Chair! It’s a chair that starts out at $1,750! That’s a serious chair! Check it out: 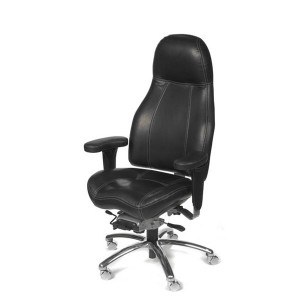 To win it, all you have to do is the following:

2) Tell me below, in the comments, WHY you need this chair. I want to hear a sob story here, people. Tell me about how your boss whips you daily and makes you sit on a spiky milk crate. Tell me how you have to update 47 websites a day, all while standing on an open fire pit, barefoot, while Alanis Morrisette songs play on repeat. I want to hear the best ones.

3) The saddest story wins the chair!

You gotta agree to this, though: After you get your chair, you have to send us some photos of you in it – We’re going to want to put some photos of you up on the site! So if you’re cool with that, go “like” them, then give us your story! We’ll pick a winner around the first week of February or so. Let’s hear it!

Big props to Relax The Back for this awesome giveaway!

Tracy and TJ Mehan:
I’m actually hoping to win this chair for my husband. Six months after we were married (in 1998), he was injured in a night jump while he was serving in the 82nd Airborne division of the Army. When I got to the hospital to see him, he had his toe tags on because they thought he had torn his aeorta. In fact, he broke 8 vertebrae in his back and lost 3 inches in height from the spinal compression. We joke now that we got the “for sicker and for poorer” part of our wedding vows out of the way early in our marriage but in reality he lives with pain every day. He recently started working from home and the chair he has is making the pain worse. I’d love to be able to give this to him for our 15 year wedding anniversary. Pick me! Pick me!