I Know More About You Than You Think…

This is a post in the continuing series of How to be Taken Seriously. In this post, we’re going to discuss how the littlest things can tell people so much about you, before you’re even aware they are.

Nathan Muir: You just gave her four pieces of personal information for one dubious impersonal fact. 1) You’re straight, 2) You’re engaged, 3) Tomorrow’s your girls birthday, and 4) You have terrible taste in women’s clothing.
Tom Bishop: Just trying to find out where she got that dress.
Nathan Muir: What if she were an asset? You told her four lies that now have to be true.
Spy Game, (Robert Redford, Brad Pitt) 2001

This afternoon finds me on an Amtrak train, headed from NYC to Philly, to keynote the National Council for Marketing and Public Relations’ National Conference.

As I sit down, I’m joined across one of those Amtrak-tables by a young woman, who drops her stuff on the seat next to her, and puts her ticket on the table while taking off her coat.

Of course, I notice the ticket, which clearly displays her name and destination city. It was seven inches in front of me. Stevie Wonder could have read it.

What did I do? Of course, I Googled her name off my Blackberry. Within fifteen seconds, I found her Facebook page, her Twitter page, and a blog post she wrote on luggage.

Her Twitter page, although protected, says she’s studying law, but also looking for a PR job. OK – Lawyer to PR? Stranger things have happened, I suppose.

Knowing she’d written a blog post on luggage, I started a casual conversation about her purse. She started talking about it, and that led to pretty standard conversation – The usual “what do you do, where are you from,” etc.

“I work at a PR firm,” she said. This contradicted her Twitter bio, which said she was in law school, but looking for a PR job when she graduated in May of 11.

She hesitated a second, and said “Oh, I’d rather not say.”

“You’d rather not say at what PR firm you work? Don’t you call reporters and write press releases with your name on them?”

On one hand, she could truly not want to share her information with people she just met on the train. That makes sense, I guess. But on the flip side, something didn’t seem right. Unless she was an Air-Marshall, (Train-Marshall?) something wasn’t adding up.

I didn’t press her on it, and I opened my laptop to let the conversation die. But it started me thinking…

We live in a world that is easily accessible. Call it “unknown brand awareness.” The second you say anything, anyone who hears it has the ability to start looking around for more information. For me, it was simple – her ticket was right there. But in other conversations, it’s just as easy.

Back in the 80s, top-level computer hackers like Kevin Mitnick used to call it “social engineering.” Asking seemingly innocuous questions to get you to reveal as much or as little information as they needed to complete their hack. Something as simple as “do you have any pets” could more than likely tell them your computer password. 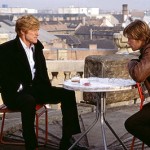 While we’ve “grown up” a little bit since the 80s in terms of computer security, we haven’t really done so in other ways. We put massive amounts of information out in the open – not just on Amtrak-tables, but in tons of other ways. I’m not even talking about the weird people who wear their passports and airline tickets in a wallet around our neck for the world to see our most personal information.

How many of us have a sticker of the company we work for or our website on our laptops? How many of us wear t-shirts to the gym with our logo on it? In the age of everyone having an avatar, it’s not hard. The girl sitting next to me has the same profile photo on Twitter and Facebook, and one look tells me that it is in fact her.

So what can we do to be taken seriously in this new world of easily identifiable information?

1) Get your background story straight. If you have anything to hide, make sure you don’t give me the most basic information to prove you wrong before we even have our first full conversation. Spies are amazing at this. They can tell you hours of information, and when you sit down and analyze it, you realize they’ve told you absolutely nothing of any value whatsoever.

2) Post information, but be careful about what information you post. This girl at least had the basic security enabled on her FB and Twitter accounts. What if she didn’t? I could have engaged her for over an hour about anything, and made the conversation seem so very innocent, yet by talking about specific items, I’d get her to tell me tons.

Fact is, people feel comfortable when someone else brings up something about which they know a bit. It breaks down social barriers faster than a tab of ecstasy. Think about it – If you own a dog, and someone talks to you about dogs, you want to engage, you want to keep the conversation going – You share photos, tell your dog’s name, at the very least. From that, I can get a lot more information, simply by listening.

3) On the flip-side, it’s amazing how much information people put out there that we can use to our advantage, if we’d simply LISTEN once in a while, and not just wait for a break in the conversation so we can talk again. The most basic things can lead to full-on interaction. Don’t believe me? Listen the next time the idiot next to you somewhere is on his cell phone. People talk about personal information all the time, like they were the only one in the room. They’re not. Fortunately for them, most people don’t listen either, so it’s a null/loss situation. But get someone like me in the room, someone who actually does listen because it’s fun, and it’s a whole different ballgame.

4) Finally, be aware that your brand, something I talk about all the time, is open for perusal twenty-four hours a day. The age of lying is over – This is the age of “you gonna get caught.” That means if you post one thing, and say another, it’s not a question of “if” you’re going to get caught, it’s a question of “when.” And perhaps it won’t be by someone like me, a bored traveler on a train to Philadelphia. Perhaps it’ll be by a hiring manager. Or a spouse. Or a reporter.

Want to be taken seriously? Start by being smarter. That goes for all of us.

Oh – And keep your damn Amtrak ticket in your POCKET.