OK. This is a little bit weird.

Remember a few days ago, when I posted how J-Date’s Darren Sherman became Darren Kamowitz?

OK. Well, that story came to be because Darren Sherman was interviewed (as Darren Kamowitz, CEO of Regulatory Advisory Services) in an article in Business Finance Magazine.

Well, today, a PR.D. reader posted a comment on that post, saying that Business Finance Magazine dumped Darren out of the online version.

Which is odd – but even more odd, is that they did so without printing a retraction – They did so by no longer attributing his quote to him, but just changing a few words so it didn’t look like a quote – but it’s still his words! (And it’s still, as I’d assume, in the print edition!)

That, to me, is very, very, uncool. Regardless of what we think of the Darrenator, he gave the original quote – if you’re gonna cut him, cut the entire quote.

Business Finance Magazine: You interviewed the SEC official, you wrote down the words, now do the right thing. (Sorry. Couldn’t help it.) But seriously – not cool – both from a “how you treat your sources” way, as well as just from a journalistic standpoint.

Oh, best part? The article was on HOW TO RESTATE EARNINGS. The irony just came out of nowhere and punched me.

Current version of Business Finance Article from their website: 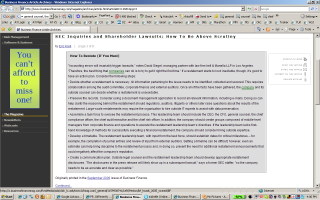 Now check out the cached version from Google: 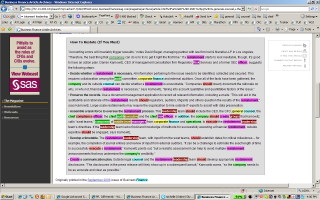 That’s kind of Snarky of Business Finance Magazine, huh? Again, note the irony that the headline of the article they changed and didn’t mention is: SEC Inquiries and Shareholder Lawsuits: How to be above scrutiny.

How about: Make a comment on the site when you cut stuff out. I’m not commenting on the editorial decision to cut stuff out or not – that’s up to you. My question, though, is if you’re gonna do it, shouldn’t you be like, honest about it?

I’m seriously at the point where I’m considering doing what Llyod Grove did, when he swore off Paris Hilton – I’m thinking about swearing off Darren… Give the guy a chance to live this down and move on… I saw a special today in the airport President’s Club on Bill Buckner: 20 Years Later – Perhaps that’s what made me think about it.