Dear two high school kids I briefly met on the M-11 this morning as I was coming home from Temple and you were heading to school:

I knew you were in high school because one of you asked if the other one wanted to sign your yearbook. When I saw the yearbook, I realized that we in fact went to the same high school, and I graduated 18 years before you. I graduated the year you were born.

With that that unbelievable fact rolling around in my brain, I’m going to take the liberty of the elders, and offer you some un-asked-for advice. Do with it what you will.

As you pack up your things, and spend the summer getting ready to head off to college somewhere, remember that you’re coming from an upbringing in the greatest city in the world. That means you’re going to be light-years ahead of whomever your Freshman year roommate happens to be. But… Don’t look down on them. While you might be ahead of them from a “city street smart” perspective, never forget that they’ve got eighteen years of experiences of their own to share. You can learn from them, if you let yourself. This goes for everyone you meet throughout your life. The ability to stop talking, and actually listen once in a while will be one of your greatest assets. I promise you this. Don’t let it take you 18 years to learn.

At some point during your freshman year, get your butts over to the study abroad office and introduce yourself. You think you’re bogged down with work during “finals?” Wait until you’re 10 years out of college, on deadlines, and the choice isn’t “go to a bar and pull an all-nighter to write that paper or ask for an extension,” but rather “finish the client report, don’t go out, probably skip dinner, get two hours of sleep and be back in the office at 7am, or get fired.” Your workload during the next four years won’t have ANYTHING on your workload for the 40 years after that. Remember that, and study abroad for at least one semester, if not more. If you don’t do it, you’ll be kicking yourself every day that you didn’t. See the world while you still can. I promise you – traveling the world on business is NOT the same as traveling the world for exploration. Every conference room will ALWAYS look the same on a business trip, whether Phuket or Peoria. Trust me on this. Do it now. Need even more proof? Read this: Confessions from 8,000 Miles Away.

Expect greatness, prepare for utter failure and never be unwilling to change. You’re going to have incredible moments of greatness in your life, I promise you. The things you’re going to do successfully are so incredible, your little high-school brains can’t even begin to process them now. You’re going to be amazing, I have no doubt.

However, whatever you think you’re going to do now? I’m pretty sure it’s not going to happen. Since I was in your seat on that bus, signing someone else’s yearbook, I went from Stage Crew Manager, to journalist, to photojournalist, to model photographer, to playboy photographer, to online journalist, to publicist, to entrepreneur, to philanthropist – all of which I still do to some extent, and none of which were planned. That’s the beauty of where you are. You’ve got no IDEA what’s ahead – and therein lies the fun. Don’t ever forget – it’s fun to be surprised. God, my classmates? You’re an Art major now? Never planned on being a broadcast announcer for a Satellite radio channel, huh? Vocal major? Wasn’t in the cards to be a banker in Phoenix, huh? Actor, with brothers making up all of the other Wayans? Never planned on being… Oh, wait. I guess you did know you’d be an actor, Marlon. But for almost all of the rest of my classmates? We were so sure, and so steadfast, and now? Light years from what we thought we’d be. And that, my new friends, is the best part.

Finally, to round out the holy trinity of two paragraphs ago, know this: You’re going to screw up the likes of which you never thought possible. Wow, you’re going to screw up. And it’s not going to be a one time thing, either. You’re going to screw up so badly, you’ll want to hide under a rock and never, ever come out. You’re going to make decisions that looking back on them, you’ll wonder what you could have possibly been smoking – no one is that stupid! But you’ll be that stupid. I promise you. We all were. I especially was. Hell, I still am now from time to time. But here’s the key: The secret to surviving it is two-fold: You’ve got to learn from each moment of stupidity. If you don’t, that only compounds the stupidity. But if you learn from it; if you say “hey, I messed up, here’s what I did, and here’s how I’m going to make sure I’ll never do it again,” and finally, if you’re not afraid to say you’re sorry, then the mistakes are worthwhile. And secondly, you’ve got to surround yourself with good people. I mean, really, really good people. People who you trust, people who you know will be there for you, no matter how much of a screw-up you’ll manage to be from time to time, people who will never, ever let you down. But here’s the caveat: To surround yourself with people like that, means that yes, you have to be one, as well. And you’ve got to be forgiving when they screw up, too. Because they will. We all will.

Last thing: Laugh. No matter what happens, laugh. Try and love someone, and try and let someone love you. Know you’re going to get hurt, but also know that you will always be strong enough to get through it. And finally: Know that no matter what happens, no matter where your travels take you, no matter who enters your life or who leaves it, no matter whether you become famous or obscure, whether you’re rich or poor, just know: You’re you. You’re unique. You’re made up of stuff to which no one else can ever, ever lay claim. And no one can ever take that away from you.

Good luck, kids from LaGuardia High School, class of 2008. I so very much envy the journey you’re about to take. 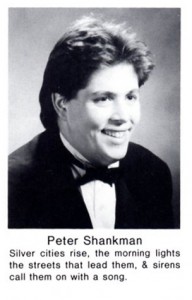