A Tech Problem is still a Customer Service Problem, Foursquare…

Update: Foursquare got in touch with me and explained the problem I’m having. They don’t have a solution just yet, but have added me to the beta list to help test a solution when they find one. Additionally, and and I dont believe connected, Foursquare appears to work in Cape Town, South Africa. At this point, it seeme to be an issue of what the network I’m on is vs. the network Foursquare believes me to be on. Will keep you updated.

So I just landed in Frankfurt, Germany. Got ten hours to kill here on my way to South Africa.

As the plane taxis to the gate, I launch Foursquare on my Blackberry Bold WorldPhone, and as expected, it doesn’t recognize me in Frankfurt, but rather, still in Newark, New Jersey, the site of my last check-in before I took off.

I’ve written multiple times to Foursquare support, and I’ve also filled out several tech tickets, all to no avail. They’ve all gone into a black hole, with not so much as any human acknowledgment that there’s a problem.

I know I’m not the only person to have this problem, as I’ve talked to other Verizon Berry users who’ve experienced the same issues overseas.

I can deal with it saying I’m not close enough to my apartment building to register as I’m sitting on my couch in it. I can even deal with the random deletions of locations, and the all of the features the Blackberry application lacks compared to other platforms. But to completely not work overseas? That’s kind of 100% self-defeating.

If Foursquare won’t work on a roaming network outside of its home network, it’s not so much of a geolocation application then, is it?

Foursquare’s answer appears to be “Get an iPhone or a Droid, or we just don’t give a shit about you.”

I guess the part that frustrates me the most is the complete and utter black hole-like lack of response from Foursquare.

The fact is, if Foursquare has no desire to help support the Blackberry platform, they should come out and say so. They should tell us “hey, it’s not worth it for us to support Blackberry, so we’re just going to focus on iPhone and Droid.” It would suck, but suck much less than what they’re doing now, because at least then, they’d be honest, and I’d know to use something else.

Thing is, any other application on my Berry that has to call to either GPS or cell phone triangulation works flawlessly overseas or on a roaming network. Google Maps works. Facebook Places works. So it’s not a Blackberry issue, it’s a Foursquare issue. And they simply don’t give a shit. 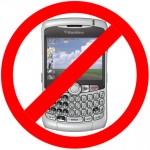 I was one of Foursquare’s first users. I’ve promoted the hell out of it, and become an evangelist because I believed in the concept. But the fact of the matter is, if Facebook keeps building out Places and actually cares about platforms other than the iPhone, it’s a bigger issue for Foursquare than just their Blackberry application not working. It’s symbolic of a bigger problem for Foursquare, which is that they don’t care equally about all of their platforms. Or to destroy a Kanye quote…

When you’re working with consumers, you need to do one of two things. Come right out and say there are certain types of consumers you’re not going to care about, or care about all consumers equally. Right now, Foursquare is doing the former. And that’s going to hurt them in the long run, whether Blackberry survives as a platform or not.

By the way – The answer is not “well, just buy an iPhone.” There are several reasons I haven’t switched to an iPhone, despite being a huge fan of all my other Apple products. This isn’t about forcing me to change, it’s about realizing that abandoning a decent-sized section of your audience isn’t a smart business move to make.

I hope Foursquare gets their shit together. They’re a fun application, and a fun concept. But if I can’t use it, it doesn’t matter how much fun they are  – All the mayorships or badges in the world won’t make up for a horrible user experience.

PS: For the techies: I’m using a Blackberry Bold 9650. (3G/CDMA/Wi-Fi)  Software version 6.0, bundle 1741. The phone is registered on the Verizon network, which partners overseas primarily with Vodaphone. Currently attached to Vodaphone.de while here in Frankfurt. All application permissions set to “Allow.”