When I boarded my flight Wednesday morning from Denver to Houston to connect to a flight to Asheville for my speech on Thursday, I tweeted out a question. I said “I’ve got roughly five hours in the air today. How can I help you? You’ve got 45 minutes to respond.”

So briefly, here’s what people asked, and my answers:

@andreahrizk said that she needs exposure about a shortage of interactive talent in the advertising industry, and included a link: http://imediaconnection.com/content/28737.asp – I think she has a point – Small interactive ad shops can’t offer the same “possibility of instant riches” that tech startups, whether they be in a basement or in the Google offices, can. As such, it’s up to the ad agency to go back to what made them great in the beginning – before “interactive” – If you watch Mad Men, you know that Sterling, Cooper, Draper, Price recruited talent through the excitement of the game – The chance to be creative, the chance to have fun and change how people perceived products and brands. Perhaps we need to go back to basics, and appeal to the creatives’ excitement – not their wallets alone.

@cherylharrison asked me to write her a blog post. You’re reading it! You’re welcome.

@theflaggagency told me that I could book a cruise on the Mekong River or Riviera of Europe. While that’s a good idea, I’m already taking my first actual vacation in about three years in June, and heading to Thailand with someone special. But thanks!

@brokenjules asked if I’d do a Q+A with him or her. I’m doing that under separate cover. Wait for it.

@michaelgruener asked if I know any specific ways to help build popularity and momentum of a social media push for a company with a finite reach. I think one of the best ways to do this for any company is to see what’s going on in the world and attempt to latch onto something newsworthy – but not in a sleazy way. For instance – I can’t see your company right now because I’m at 30k feet and @continental hasn’t added WiFi to their fleet yet (let’s get busy on that, guys, hey?) but I’m guessing by the name (@upRefuse) that you might have something to do with the green world? If that’s the case, simply reading any current magazine should give you tons of of ideas and examples. That rule goes for any company. One of the best ways I know of to come up with new ideas and boosts of creativity is to go for a run with my iPod loaded with the latest podcasts from the BBC, NPR, and the like.

@thebeancast asked for a 1,000 word article entitled “Down and Out on Empire Avenue.” I’ll give you a Haiku, instead. Early Adopter. On Empire Avenue. Can Use Initials.

@cbwebster wants me to come up with a kick-ass in-class project for her business communications class next week. How about working with a local animal rescue organization in your town and helping them come up with a new communications plan that will raise awareness and generate higher levels of donation? Work with them to design a multimedia campaign that focuses on the animals themselves, and what donors dollars can do for them.

@OmniHotelsPR asked me to think about some events that they and I can do together in the fall. That sounds awesome, guys! Email Meagan, my uber-assistant, and let’s get a phone call together. I’d love to work with you guys, perhaps do tweet-ups all over the world! That’s a no-brainer – I love you guys!

@cccreationsUSA asked me to make a Star Wars video to Celebrate Star Wars Day, which is today. I defer to the countless awesome Star Wars videos already out there, including the inclusion of Star Wars in this amazing video from Lego, called Go Miniman Go!

@Drobillard asked to be hired as my personal assistant in Boston. While I’m not currently looking for anyone to hire, perhaps someone in Boston is? If so, why not reach out to @DRobillard?

@BellaBrella asked an interesting question – “How can she improve her image campaign without actually changing who she is?” That’s a good question – If you have to change who you are, then you’re not being true to yourself, and that’s never good. How about rather than changing who you are, changing your audience? Perhaps you’re not reaching out to the right people? If you’re not getting as big of a response as you want, or as large of an audience as you desire, perhaps you’d be better off looking for new audiences? The easiest way to to do that is to continue being who you are, and be more aware of to whom you’re talking – Focus on speaking to the right people – people who appreciate what you have to offer – and by being sincere with them, your rep, and thusly, your audience, should continue to grow.

@thirstybeaverCA (Great name, by the way) is looking for resources on selling ad space on his website, but doesn’t know where to begin. Well, there are tons of sources out there which are great starts, including websites like imediaconnection, adrants, and Digidays, Brian Morrissey’s new project. I’d start there.

@pamasheville asked me to consider voting for Asheville in the Beer City USA Poll. Considering I’m on my way to Asheville, consider it done: http://exm.nr/l0mnCd

@ProSeller1 wants me to help her find one lead in Richmond, VA that’s looking to buy or sell a new house. Anyone in Richmond in that position? Reach out to @ProSeller1.

@wgpr wants to know what Blogs I read. A few off the top of my head include Gawker, A Year To Ten Percent (I write that one, full disclosure,) LeanGains.com, Leigh Shulman, CC Chapman, Fleshbot, Defamer, I Don’t Like You In That Way, Lauren Out Loud, and others.

@homiegcheesefry wants me to tell about my movie project. Well, I’m executive producing a movie currently being shot in Hollywood called “Right Next Door.” It’s a thriller, and I couldn’t be more excited about it. The cast is spectacular, as are the co-directors. I’m humbled to be part of this project, and when it comes out in about 10 months or so, I’ll be throwing one hell of a premiere party, you can count on that. ☺

@cpat71 wants me to learn something from the person next to me. From him, I learned that a pitcher named Francisco Lariano from the Twins got his first no-hitter last night, and also the first no hitter of the 2011 baseball season.

@meducate wants to know the best President’s clubs that Continental has to offer. Well, at Newark, I’m partial to the one in Terminal C closer to gate 81, as opposed the one near security. It’s quieter, more places to work, and more places to grab a few Zzz’s if you’ve had a late night the night before. In Houston, there’s a lovely gentleman named Mike (I believe that’s his name) in the main terminal club East, who makes the best Bloody Mary’s I’ve ever had in my life. Finally, don’t forget about the club in Vegas – it’s a bit far from the CO gates, but it’s better than sitting in the food court and watching tons of overweight tourists eat fast food.

@craig42k wants to know how I best manage my time to successfully achieve my health, personal, and business goals. For that, I point you to this blog post I wrote a few months ago.

@divathatateny wants ideas to promote her upcoming cookbook + CD called “No Singing at the Dinner Table,” by Singing Chef Jackie Gordon. Well – I didn’t know that singing chefs existed. Coming from a family of musicians, and being a vocalist as well, I recommend perhaps a video contest asking people to come up with their own songs praising dinner. The winner gets cooked meal for them and 10 of their friends, courtesy of your chef?

@mikepetrucci wants to know the last time I doodled or sketched something. Here you go, Mike, compliments of Finger Painting HD on my iPad 2. 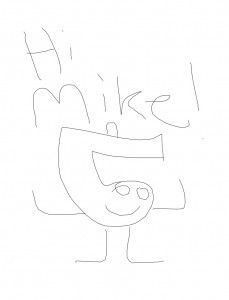 @boathousebilly wants to know how to increase exposure and membership numbers for his university rowing club in prep for 2012. Two things come to mind – One – Carry an oar with you all summer. Seriously. People like to know why people are doing things out of the ordinary. Tell them you’re recruiting rowers. It’s a great way for people to get into the conversation. Secondly – Let people know how good rowing is for your looks. Have you ever seen a fat rower? Best arms, back, and shoulder muscles of anyone! Play to people’s egos!

@thecleversheep is looking for a sponsor for unplugd.ca – If you happen to fit their profile, I’d check them out, and @thecleversheep, I’d read this blog post first on how you should look for sponsors.

@whisperingsqurl wants to know if I have any advice for a first-time entrepreneur: Yes. Don’t waste time listening to the haters. If you have haters, it means you’re doing a great job. Acknowledge that you have them, then redouble your efforts to do an even better job. Haters hate because they can’t do what you’re doing themselves. That’s all.

@gfriese wants me to continue promoting health and fitness opportunities, especially for kids, at the YMCA. I’ve been a YMCA fan ever since I was seven and got my Tadpole badge for swimming there! The YMCA does amazing things for kids and adults all over this country. I’m a huge supporter, and you should be too!

@click4agoodtime wants his girlfriend to move to NYC. I know your girlfriend. Hey L – GET YOUR ASS TO NEW YORK CITY. NOW.

This was fun! Perhaps I’ll put out another call next week for my trip to Germany. I’ll let you know – If I do, I’ll make it a Google database, so it’s easier for me to answer. Thanks for playing!