Yet Again, the Simplest Things Win in Customer Service

I’ve said it before – We don’t currently live in a world that regularly expects excellent customer service. In fact, with each passing generation, the customer service bar is actually lowered a bit more. 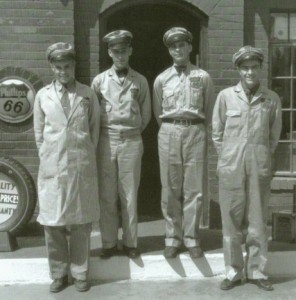 Example: In the 50s, you’d drive into a gas station, and four uniformed attendants would rush over, each handling a different chore, from checking your oil, to pumping your gas, to cleaning your windows, and other basic automobile tasks. It was simply what was done. Can you imagine that? Four guys, waiting for you to drive in, and actually running to service you? I was driving to Atlantic City last week to give a speech, and stopped in to get gas. Because New Jersey is one of the few states where it’s illegal for a driver to pump his own gas (anyone know the actual reason why? I don’t…) an attendant came over. While the gas was pumping, she actually squeegeed my front window clean, on her own, proactively! I was so shocked that I gave her a tip! I can’t remember that ever happening to me before. But in the 50s, it was standard. For countless reasons that are irrelevant to this story, standards have lowered. They’ve lowered by a lot. And with them, so have our expectations. Whether it be for a multimillion dollar corporate buy on which we sign off, or for a salad where all we ask is for the dressing to be on the side, our expectations have dropped along with the standards for customer service. The worst part, without question, is that they’ve dropped to levels well below “ok” or “fair” or “average.” Our typical expectation for a customer service transaction starts at “poor,” and if we’re lucky, ends at “fair.”

It’s simply what we’ve become as a society. And yet, wonderfully, that’s actually good news for all of us reading this post!

See, since we have such low expectations of customer service, (and I know I’ve said this before, but it’s worth repeating…) It’s so incredibly easy to blow each and every one of your customers’ minds, and shock them into 100% loyalty, every single time you’re given the chance! All you have to do is simply treat each customer one level above “crap.” Amazingly, you don’t even have to be anywhere near “great, “awesome,” or “outstanding” to be different than the norm.  To be thought of as “good,” we just need to treat our customers one level above the normal expectation of crap. That’s it. Anything we do that goes above and beyond “one level above crap,” is so rare, and so unexpected, that if you do that, you can rule the world.

With that said, imagine my surprise tonight when I got an email from John Korff, the President of Korff Enterprises, otherwise know as the guy who runs the company that puts on the wildly popular New York City Triathlon every summer. John’s been producing this race since the very beginning, well over ten years ago, when it was ever so small – Now, it’s one of the yearly crown jewels of the NYC sports world, right up there with the NYC Marathon, and as of this coming August, the NYC Ironman Triathlon.

At first, I assumed it was a form letter, since I’d been accepted into my 8th NYC Triathlon, coming up this July. (Why so many? Because I’m an idiot who never learns, but that’s not the point.)

I double-clicked to find an actual email, from John himself, congratulating me for getting in again this year, and thanking me for doing my eighth one!

I was still pretty sure it was a form letter – CRM software can easily know those things – But I still thought it was a nice touch. Either way, I happened to be sitting in front of my computer when it came in, so I dropped a reply back almost immediately to John, thanking him for the note, and letting him know that I was also doing the NYC Ironman the next month. Didn’t expect a reply, since I still kinda thought it was an auto-email.

Two minutes later – “Wow, Peter – Both! You know, we call those who do the NYC Triathlon then the Ironman the next month “Hudson Doublers!”

What made him email me? Was he looking for repeat “customers,” as it were? Those who’ve done his race more than once? If so, smart – Remember – it’s not cheap to race these races – Perhaps he realized that and wanted to let us know that our continued support of what he built hasn’t gone unnoticed. Perhaps he’s just that nice of a guy – Perhaps it was all planned out on a spreadsheet, and it was just my time to get that email?

It doesn’t matter. I’ve run a TON of races, all over the place, and this is the first time that any race director reached out to thank me, unprovoked, on his own. You can damn well bet I’m going to race his race every year, as long as my body will let me.

It’s those little things – What’s an email? It’s not a steak at an airport (not that there’s anything wrong with that, either) – But ironically, I think that’s the problem – That’s where the disconnect lies for the majority of businesses:

We’re tricked into believing that the best customer service can ONLY be achieved by these massive, over-the-top acts of grandeur – The airport steak – the “we’ll replace your car” – The types of customer service events that make the evening news and get blogged about.

I offer you this: (shrunk, for your Tweeting ease:) The best acts of customer service are the tiny things that reinforce the customer’s loyalty. They can be done daily, usually without any cost, and can foster customer retention, increase customer satisfaction, and yes, even grow your customer base by increasing word of mouth, through social media and other platforms. In other words: If you focus on the little things, your company will benefit, customers and clients will increase, and most importantly, REVENUE WILL RISE.

Don’t stop trying to create that one “massive” customer service story that goes viral and winds up on CNN. Never stop trying to do that, because you never know when it might happen. BUT – Spend more time focusing on the little things – The “thank you” when the customer walks in. The unexpected “we’re glad you’re still with us” email. The phone call to your favorite customer, letting them know that you were reading some article, and it told you to think of your favorite customer then call them to thank them for being just that. (I LOVE this one, I’ve recommended it countless times.)

An old friend and colleague who used to be a journalist once told me this story. His first editor gave him one piece of advice: “Be brilliant at the basics.” He was right. Let’s focus on the basics first. You’ll be surprised how much of your marketing and PR your customers will do FOR you, once you master the basics, and come out one step above the norm.

As always, I’d love your thoughts below in the comments. Thanks for reading! 🙂