Would You Lose a Customer over Seven Cents?

There’s a deli across from my office, on 6th Avenue between 29th Street and 30th Street. It’s one of five delis within a one block radius of my office, and it just happened to be the first one I bought from the day I moved in, and I stuck with it.

Today, I went in for a usual order: Roast beef,  American cheese, lettuce, tomato, mustard, on a roll. I grabbed a soda on my way to the counter. Opening my wallet, I realized that I hadn’t stopped by the bank recently. (I’m using cash less and less, anyway.)

Anyhow, the total was $10.07. I had two five dollar bills in my wallet. The woman behind the counter was the same woman I’d seen and paid for the past six months, give or take a few days. I looked at her and smiled, saying “can I owe you seven cents?”

She looked at me: “You don’t have seven cents?” “No, I don’t. Can I give it to you tomorrow? You know who I am, you see me in here every day that I’m in the office.”

She was actually arguing with a regular customer over seven cents. The very first time I’d ever not had the money to pay my bill. And it was SEVEN CENTS.

Fortunately, a woman behind me heard the conversation. “Here you go,” she smiled at me, offering me a nickel and two pennies. I thanked her, handing the seven cents to the cashier, with the snarky comment of “now you won’t have to close the store and go out of business, I’ve got your seven cents.” 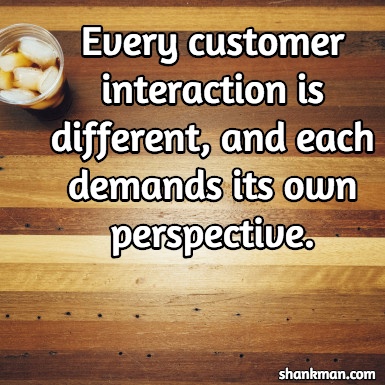 Look, I get it – The price is the price. But this was seven cents on an almost daily customer. Seven cents! Not eight dollars. Not free. Seven cents. On a loyal customer! It’s certainly the store’s right to make me pay the full price, I get that. But I also get the fact that I go there whenever I’m in the office, which is probably at least three days a week. So chances are, that’s what, $30 a week? $120 a month? $1440 a year? At least? And that’s just me! My whole office has been going there! That’s four people, and they’re in the office each day.

In the end, I think I’m going to try a new deli. And that’s a shame, because one employee killed my business with that store. It’s not a question of the seven cents, obviously, but rather, it’s a bad taste left in my mouth. I’m a friendly person. I like to smile. I like to engage in chit-chat. If I went back to that store, my friendliness would be gone, and replaced by the memory of the woman who didn’t have the foresight or goodwill to advance me less than a dime. And why should I want to deal with that every day?

Worst part? Had she been ok with the seven cents, I would have remembered, paid it back tomorrow, and from that moment on, been a Zombie Loyalist to that deli. Why? Because they helped me when I had a problem. Instead, they turned me away, and that’s going to cost them a lot more than seven cents.

The same is true in any business. There are rules, but there are times to bend them. When you stick to a rule and it causes you to lose more money than the rule would have earned, it’s a rule that can be bent. (Tweet this!)

The next time you have the ability to bend a rule for the greater good, I recommend doing it. And if you’re a boss, instill that into your employees – You’ll be amazed how rarely they’ll take advantage of it – You won’t lose money. Chances are, you’ll make even more money, and gain a few new customers.

PS: They forgot the mustard.