Back in 2000, I used the term “run” only in conjunction with “to the store for cigarettes.” I wasn’t a fat-ass by any means – I’d been super-heavy when I worked for AOL – I walked everywhere for the first 22 years of my life, then spent the next three driving from my apartment in Herndon, VA (land of NOTHING back in 1995 but a Taco Bell, a 7/11, and two brand new apartment complexes – one of which I shared a three bedroom apartment in) – to Vienna, VA, where I worked for AOL as one of their founding news editors. But when you grow up walking everywhere, you’re never truly fat – you’re “he could lose five pounds” to “I’m driving everywhere and eating Domino’s on a house account!” I came home and had fatter people orbiting me – it was scary. So I lost weight in 1997/98 – I spent a year smoking Marlboro lights, eating fat-free pretzel nuggets, and drinking Diet Pepsi to wash down my Ripped Fuel with Ephedra tablets. I don’t recommend it, but 70 pounds later, it worked.

Fast forward to 2000 – An employee of mine told me that running was “like walking, but faster.” She also mentioned that “thinner people get more dates.” So I started running. And that led to who I am now. I run a LOT – I run because I like the solitude – only time of the day (unless I’m skydiving) where I’m not with a blackberry or mobile phone. I run for the endorphins – Beats Adderal. And of course, I run, so that occasionally, I can have this. 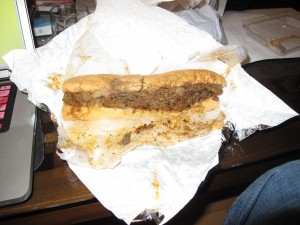 Sometimes, at the end of the day, you just want a double meat, double cheese, Widowmaker sandwich from Philly Slim’s. And when that craving hits, you have two choices: Deny, or indulge, knowing that you ran a 10k run at 7am yesterday morning by yourself, or you’re running a half-marathon this weekend, just so you can.

And it doesn’t affect your training, and it won’t raise your caloric count specifically because of that.

And that makes it ok.

And it makes the Widowmaker taste just that… much… better.