Not only did Facebook NOT overpay for WhatsApp, but they actually got it for a steal. Here’s why: 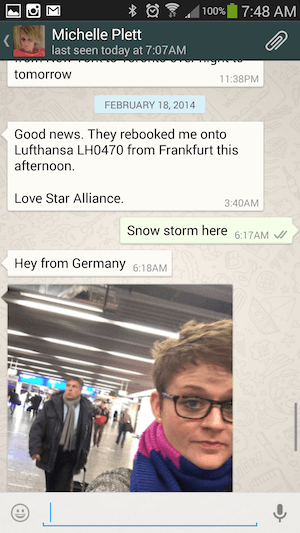 1) Facebook just totally broke the Big Telco’s hold on SMS. Let’s face it – If you’ve been introduced to WhatsApp, chances are, you use it. I use it exclusively as a replacement of SMS when I’m overseas – it’s FREE. Compared to $.55 per text on Verizon when I’m overseas, WhatsApp is a no brainer. For years, telcos have charged outrageous fees for text messages sent or received, when it costs the telcos virtually nothing. That’s about to change. When Facebook merges WhatsApp and it becomes their new messenger, it’s real-time delivery of messages, exactly like SMS. (Currently, Facebook emails aren’t considered “immediate,” and they sit in your box until you read them.) WhatsApp is as instantaneous as a text message. In fact, for lack of a better term, WhatsApp IS a text message. Why should I send a text anymore if WhatsApp does the same thing for free? I’ll take it a step further – On my Android phone, when I enter a new number into contacts, WhatsApp automatically sees if that person is using WhatsApp as well, and if so, adds them to my contacts. All I have to do is put the WhatsApp icon where my text message icon is, and I’m set.

2) Facebook just shot Google Hangouts in the face. I’ve actually been using Google Hangouts for both texting and their hangouts feature on my phone of late, because Hangouts lets me combine the two into one window. It makes it easier, and Google can archive any messaging which I can then search for via my email. With the WhatsApp purchase, Facebook can now do the exact same thing. While the purchase isn’t going to drive me to start using WhatsApp instead of Google Hangouts, it most certainly does prevent those who have never heard of Hangouts from possibly switching. Why should they use Hangouts if WhatsApp/Facebook does everything they need for them?

3) Finally, This is the mobile play that Wall Street has been begging Facebook for since they went public. The street has been screaming over and over that Facebook needs a mobile play – And not just advertisements. Now they’ve got one. You don’t use WhatsApp on your desktop. It’s strictly a mobile play. And as we move into a 99% mobile world, it simply works. As Facebook integrates WhatsApp into their ecosystem, the ads will flow, and WhatsApp will be the perfect delivery system.

It’s a great deal for Facebook, and $16b to disrupt the telcos, smack Google, and get a mobile base? That’s a deal anyone should take.

Thoughts? Let me hear them in the comments.