Why Being Told “No” is Actually the Greatest Motivator

Have you joined my incredibly non-annoying, once-in-a-while email newsletter?
Greetings from Dubai, on a gorgeous, sun-drenched day by the pool. (Don’t get all pissed off, by the time you read this, my ass will back in NYC cold.) This blog post will take a bit of reading, as there’s a backstory, but the lessons should be worth it. Keep reading. As is known the world over, Dubai is famous for excess. Everything here is in excess. The buildings have to be the tallest in the world. The cars have to be the most expensive. There’s even competition for who can have the license plate with the lowest number. 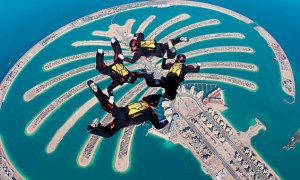 Nothing in this city of excess is immune from it, including the extreme sports community. Where most cities are lucky if they have one skydiving drop zone, Dubai has two. Skydive Dubai, and Skydive Dubai, Desert Campus. The former is the one that gets all the glory, as it’s right on the water, has the beauty of the Dubai skyline behind it, and if you’ve ever visited and done a tandem jump, this drop zone is where you’ve done it. Skydive Dubai Desert Campus is kind of like the awesome little brother who has been cursed with the even more  awesome older brother. On its own, it’s a truly amazing drop zone. It’s in the middle of the desert, with tons of landing space, beautiful greenery, and two fast-as-hell planes to take you to jump altitude in a matter of minutes. It has super-nice people, and gorgeous, unobstructed 360-degree desert views. But put the two in comparison, and Desert Campus is unfortunately, the younger, slightly less awesome brother. Here’s where it gets interesting: Any licensed skydiver with the proper certification can show up at Desert Campus and make a jump, as I did yesterday. Until the winds kicked up and grounded me after one jump, I had an amazing time. As you can see below, the jump was killer, the skies perfect, and the air warm. Even the sand was the softest I’ve ever felt. Lovely, lovely jump.

First Visit to Skydive Dubai from Peter Shankman on Vimeo.

This morning, I went over to Skydive Dubai’s main drop zone, since it’s only about a mile or so from my hotel. I wanted to see it in person, even though I knew I wasn’t going to be able to jump, because the main campus has a 500 jump/D license restriction. (For reference, I have about 340 jumps and a “B” license.) This restriction is in place for a number of reasons, most notably that the drop zone is surrounded by water, and if you screw up your landing, you’re going in the drink. As I watched skydiver after skydiver swoop in, hit their marks with extreme accuracy, I could only imagine the views they’d seen on the way down – Palm Island, the amazing skyline, the ocean… And… And it killed me. Massive frustration set in, because I knew I couldn’t join them. I wasn’t allowed (yet.) I was told “no.” Ask the majority of entrepreneurs who’ve started something of value – Chances are, we’d all tell you that at some point, we start doing what we’re doing because someone told us we couldn’t.

“Keep off the grass? Let’s play soccer.” Tommy Five-Tone (Danny Aiello) Hudson Hawk
Here are some ways to gain strength from “No.” To use it to your advantage, to help you grow. 1) With the exception of sexual situations, “No” is NOTHING MORE than just a slight delay towards Yes. There’s always a yes available. ALWAYS. Your job isn’t to pout about the no, but figure out what you need to do to get to yes. 2) Rarely does “no” mean a flat out “no.” There’s almost always a reason (or multiple reasons) behind the “no” Your job is to figure out what they are, and then, methodically knock them down, one by one. Once all the reasons for no are eliminated, the no becomes a “yes.” 3) More often than not, the reason behind the no is not only fixable, but could have been eliminated long before you got to it. In the above example, I knew damn well about the 500 jump/D license minimum. Could I have gotten to 500 jumps? Of course I could have, but I chose to do other things. (Like start HARO.) And that’s fine. No one will say you were wrong for choosing the path you chose, but if you want something that doesn’t fit into that path, something needs to change. I started jumping with my friend Francesco back in 2005, we met in our ground school class. He’s now got over 2,000 jumps, and I’m at my piddly 340. We chose different paths. There’s nothing wrong with that, unless my “no” is a direct result of it. And in this case, it is, so it’s up to me to get that no to yes by making some changes. In this case, getting better at the sport and improving enough to get to my D license. Understanding the potential obstacles that will lead you to a “no” lets you overcome them so you get to a “yes,” instead. 4) You mad, bro? Build on that. Pissed off that you got a no? Embrace that anger. Use it as fuel. Let it light the way towards removing the “nos” and getting to the “yesses.” That anger has fueled more people to greatness, more companies to profitability, and more failures to successes than anything else except hard work. Embrace the anger, grow from it, and turn the nos into yesses. End result: A no, from time to time, is beneficial. It helps you grow. It makes your yesses more obtainable, and just that much more sweet. Did I miss any other ways to get from no to yes? Let’s hear it. Post in the comments below, and as always, thanks for reading. I’m off to work on my landing accuracy.