When You Should Bend The Rules (Or, how to blow a 7-year business relationship in a day)

In general, “the rules” fall into two categories. “For our safety,” or “for gain.” By “for gain,” I mean for a company’s gain – i.e., “We can’t give out more than one sample because we’ll lose money.” In general, the rules make sense. Except for the TSA. Their rules never make sense.

But – Part of succeeding in business has to involve knowing when the bend, or even break the rules. There will never be a rule that can be designed for every single situation without fail. Every situation is different, and anyone in charge of enforcing the rules needs to understand that. No business will thrive (or even survive) if they don’t know when to bend or break a rule.

With that said, allow me to introduce you to The Helena. A gorgeous “green” rental building on 57th Street, with beautiful unobstructed views of the Hudson River, sunset, and New Jersey, it’s a place I called home for seven years prior to buying my new apartment near Times Square a few months ago. As anyone who ever visited me knows, it’s by all accounts, a stunning building, if not a little far west.

I fell in love with the building, with the doormen and porters, with the garage attendants and the neighbors. Everything about the building was awesome, and I told anyone who would listen how great it was. I am personally responsible for bringing in at least six tenants over my time in the building.

When I bought my new apartment, I still had a few months left on my lease. I went to the management office to ask if I could be let out of my lease early, explaining that I was in one of the coveted two-bedroom apartments, that could be easily rented out, since every time my lease came up for renewal, I’d get a note from management asking if I was leaving, since they always have people ready to take a two-bedroom.

In no uncertain terms, I was told “no.” “Oh, those are really hard to rent,” said Jim Manning, the head of the leasing office. “Funny, I said – you always said you had people looking.” “Oh,” he said, “Well, that was before.” Before what, I don’t know, but whatever.

Here’s the funny part – Letting me out of my lease early is NOT the rule I’m talking about bending. I signed a lease, and I bought my new apartment knowing I still had a few months left. That’s fine – That’s my problem, not theirs.

At around the same time, one of my closest friends, Becca, came home to her place downtown after a business trip to find that a pipe had burst in a neighbors apartment, flooding her apartment, ruining most of her stuff, and making her place unlivable. Her landlord was unwilling to help her, and she needed a place to stay. I’ve known Becca forever, and immediately offered her my apartment for as long as she needed it, since I wasn’t living there anymore, but was still paying rent. She took me up on my offer, and paid me the same amount of rent she was paying in her old place each month. While I wasn’t breaking even, it was better than having to fork out the entire rent for an unused place, and I was able to help a friend. Win-win.

Management knew she was there, knew who she was, and had no problem with it whatsoever. Seemed to work out pretty well.

Fast forward to a month left on my lease. Becca tells me she wouldn’t mind taking the lease over from me when I leave. I figure this to be a win for The Helena – Becca’s already proven herself to be a trustworthy tenant, all that would be necessary would be to transfer the lease, or even have her fill out a new one for her. Everyone wins.

I mention this to the leasing office at the Helena, and they start the paperwork. Here’s where it gets insane: Her former landlord, who she’s suing because he failed to fix the apartment she was in, refuses to sign one piece of paper saying she lived there. Legally, he wasn’t even allowed to do that – if someone lived somewhere, that’s a fact. That you’re being sued by that tenant shouldn’t matter. But he didn’t. Becca had all the other paperwork done, has excellent credit, and explained to management why that piece of paper wasn’t turned in. I even called and let them know that I trusted her, that I’d been there for years without a problem, that she was there for several months without a problem.

The result from The Helena: “Sorry, the rules require us to have that document.”

So let’s understand: In an effort to follow the “rules,” The Helena did the following:

1) They lost a trusted tenant who already had a good history with the building.2) They angered one of their oldest tenants, who continues to have the ability to recommend that apartment building.3) They fostered bad-will (as opposed to goodwill) by adhering to a rule that didn’t benefit anyone.4) They did nothing to help an already damaged leasing office reputation. (See screenshot below)

So Becca’s credit was flawless. I vouched for her (as a seven-year tenant with no negative issues in seven years.) She had already become friends with the doormen and porters, and everyone knew her. She was an asset to the building. The Helena decided none of this mattered, because they “had to follow the rules.”

When to Bend the Rules

Bend the rules when the only benefit of following the rule is to say “I followed the rules.” As I said earlier, no rule can be right for every situation. In this case, there was no downside in bending that one rule. The Helena chose not to, and it cost them a ton more than they gained. Know the reasons why you’re following rules, and know when to bend them.

Bend the rules when you have the opportunity to foster goodwill, and even remove some negativity about your brand. Check out the two comments on FourSquare about The Helena (neither left by me:) 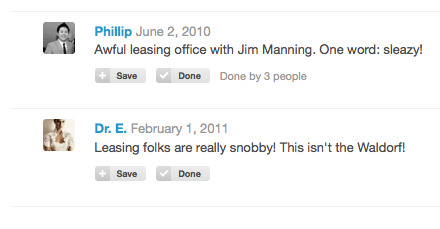 So they already had this against them. A simple act of goodwill, that wouldn’t have cost them anything could have gone far to void these comments. If you see “Wow, leasing office went out of their way to help me, can’t recommend them enough,” that would neutralize, if not invalidate the comments above. By not doing that, you’ve only reinforced the comments above.

Finally, bend the rules just to be a good human being. You’re the manager of the leasing office. One of the ways you become manager is by demonstrating you have the ability to think critically, not just to act like a robot. You’re in charge because you can make decisions that benefit the company, not just decisions that go “by the book.”

In the end, it comes down to common sense. Know when to be a machine, and know when to be a human being. Leaning one way or another can have ripples for years to come. In this case, the ripples are negative. I get asked by people all the time where to live in Manhattan. There are lots of luxury rental buildings I could recommend. Sadly, The Helena will no longer be one of them.