When the Problem is You…

For those who remember, in 2011, I embarked on a challenge. The goal was to get to 10% body fat in one year. I spent the entire year working out and watching what I ate. I also spent a ton of time bitching about it, but that’s to be expected. 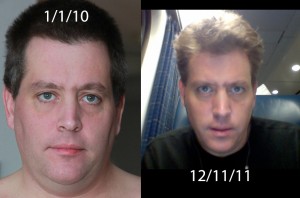 The end result was pretty awesome: I dropped a ton of weight, a ton of fat, added a ton of muscle, and in general, felt much, much better. Then, I got married, and 2012 started. With the challenge over, with no blog to update anymore, with no accountability in my life, the gym took a back seat to my business traveling, my work, my TV appearances, and the like. Eating healthy went from “eating healthy” to “trying to eat healthy,” to “trying not to eat like complete shit,” to “screw it, I’ll hit seamless.com.” I forgot everything I learned, I forgot how good it felt to be totally drained after a good workout, I forgot what it was like to beat new numbers, lift more than before, and I forgot the rewards that came living like that.

And guess what? I’m heavy again. And I’m really, really angry with myself.

I went with my dad this morning to a nutritionist, where I found out that I’d basically put back almost everything I lost last year. I know my fat to muscle ratio has changed significantly as well. I don’t even need the scale to tell me this, I know how my clothes feel.

I do know though that I’m miserable, I’m incredibly angry with myself, and probably most importantly, it’s entirely my fault. I have no one else to blame for this.

I guess that’s the point I’m at – When you realize that it is in fact yourself who did this to you, it makes it that much harder to swallow, but perhaps that’s where your “bottom” is. Once you realize that there’s no one else to blame, you know it’s your fault, and you know you have to make the hard choices to fix it. 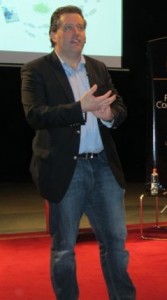 Well, I guess I’ve hit rock bottom here. Not in a “arrested while driving drunk and running into a building” bottom, but certainly something, in my mind, close to as bad. I’ve become, yet again, a slug, and I hate myself for it.

I think I needed to realize that it was entirely my fault before I was ready to do something about it. So now I am. I’ve let myself get to this place, and I know what it’s like to be here, for I’ve been here before. It’s a terrible place. I need to get out immediately, and I need to fix it. So I will. It’s time.

We make time for what’s important to us, and we don’t for what’s not. I learned that last year. If we want something bad enough, we find the time for it. “I have no time for the gym,” is bullshit. If we want it, we’ll make the time. See those people who, from 5am to 6am have the time to workout? It’s not that they like getting up at 4am, it’s that working out is important to them, so they make it a priority.

I guess it hasn’t been important enough to me for the last eleven months. And I have no one to blame for that but myself. Not my wife, not my assistant, not my cat. Just me.

Perhaps we all need to realize that the majority of shit we get ourselves into is in fact, our fault. Perhaps if we all manned up more, we’d be better off, instead of blaming everyone and everything else around us. I know it’s easier to do that, but then, you can’t start improving until you admit there’s a problem, and if you’re blaming everyone else for it, then you aren’t admitting that the problem is you.

The problem is me. I see that now.

It’s time to change that.