Was speaking at a conference the other day, and was prepping some notes a few minutes prior to my speech, when someone came up to me and introduced themselves.

And then she went and sat down, and I know she spent the entire speech thinking “I can’t believe I blew that.”

What’s the first thing you say to someone when you’re introduced? How do you say hi and not bore them? How do you do it without becoming a douche? Without making it all about you you you?

Have something to say! What’s your ten second intro? This isn’t a pitch. It’s not a life story, and it’s not a business plan. It’s a ten second intro. It gives me just enough information to want to follow up. You want to leave me wanting more. It’s our first date.

Here are a few things NOT to do. All of these have been done to me by people who have trapped me in a corner and forced themselves on me like “Gil” from The Simpsons.

1) Don’t launch into your business pitch right away, or in fact, at all, the first time we meet. If the conversation goes “Hi Peter, my name is so and so and i do this for a living and this is a company I started and I know it can be big and we’re six months old and right now we’re looking for funding and we’re trying to go to this stage and here’s why we’re better and this is the reason that we’re gonna…” Yeah – You so lost me at “I do this for a living,” it’s not even funny.

People don’t want to hear your life story (or corporate life story) the second they meet you. They want to know a little about you, and even that could be too much. Unless you’re meeting someone for an actual specified meeting where you have an hour, approach every new meeting as a Speed Date. 30 seconds, no more, don’t oversell, don’t overshare. If they like you, they’ll ask for more.

2) Don’t go deep. The first thing you say to me should never be anything deep. By “Deep,” I mean, don’t start debating anything massive with me, because chances are, I’m not going to be in the mindset to debate back. Rather, my eyes will probably glaze over, and I’ll start sending out ESP signals to anyone in earshot to help me escape. 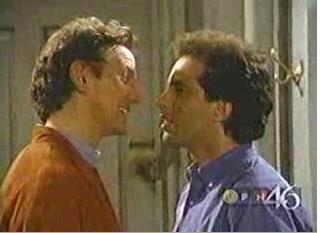 Don’t be a close talker.

3) Don’t be a close-talker. Seinfeld was right. Close-talkers are really, really weird. The only person I ever want to close-talk to is someone I’m sleeping with, and even then, not that often. Space, people. It’s real, and it’s a good thing. If this is the first time I’m meeting you, respect the distance. As long as we’re talking about “those” types of things, I recommend you also have Listerine strips with you, and also, don’t hold the initial handshake for longer than the “right” amount of time. Even one millisecond longer is creepy.

4) Lastly, don’t try and throw around names/places/people you know/cool things you’ve done into the conversation in the ten seconds you have. You know why? Because I don’t know you. If you start dropping names/places, I will always default to cynical, and assume you’re jut someone who drops names, but is of little value to me. Don’t be that person.

Practice! If you don’t think you can do it, work with a friend, a coach, a co-worker, or your best friend – the mirror. Never underestimate the power of talking to the mirror.

Smile. Never underestimate the value of a genuine smile.

Again – Smile. If you take anything away from this, make it that. A genuine smile can make up for a LOT.

Now go out and meet some people.

Did I miss anything to do or not to do? Let me hear it below.