What happens when you request customer service on a Saturday from the biggest company in the world?

Several weeks ago, I got an invitation to join Google Shopping Express, a new form of Google Shopping, designed, I assume, to compete directly with Amazon. You can order pretty much anything from almost any store, and they send it to you within hours via courier.

I gave it a shot, since a lot of what I buy now centers around my child. Not me. Heck, check out my buying patterns, and my electronics purchases have definitely taken a back seat to “Baby wipes.” I also have no room left in my apartment for anything I own, and am down to two shirts and one pair of jeans, but that’s not important right now.

So I logged on and ordered a bunch of stuff from Target and other stores. Diapers, baby wipes, toilet paper… The exciting life I lead, don’t you wish you were me. 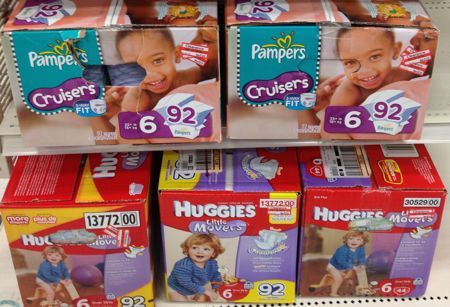 Anyhow, three hours later, a bunch of packages arrived for me, including the baby wipes, toilet paper, etc… And not one box of size 6 diapers, but six boxes of size 1 diapers.

How does one return something to Google? How does one even start? It’s awesome that you can order so many things with one click, but not so much when you have to return it. That poses a problem.

So I went onto the shopping site, and all I saw was an email address – shoppingexpress@google.com.

I should mention, it was Saturday. Even if they replied, they probably wouldn’t do it until Monday.  I sent an email, asking how I went about returning something, and then focused my attention on figuring out where in my small apartment I’d be able to put six boxes of diapers. Perhaps as furniture, replacing the living room chair?

About two minutes later, I got an email back – Automated, telling me to simply print out a shipping label from the link they were giving me, and box up the wrong packages, and take them to UPS.

Which, if I lived in the middle of Montana, would have been easy, because the diapers would have been shipped to me by UPS to begin with. But this was NYC, where they were dropped off by Messenger, not in boxes, but as six individual packs of diapers.

So now I’m wondering how to find a UPS store, realizing that I’m going to have to buy boxes… Essentially, this was now going to be the first four hours of my Monday, getting this stuff to UPS.

So just for kicks, I sent back a reply to the automated email, explaining my predicament. Then I went and called my building manager, asking if he had any extra boxes.

He also credited my account with the return, all before he even emailed me.

Think about it this way: Google emailed me personally.

It was like being emailed by God. Google emailed me personally and took care of my problem!

“Dear Peter:  We’re handling your issue. And also, you now have the ability to levitate your cat. Love, God.”

This was Google. This wasn’t the bodega next door. This was GOOGLE. It was SATURDAY. And yet Stuart was there emailing me, working, and handling my issue. Thirty minutes after he emailed me, the bad diapers were gone, replaced by the good diapers. I didn’t have to do a THING.

Again this was done by Google, the biggest company in the world. I can’t stress that enough.

The answer is simple: Customer service is important to them. Google Shopping Express put a premium on customer service, and it paid off.

Why can’t your company? Why can’t an airline? Why can’t Verizon? Why can’t Hertz? Can you imagine how much money I’m going to spend with Google Shopping Express between now and the time my daughter graduates High School? I think the scientific answer is “a crap-ton.”

They had a chance to cement a customer for life. And they did it.

Customer service needs to permeate everything you do in your company, in every single way, all the time. It’s what guarantees a return customer, who will also bring new customers with you each time.

I never thought I’d be thanking Google for amazing customer service. I can’t tell you how happy I am that I was wrong.