What A Boss Can Learn From a Bird (Alternate title: Goodbye, Meagan…)

Whenever I mention to someone that my assistant has been with me since 2008, I often get a surprised look. In today’s world, it’s rare for someone to have an assistant for more than a few years before they move on. Hiring someone in their mid-20s and having them seven years later isn’t common, I guess.

As most of you know, Meagan Walker has been my trusted right hand since August of 2008, and I’m sure I wouldn’t be anywhere near as successful as I am had she not been in my corner all this time, running my life from behind the scenes. She’s been my one professional constant, and I’ve been blessed to call her mine for as long as I have.

So it’s with no small amount of sadness that I announce that Meagan’s last day as my assistant will be Friday, May 1. It’s time for Meagan to move on, and take all the skills she’s learned while working for me, and use them to take the next professional step in her career.

But here’s the interesting thing – The relationship we’ve had, and the symbiotic way in which we’ve worked, made it really, really hard to tell Meagan that she could do better. And as a boss who cares about his employees, it was my responsibility to do just that when the time came.

I mean, come on – Who doesn’t want that perfect assistant, the one who not only knows all about my schedule, but can find anything you need in record time, knows what seats you love on every type of aircraft, and even knows your cat’s feeding schedule? 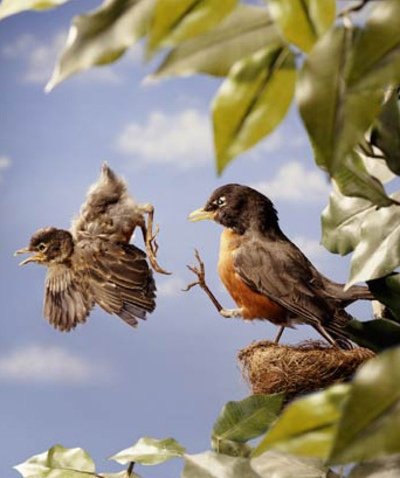 But that’s what separates a boss who cares about his or her employees from a boss who doesn’t. The mamma bird knows that the only way her babies will grow up to become fierce predator birds (or even just beautiful colorful adult birds,) is if she does the hardest thing she’ll ever have to do – convince her babies that they can fly on their own, the only way she can: She kicks them out of the nest, high above the ground, so that the babies have no choice but to fly.

Why do the mamma birds do this? Because they have much more confidence in their offspring than the offspring have in themselves, and they know when it’s time for their babies to literally spread their wings and fly.

It’s time for Meagan to spread her wings and fly, and achieve the greatness for which I know she’s destined, and no matter how hard the decision, and no matter how much I would have loved her to stay with me forever, if a boss really cares about his or her employees, he knows when to tell them that they can do better. And Meagan, I know you’re ready to do better than me, and I know you’re going to fly higher than you ever imagine you can.

Even though it’s 100% the right thing to do, “kicking Meagan out of the nest,” is a huge shock to my system, and unbelievably sad. BUT… I take great comfort in knowing that whenever the nest empties, a new bird comes in for a new landing.

I’m thrilled beyond words to introduce you to Adam Rei Siegel, who joined me earlier this week, and will be handling my life, including my schedule, travel, TV appearances, and the like. As a bonus, Adam comes from a talent agency background, so he’ll also be spending the majority of his time helping to book me new speaking engagements all around the world. You can reach him at adam at shankman dot com. 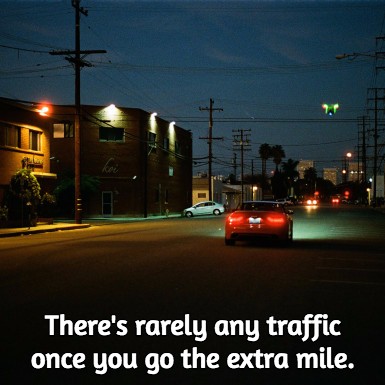 As an aside, an interesting story about how I found Adam – I always preach that all you need to do to win is be just one or two levels above what we expect, which is usually crap. Well, I met Adam at a speaking gig I had on the West Coast a few years ago, when he was still in college. He took the time to mail me a hand-written note, thanking me for talking with him after my speech. Several months later, when he was in NYC, he emailed and asked if he could pick my brain, and remembering his note, I said yes. During our talk, he mentioned wanting to move to NYC after he graduated, and I told him to expect to be eating a lot of Ramen during his first few years here, as I did when I was starting out. We laughed about that, and the meeting ended.

A few days later, I walked into my office to find a thank you note and a case of Ramen noodles on my desk, from Adam. That stuck with me. When Meagan and I decided it was time, Adam was my first call, and I’m thrilled that he accepted.

Just be 1% better than everyone else, my friends. It’s amazing what that’ll do for you. (Tweet this!)

So – Meagan – Know that you’ll always have a home with me, forever and ever, and Adam, welcome to the insanity. Working for a creative, ADHD, mile-a-minute born-and-raised New York City boy won’t be easy, but hopefully what you’ll learn and how you’ll grow will make it more than worth it.

And, as always, to you, my readers, my humble thanks. None of this and I truly mean none of this, would be possible without you.

So to great things for all of us, I remain,

PS: I know that so many of you have had contact with Meagan over the years – please feel free to congratulate her below in the comments, and her email will stay live for as long as she wants.  And also, of course, please welcome Adam! I’m so excited to have him on board!