Using Your Fear to Create Awesomeness

I like to think I know a little something about using your fear to create awesomeness. 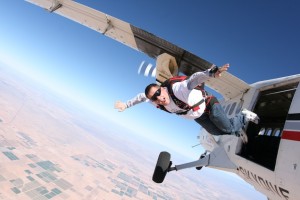 Fear is designed to create awesomeness

Back in the times of the caveman, fear was the one instinct that kept our species moving forward. When you were hungry, you had to kill something to eat. You didn’t have a choice. You went out and tried to kill dinner. If you didn’t, you’d starve.

Of course you were scared. Saber-toothed tigers and giant wooly mammoths weren’t really looked upon as “friendly,” but you didn’t have a choice. So you went out and attacked. And if you were victorious, you got a kick-ass meal. If you weren’t, well, it didn’t matter. We used our fear to push us forward – to allow us to survive. And the chemical responses to fear – dopamine, adrenalin, they are just as strong now as they were then. In essence, fear gets us high. That “high” kept us alive, and helped push the species forward. You think it’s a coincidence that when we’re walking down a dark alley, our brains automatically dilate our pupils so we can see better? It’s built in. Back in the day, fear was considered a good thing.

Examples of this abound – We take “safe jobs for the paycheck,” instead of striking out on our own. We quash our big ideas because we’re afraid they might fail. And probably more than ever before, we don’t follow our dreams because we’re “afraid what others might say.”

Sadly, we’ve become a society that’s crippled by the thought that someone, somewhere, (usually of much lesser mind) will call us out on what a bad idea we have, before we ever get the chance to prove it. As such, most of our great ideas die while still embryonic in our brains, killed by fear. The next airplane, the next space vehicle, the next life-saving device, or even the next brilliant marketing idea, all murdered by an unjust fear.

I came up with a name for this syndrome a few days ago, after reading an oddly vitriolic rant against me by a PR guy named Richard Laermer. He’d written a scathing piece against a new idea I’d come up with, an idea which had already been embraced by several high-profile, multi-million dollar companies around the globe. Because the idea was announced and hadn’t been implemented yet, he chose fear, sprinkled with inaccurate facts and slipshod reporting.

I call it “Getting Laermered.” (Rhymes with “hammered.”) Imagine coming up with a new great idea, and little ankle-biter mosquitos buzz all around you, shouting “this is bad. You’re stupid.” They’re nothing more than an annoyance, but an annoyance is still annoying. You’ve gotten Laermered.

With your permission, I’d like to offer some suggestions on how to get over the fear of getting Laermered.

Don’t ignore the fear. When you get that queasy feeling in the pit of your stomach, listen to it. It’s there for a reason. It’s telling you that you’re on the edge of something great, and you need to make sure all your ducks are in a row. You need to listen to your fear when you try something new. It’s not telling you not to do something, rather, it’s telling you to push forward, carefully, and without reckless abandon. Fear tells us to be aware, alert, and more cunning than our opponent. Embrace your fear, absorb its strength, and be stronger from it. Ignoring your fear is like being starving, and not eating the nutrient-rich meal placed in front of you. Eat your fear. It tastes good, and will make you stronger.

“Great spirits have always encountered violent opposition from mediocre minds.” -Albert Einstein. I can’t even begin to list how many times this rule has played out in my life, and in the world. “You’re starting a company and naming it The Geek Factory? What’s wrong with you? “You’re taking on PR Newswire with something called HARO? You must be insane!” “You’re jumping out of a perfectly good airplane? Why would you do that?” “You’re training for an Ironman? What the hell is wrong with you?“

Remember – We no longer live in prehistoric times, and the general consensus has become “play it safe.” This isn’t necessarily always good. When people don’t have the need to change, they usually don’t. It’s not until a fire is lit under most people’s butts that they ever consider abandoning their comfort zone. Want an example? When do you look hardest for a new job? When you’re unhappy with your current one, but still making a kick-ass salary, or when you’ve just been laid off, and you only have six months of savings?

If you want to achieve greatness, you can’t spend your whole life playing it safe. You need to take calculated risks, knowing that you might fail, but remembering that the upside to the possibility of failing is the possibility of succeeding beyond your wildest dreams. If the the options are risking getting Laermered, or not trying at all, I’ll take the risk of getting Laermered every single time.

If playing it safe works for you, if the steady paycheck and the cubicle suits your lifestyle, by all means, do it – I’d never have the temerity to tell you not to, as long as you’re happy. But if it doesn’t, if you believe you’re destined for more, then I can’t imagine anything sadder than not pursuing your dreams because of a fear of being ridiculed by a whiner.

If you don’t first believe in yourself, don’t expect anyone else to believe in you, either. “As a composer, he is hopeless.” – A music teacher referring to Beethoven. After being cut from the Basketball team in high school, Michael Jordan locked himself in the locker room and cried. Winston Churchill failed the sixth grade. It goes on and on and on. The only voice you have to listen to without fail is the one inside. That voice silences doubt, it mutes the opposition, and it forces you to stand up and take action on your ideas. But only if you listen to it. All the examples above got Laermered, and they all rose way, way above it. You can too, but only if you listen to yourself first.

Pain is just weakness leaving the body. Jack Walston, a former Navy SEAL, and a man I’m proud to count as a friend, said that to me. It’s a quote from the Navy SEALs, and it’s so very true. A secret benefit to getting Laermered is the strength you can draw from it when it happens. Keep in mind, I’m not saying you should ignore everyone who offers advice. Some of that advice, that which comes from a trusted mentor, for example, is invaluable. But when it comes from someone who wants to keep you down for no reason, it’s up to you to draw strength from it. The intrinsic value you can gain from getting Laermered is worth a million times more than the person who Laermered you. But you need to be willing to draw out the value, and ignore the banal. Nothing pisses off a whiner more than finding out that you turned around the whine and became stronger from it.

Living a public life is more dangerous than staying private, but much, much more rewarding. I’ve always lived my life in public, to an extent. I talk about my ideas, I mention them for the world to see, because the reaction drives me. Good or bad, the reactions you get from announcing an idea can push you to a higher level of greatness. As much as it pains me to reference any Tom Cruise movie, the fact is, Jerry McGuire didn’t achieve greatness until he announced that he had a better way of doing things. And the people who initially took great joy in mocking him? They wound up as roadkill. Great ideas always tend to prove the Tortoise and the Hare theory. In the beginning, the whiners are riding past you, shouting their insults. In the end? It’s your Maserati leaving them sucking wind on the side of the road.

Finally, If you weren’t doing something that could shake things up to begin with, you’d never be getting Laermered in the first place. Remember – thanks to the complacency we’ve created as a society, we’ve become ok with complacency. People fear change. That is wrong. Complacency leads to stagnation, which leads to failure. You must always keep moving forward. Use getting Laermered as a barometer. If you’re not getting Laermered every once in a while, perhaps you’re not reaching your full potential.

We’re approaching 2011. A new year, full of new possibilities, and 365 days of opportunities to be awesome. Don’t let the fear of something as inconsequential as getting Laermered prevent you from achieving your own greatness.