The &quot;Right Stuff&quot; Apparently Starts in Your Inner Ear

That’s not to say that my trip on G-Force One wasn’t entirely worth it. Because it was. Even just to see the joy in my dad’s eyes as he got to fly around the plane like a 67-year-old Superman made all my nausea and sweating completely worth it. And hey, out of 29 people, 11 of them puked, and I wasn’t in that group. So you know, you find good things wherever they come from.

I’d heard about the Zero-G flights for years. Run by Space Adventures, the same company that takes normal every day people to the International Space Station, these guys put you in a modified 727, and blast you into the sky to experience weightlessness. The same thing, they say, as what real astronauts feel in space.

I, of course, am a social media guru, a PR talent, and a pretty good public speaker. All of which are great things to be, but all of which do not, however, come up on NASA’s “this is what you need to be an astronaut” list.

Not having “the right stuff” for anything, of course, has never stopped me from specifically doing anything, as you well know.

With that, I told my dad upwards of two years ago or so that at some point, I’d like to take him on the Zero-G flight as a birthday gift.

Fast forward to a few months ago, where I met, through HARO, Tom Dietz, the head of PR for Zero Gravity Corporation and Space Adventures. A few conversations later, and me and Dad were signed up for the March 21st flight out of (and back into) Las Vegas International.

Arriving on scene, we met all the players – Tom was there, as was Peter Diamandis, the founder of Space Adventures, as well as the X-Prize. And guess what – He’s from The Bronx. NYC Represent. AGAIN.

But first, we spent a half an hour putting on our flightsuits and taking pictures, and eating our “low protein/low dairy breakfast,” (perfect for not throwing it up) we sat down and Peter welcomed us, and introduced us to what we were going to experience. I’ve never heard the words “life-changing” and “like nothing else ever” used so many times in one speech. In a lot of ways, though, he was right.

After a half-hour training video, we were ready to go. Now it was time to get screened by the TSA and head to the buses to take us to the airfield. Yes, we had to get wanded by the TSA. No, they wouldn’t let us take photos. Apparently, whether you’re in an airport or a private facility, the TSA’s rule of “Vhere ah your papers?” still applies.

All suited up and ready to go… 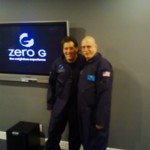 Finally, we boarded the bus for the short drive to the airport.

We get to McCarran Airfield (let me tell you, driving right to your plane beats being called by row number EVERY. SINGLE. TIME.) and we walked up to the plane to pose for photos, primp, take our own pictures, and generally marvel at the giant machine that was about to take us weightless.

Me and Dad outside the Plane

What always amazes me is how quickly one is willing to forget that they look like a complete dork when they’re doing something cool, and pose for as many photos as one can. Check out dad’s Top-Gun Sunglasses! Where the hell did he get those?!

Me and the big plane

Dad and the Big Plane

Sitting on the plane, waiting to take off, I reflect on what I’m about to do, and trust in Peter Diamandis’ words that “very few people experience any sort of nausea at all.”

The inside of the plane: 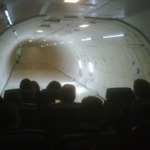 And then we take off.

We get to altitude really quick, and we’re instructed to put on the socks that will designate what team we’re in – the foam-covered part of the plane is divided into three segments, each with a color, that shows what group you’re in. We were in the blue team.

And then it’s time to move to the padded floor and wait for the first Parabola.

It comes. I had my camera trained on my dad to watch. Sure enough, he goes weightless! (as did I, I forgot to realize before I noticed my inability to continue sitting on the floor.)

I guess the best way to describe weightlessness is the feeling of being on an elevator that stops at the top floor after going very, very fast, then multiply that by a few thousand. That same “pit of your stomach feeling” that says “Wheee!” is there, but multiplied by a lot.

At least, that was my feeling for the first four or five Parabolas.

A few really interesting things to notice in this video:

2) Notice that by the time the weightlessness is over, one major thing has changed about me – I’m not talking all the time. That’s because I started getting nauseous. Apparently, the universal key to get me to shut up is simply to get me nauseous. By the time we came out of that parabola, and that was probably the fourth or fifth, I was light-headed. I never felt like I was going to puke, but definitely sweating a bit, and each subsequent G-force then weightless moment added to the nausea. But it was ok – It was still awesome. But yeah – Turns out that nausea will shut an ADHD person right the hell down faster than a kill-switch. Interesting. Perhaps there’s research to be done here.

By this time, we’re well into our 11th, 12th, even 13th parabola. Despite the nausea, I managed to do as directed in some of the weightless moments, and try and catch M+M’s in my mouth (I couldn’t) and swallow balls of weightless water (I couldn’t, but I managed to get soaked.) (I was reminded of Homer Simpson in space with the Potato Chips “Homer no! They’re ruffled!”)

Finally, I got some great video of Dad just having a blast – until gravity returned and he landed on me. Watch the camera go dark.

So not only does he have MUCH better tolerance against nausea than I do, he also body-checked me.

Which brings up an interesting point. When the parabola is over and gravity returns, they shout “FEET DOWN, COMING OUT!” which is your indication to get your feet pointing towards the floor, since you’re gonna be on it very shortly.

Problem is, ZERO-G’s timing wasn’t always on target… Sometimes they gave you three seconds to get on the ground, other times they shouted “FEET DOWN” a few seconds after you hit the ground. That’s kind of like hitting your friend with a water balloon, and as he’s standing there dripping wet, shouting “Heads up!”

Finally, we finish all 15 parabolas, and we’re congratulated by everyone for surviving. Peter came over and shook my hand, which was really cool.

That’s when I notice that there’s suddenly a lot more room in the cabin now then there was in the beginning. I look back towards the seats in the back and realize why – 11 members of our team weren’t so lucky to just get nauseous. I see a lot of them leaning on the seats in front of them, and the tell-tale small, white, paper-lined-with-plastic bags either at their feet, or still gripped in their hands.

A little under a third of our crew couldn’t handle weightlessness, and lost whatever they’d eaten over the past day or so. All of a sudden, my little bout of nausea didn’t matter so much to me.

Getting back to our seats, we survived the 25 minute flight back to McCarran mostly by breathing through our mouths as the smell of those who didn’t do so well started permeating the plane. Finally, the Ka-Thump! of the wheels touching down said we actually did it. We threw our shoes back on and ran down the back stairs. I wasn’t alone when I exited the plane and just started gulping down as much fresh air and cold water as I could handle. I think I was very much in the majority.

But in the end? I did it! I survived, and more important, Dad and I had a truly awesome bonding experience. Thanks to Tom, Peter, and the rest of the gang for an unbelievable experience. Will I do it again? Probably not. But I’ll gladly tell anyone who will listen that they should try it at least once.