You’re not important enough to let an unknown number go to voicemail.

No matter how much the phone might annoy me, if it rings, I’ll answer it.

Seems that the whole world is bashing on phone calls of late, and I’m no exception. If I can avoid speaking on the phone, I will. I think it has something to do with having to give up one of my hands to hold the phone. As someone who’s ADHD, that’s difficult to do. If I can text, WhatsApp, WeChat, or Google Hangout, I’d much, much prefer that.

Back in 1997, a small, unknown company named Huawei called each of the top 10 consulting firms, asking for help. They had some money to spend, and they were willing to spend it. They called all ten of the top ten consulting firms in the US and Europe, asking each of them to take their money.

One firm did, however. One consulting firm called Huawei back, and took the first meeting. That first meeting led to a relationship that’s still going strong to this day.

By simply answering the phone, and returning Huawei’s call, IBM has been paid over $500,000,000 for consulting work from Huawei, and that was just in the first ten years, from 1997 to 2007. Imagine how much more they’ve made over the last nine?

Huawei, by the way, is now the third largest mobile phone maker in all the world, after Apple and Samsung, and is China’s largest privately held company.

My financial advisor, Ken Helman, has been my financial advisor since 1998. When I first reached out to financial advisors back when I was just starting my career, I called two of them. Ken was one, and someone a friend of the family recommended was the other. Not only did Ken call me back within ten minutes of my speaking to his assistant, but to this day, he’s always had time for me, whether I’ve had a stupid question, or a complex problem. He’s rarely had to call me back, since he also answers his own phone, and although I’m surely not his richest client by a long shot, he’s always made me feel like I am. The one the family friend recommended? He called me a week later. No thanks. 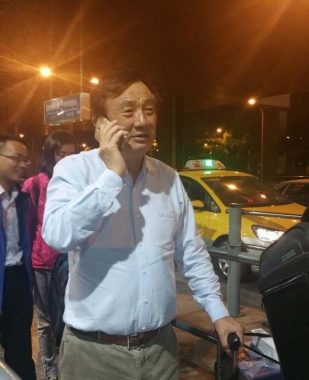 If you’re really so important that you can’t find five seconds to take a call, even if it’s just to say “thanks, why don’t you email me,” then you’re probably not reading this anyway, as you’re way too busy to read  little blog like mine, right?

Take. The call. I’ve landed countless keynote gigs over other potential speakers simply by answering my own phone when it rings. I put my number on my website, I say it in all my keynotes. Occasionally, someone calls me, and when I answer, they’re shocked to the point where they have to remember why they called – They simply don’t expect to get me on the phone. Do I get the occasional wrong number, or someone trying to sell me something? Very rarely. It’s well worth the tradeoff.

Imagine it: We live in a world where when we make a phone call, we DON’T EXPECT GET THROUGH TO THE PERSON WE’RE CALLING! How easy does that make it for you? I mean, come on! Sure, I prefer text and email. But you know what? It’s not my call. If someone wants to hire me, and they want to talk to me on the phone, I’d be an idiot not to.

Several years ago, a photograph surfaced of the founder of Huawei, Mr. Ren, (who became a billionaire from the company he founded, by the way,) waiting for a cab in a taxi line at the airport in Shenzhen, China, with hundreds of other people. A billionaire, waiting for a taxi with the rest of the world.

I bet Mr. Ren answers his own phone. It’s a good thing for IBM that they chose to that day, too.