Like everyone else, I was glued to Twitter Sunday night, watching the news of the death of America’s #1 outlaw. I took away a few points from the entire event, and want to see if I can apply them to our social media and marketing lives below.

1) Get your facts straight before you report. Before POTUS actually came out, one major network was busy saying “This is about Libya. Qaddafi is dead,” over and over. When they found out it was about OBL, they started changing their tune, while the text on the bottom of the screen still talked about Libya. They looked foolish. When your company has a crisis, one voice rules the day. Make sure you know all your facts before you start broadcasting. 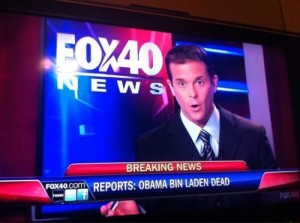 2) Being under a time crunch isn’t an excuse for misspellings or grammatical errors. Obama Bin Laden is dead? Yeah, enough said. Be smarter than that. Before you post, whether it’s a tweet, blog, Facebook post, or even bottom-of-screen, take a deep breath, and read the post BACKWARDS. By reading it backwards, your brain is forced to notice the words, as opposed to sentences. Misspelled words tend to get corrected much more often when read this way.

3) Speed still equals life. Fact is, the networks dropped the ball again, much like they did with Michael Jackson’s death. By the time all four nets got around to reporting it, the social net knew what was going on. Granted, the social net got the majority of first-responder information from CBS News Capitol Hill Producer, Jill Jackson, but it was a tweet – not a post from CBS News. Essentially, Jill trumped her own network. (I’m sure her bosses are thrilled with her today…) But the bigger issue is this: In the age of insta-posting, we need to be quiet until we’re ready to go. Assume that the second you tell one person, the whole world knows. If you’re about to break news about your company, the less people who know before you do, the better, end of story. If you happen to be dating a CBS News Producer, you also might want to make sure you don’t talk in your sleep, as well.

4) Timing matters. When the White House told all the pool journalists to return to the White House, the secret was still pretty safe. At 10:30pm, when POTUS was scheduled to go on, only a few people knew – The story broke at 10:32pm EST from aforementioned CBS News Producer. Had Obama taken the podium when he SAID he was going to, he could have beaten her and broken the news to millions more who wouldn’t have heard it yet. Lesson? Give yourself one more (or more) time than you actually need. Had he told the journalists to report an hour later, he might have beaten it when he took the podium at 11:30pm.

5) You never know who might be talking about you – Regardless of whether they know it, either! Meet Sohaib Athar, a computer geek who just happened to be living next door to Osama Bin Laden and tweeted out about some gunfire he happened to hear from his home. Oops. While we didn’t know who he was talking about, it was only a matter of time. How could this affect your company? Simply put, remember this: Someone is ALWAYS watching.