“When did you become so paranoid?” “When they started chasing me.”

Ask any company who hasn’t yet dipped their toe into the social media ocean, and you’ll find that chances are, it’s not that they don’t believe in it, but rather, they’re afraid of “losing control of the message,” or “not being able to manage our brand online.”

In other words, they’re paranoid.

1) “We’ll lose control of our message if we go online!” 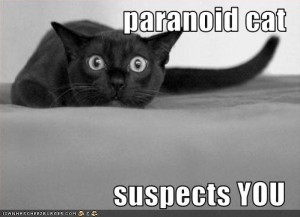 HOW TO HANDLE: Set the paranoid boss up on Tweetdeck, and close the “post” window. Let them watch search windows of their brand name and competitor’s brand names for a week to get an idea of how it works. Then work with them to start responding. Baby steps.

It amazes me that people still say this, but they do. Fact is, the fastest growing segment of Facebook is moms, 55-59, and the median age on Twitter is 39.5. It’s not 3lit3 d00ds using this stuff. And yes, I know you know that, but we’re talking about your paranoid boss.

HOW TO HANDLE: Set the boss up on Facebook or Twitter, and upload his address book. When he sees that all the guys he plays golf with at the club are already online, he’ll change his tune.

No it’s not. There are way too many idiots running around calling themselves gurus and experts. That right there is a sign to run away from them. But, there are people out there who know what they’re doing. Scott Stratten. Chris Brogan. Steve Crescenzo. Me. And we’re all going to tell you the same thing: You don’t need to spend a ton of money on this stuff. You don’t even need to hire us if you don’t want to. Simply start with the basics and go from there. The usual suspects are all free. Show the paranoid boss that you can tie free tools into GENERATING REVENUE, and you’ll get a budget with which to do more. Simple.

HOW TO HANDLE: Use the free tools at your disposal before you hire an expert or contract an agency. Give yourself a timeline, and tie it back to REAL REVENUE. Be diligent.

4) It takes too much time

No it doesn’t. You don’t need to hire a full-time social media employee, at least not right away. What I do with my Blackberry, my Mac, and my a wifi connection can be done by anyone in your office, and it shouldn’t take more than 20 minutes over the course of the entire day. It’s listening first, listening second, and responding third. That’s it.

HOW TO HANDLE: Find the one person in the office who likes this stuff already, and work with them on ways to handle it. Read the multitude of blog posts on what tech is out there to help you accomplish what you need to the best.

No it isn’t. You know this. Now you need to show the boss that it’s not about your website alone. Sure, your website should be the cornerstone of your online presence. But to show that website, you need to find out where people are, and point them to it. And guess what – They’re not on your website! They’re on the usual suspects, going about their day, waiting to be marketed to in an appropriate way.

HOW TO HANDLE: Find a few ways to prove that a website alone isn’t enough. Compare the number of visitors on your site in a month with the number of fans a competitor has – Explain that social media is so much more than a website, yet done well, costs so much less. Show the boss that more people who will buy from you use the various social media outlets millions of times a day, and that those outlets are the biggest drivers of traffic to business websites out there – Even bigger than Google.

You can turn the paranoid boss into an ally by showing him that he’s worried about primarily nothing – it’s good to have a healthy dose of fear – but paranoia gets annoying really fast, and won’t help sales.

Any other ideas? I want to hear them below.