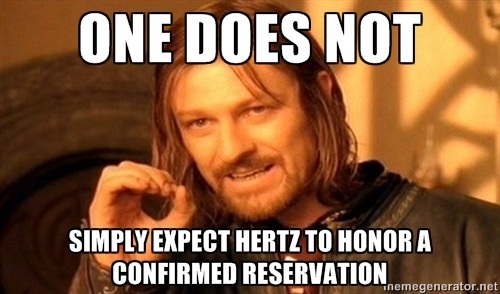 I had no plans to write a customer service story today.

Flying into Phoenix Sky Harbor Airport on Tuesday morning, I landed to another beautiful day in the desert. Sunshine, temps already in the high 80s, I was my usual happy self. I love to fly, I love to travel, and consider myself incredibly fortunate that I get to do it for a living, via hundreds of business trips every year.

For those who have ever traveled with me, you know I’m exceptionally easy-going. Flight delays? Hey, it happens. Hotel room not ready? No worries, I’ll sit in the lounge and answer emails. It takes an unbelievable level of incompetence to rile me up to a level of anger. I think that’s because I don’t get really upset unless it’s hands down, pure incompetence. Weather? Traffic? Not really much you can do. But pure incompetence and lack of caring? That’s another issue entirely.

When I arrived at Hertz, my name wasn’t on the “Gold Member” board as it should have been. That’s the best part of being loyal to one company, as I can bypass the counter and just go right to my car. When there’s no name on the board, you have to go to the counter. So I did.

And I found myself amongst 40 other people, all without their names on the board, too. And helping all of us? 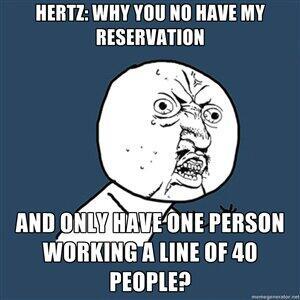 After about twenty minutes of waiting, we were told we could continue to wait, or go upstairs to the main counter, which would have more employees working. A few of us did. While I was waiting on a new line upstairs, I created the meme you see to your left. Never underestimate the power of someone with a mobile device who’s in the process of being pissed off by your business.​

At the same time, I had texted my assistant Meagan, who immediately got on the phone to Hertz to try and figure out what was going on. Her result? “The phone kept ringing and ringing, going to voicemail.” (Seriously, Hertz? The Phoenix Airport location lets their calls go to voicemail?)

After about 25 minutes in the regular line, two things happened at the same time:

1) I was finally called to the counter.
2) A floating Hertz Employee shouted to the line that there was now a “one-to-two hour delay on getting cars.”

This didn’t bode well, but the counter employee had an awesome chance to save a customer in real time. I told him I was a gold member, and my name wasn’t on the board, but I had a confirmed reservation.

Did the Hertz counter employee step up and take that opportunity?

Sadly, he did not. He did the exact opposite of stepping up. His response was so bad, it could have almost been comical.

“Sir, if you’re a gold member, you need to go downstairs to get your car from them.” (“Them,” as if gold members were handled by a different company.)

“But they told us to come up here.”

“You need to go down and talk to them.”

“But there’s a huge line, so they told us to come up here, and I’ve just spent thirty minutes on this line. You don’t have the same computer system? You can’t simply look me up and find my confirmed reservation?”

“No, and there will be a two hour delay for your car anyway.”

“So I want to make sure I have this right: After 25 minutes downstairs, then being told to come upstairs, then waiting 30 minutes on this line, I finally get to you, and you have the power to look up my reservation, but instead, you’re refusing to help me because this is the “non-gold” line, and I’m a gold member?”

The best part? He actually had the balls to then look past me and shout “next on line” to the next person on line.

I was floored. I don’t EVER recall having this bad service from any business, let alone a business where I’m a repeat visitor. I was reminded of the rental car customer service scene in Seinfeld, except mine wasn’t a sitcom, it was actually happening.

Let me quickly offer a list of five things I’d rather do instead of renting from Hertz the next time I find myself in need of a rental car:

Fortunately for me, and very unfortunately for Hertz, Phoenix Sky Harbor Airport has all of their rental agencies in one building. Which meant that it took absolutely nothing at all for me to walk 35 feet from the cataclysmic nightmare that was Hertz, and find myself in the Zen garden of tranquility that was Avis Rent-a-Car.

I’m not exaggerating when I say that within five minutes, Barb at the Avis counter had me:

Of course, when I got to my hotel, I got a tweet back from Hertz asking for my confirmation number so they could “look into the problem.” But by that time, I’d already canceled my reservation, and Avis had cemented me as a customer.

I even got a follow-up email from someone at Hertz Corporate the next morning. It was very nice, but the damage was too far done. The issue isn’t what happened to me – Perhaps they were busy, perhaps they had a random overflow of people. The issue was how it was handled. Or in this case, how it wasn’t handled.

See, every single time a business interacts with a customer, that business can either reinforce their relationship with the customer, or they can end it.

The person at the counter at Hertz chose to end it.

So we close our tale with one simple question:

The next time you interact with a customer, what will you choose to do?