Peloton Tread Review: I’m Sweaty and Out of Breath, and This Treadmill is Amazing.

I’m the first to admit it: I’m “that guy” when it comes to the Peloton Bike. (See my original bike review here.) If you’re meeting me for the first time, we’ll be talking about the bike within the first fifteen minutes. I’ll definitely be pulling out that special OnePeloton “Black Card” that they sent me at the end of last year, and more than likely, I’ll be inviting you to a spin class (on me) before we finish our first conversation.

BUT… When I heard Peloton was building a treadmill, I was a little scared. It’s one thing to be a fan of a company that makes one amazing product and has built one amazing audience around said product. It’s another thing entirely when that company starts to expand outside of their core. Even the name “Peloton” means a “group of cyclists.” So I was afraid. Visions of Starbucks “Joe Magazine” danced inside my head. I was starting to get scared – Would the Tread be the downfall of the Bike, and by extension, the company? Could they leap out of what they knew into uncharted waters?

I took my first class this morning on the Tread, three days into the studio’s “soft launch.”

OnePeloton has absolutely nothing to worry about. The Peloton Tread is incredible. The class was incredible. My abs were… Well, my abs were not incredible. But after a bunch of Tread classes, perhaps they’ll be on their way.

Like the bike, the Peloton Tread is a solidly built machine, with some very intuitive changes to the traditional design of a treadmill. The speed and incline are controlled  by a round knob on either side. Roll it away from you to go faster or higher, roll it towards to to slow down or drop the incline. The days of having a stroke while waiting for your speed to go from “8.2… 8.1… 8.0…” are long gone. This is huge, because at one point, I was doing a 10 mile per hour sprint for 60 seconds, and if I had to wait 20 extra seconds for the belt to slow down after I finished, I’d most definitely be dead now. 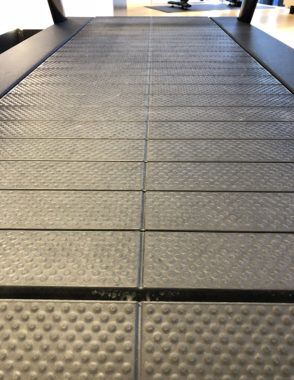 It’s also very well built. For those who’ve met me, you’d never call me “light on my feet.” I’m a solid 210 pounds on my lightest day. My biggest complaint about virtually every treadmill is that if you’re not as thin as Meb Keflezighi, the belt will “skip” every once in a while as you’re running. Not this machine. See the break as the belt “tile” bends? That’s what I think prevents any skipping. It’s not a belt. It’s individual tiles, which I’d assume means that each one is locked onto the belt under them somehow. Result: Not one skip, from the first walk to that 60 second “I’m gonna die” sprint I mentioned above. The machine is super-solid.

The screen is gorgeous, of course, and while I didn’t get to use the speakers underneath, (because it was a studio class,) I imagine they’ll be as good. I also believe you can use your own speakers, like I occasionally do with my bike, by connecting them to my Sonos speaker in my bedroom. 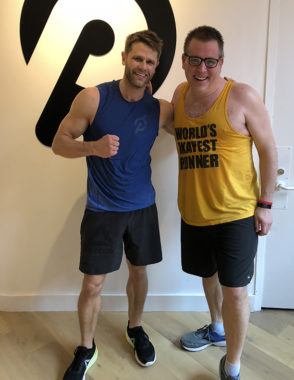 I took a 45 minute “bootcamp” class with Andy Speer, one of their new trainers. Much like their spin trainers (Denis Morton, for example,) I immediately hated everything about this man, from his peppy smile to the hundreds of individual rippling muscles that happily glistened under the studio lights.

Yes, I’m being sarcastic. I hate him the same way I hate anyone faster than me: Admiration, respect, and a desire to improve myself because of them. Andy was no different, and he’s yet another reason I love the OnePeloton family so much – The trainers aren’t just trainers. They truly like people. As someone who speaks on the customer economy on a regular basis, I can’t tell you how important this is. It makes the workout that much stronger because the instructors really do care about you. This was my first class with Andy, and he’s right up there with the other instructors.

I burned over 500 calories on the Tread this morning, and then had close to 24 minutes of abs, core, and back to complete! There’s a reason this was called a bootcamp. I sweat more than I’ve sweat in quite some time, and by the end of the workout, I was destroyed. It was an amazing 45 minutes.

Also, you choose your speed. Just like the bike, you get a suggested range from the teacher. But in the end, it’s your choice.

For those who already own the bike, imagine burning 350 KJ on the bike, THEN doing another 24 minutes of core work. Let me tell you… This workout didn’t play around.

Andy told me that they’ll have many more types of classes as the studio continues to evolve, including all running, speed work, and the like. This excites me, as it might be an awesome way to improve my triathlon runs, as opposed to my current way of racing triathlons, which is to crush the swim and bike, and “get through” the run.

The only possible downside I noticed is this: During the bootcamp parts, (off the Tread,) I had to watch Andy to see what he wanted me to do for each workout. If we’re doing these workouts at home, we’ll have to lift ourselves off the floor to watch the class on the screen to learn the exercise. But I can’t imagine we’ll need to do that more than once or twice until we get it.

The biggest issue for apartment dwellers like me is going to be space. Not only do you need space for the Tread, but you also need space next to it where you can do the bootcamp exercises. I’m already thinking of moving my six year old into the closet so I can workout in her room. Should be fine. 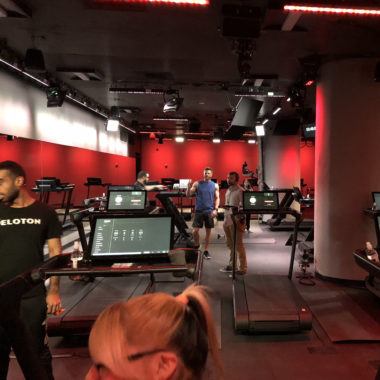 The addiction behind Peloton isn’t that you’re going to a spin studio or a gym. That’s the beauty of it. It’s the opposite. The addiction comes from the fact that your gym is now less than three feet from your bed. (Less than 12 inches if you live in a NYC apartment like me.)

That said, their new studio on Christopher Street is gorgeous. It’s the former David Barton gym that’s been sitting unused for two years, and considering the timeframe and budget Peloton had to work with, what they managed to do with it is pretty impressive. According to Peloton, they plan on keeping their 23rd Street Spin studio as well.

I put my deposit down for the Tread months ago. I’ve drank all the Kool-Aid Peloton has to offer, and I’m a junkie, hands down. I was worried about them losing their focus with the Tread, but in the end, it doesn’t seem like there’s anything to worry about. It’s an amazing machine, and the Tread workouts could be as game-changing as the bike is.

The as of yet unanswered question though, is this: It’s one thing to convince the average, non-gym-going consumer to buy a Peloton bike and take a bike ride in their bedroom or basement. Will they also be able to convince them to buy a treadmill and start… ugh… running? The verdict isn’t in yet, but if current Peloton junkies have the same love for the Tread that they have for the bike, it’ll happen, and make OnePeloton the first “Unicorn” company in the fitness space.

Disclosures: This review is 100% mine, I have complete editorial control. Peloton hasn’t paid me for this review, nor have they viewed it beforehand. Peloton has given me free classes at their studio, however I’ve purchased both the bike and tread on my own, with no discounts.

PS: My Leaderboard name is PeterShankman.