That’s the message that Mayor Bloomberg stressed today. And he was right.

It was quite a day – I wound up being one block away when it happened, I was having coffee with a freelance reporter at the time.

Heard the sirens first – thought it was a typical Operation Atlas drill, until I saw the smoke.

Got to the corner, took the following photo: 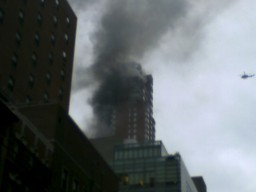 Watched for a while, made the following observations.

Mayor Bloomberg was on the scene within 30 minutes, walking right down 71st St. on his way to the scene .His leadership continues to be extraordinary.

Traffic was a nightmare – Seems to me it would have been more logical to shut streets down many blocks away, keeping the traffic clear around the site – seemed like there were many, many times where I watched fire engines and cop cars fighting with pedestrian cars and the like. Not sure why it wasn’t clearer.

The Mets are considering delaying or cancelling NLCS Game 1 tonight – It’s more a question of weather. The news is asking whether or not they should cancel the game. I don’t think they should. A moment of silence would be more fitting.

But the weather could put that all aside, anyway.

What to take away from this? Things happen. They always do. But life is ok – and just because a building is on fire, doesn’t mean our city is being attacked again.