A messenger arrives at my apartment this morning with 6 empty cans of Pepsi, each one representing a different Pepsi logo, starting in 1890.

Twenty minutes later, he’s back, with a second delivery, 6 more empty cans of Pepsi, logos continuing up to present day.

Finally, he shows back up again. (By this time, Karma and NASA aren’t even reacting to the doorbell anymore.) This time, he’s got six cans of Pepsi, (full) with the new look of Pepsi, and a letter explaining that Pepsi is reaching out to me and handful of other “digital and social influencers” regarding a “multiyear, company-wide transformation.”

It also tells me that I’m one of 25 people to see Pepsi’s new look first. I think that’s kinda cool.

They also invited me to a Friendfeed room – which is interesting – a cool way to see how Pepsi is utilizing social media – http://friendfeed.com/rooms/pepsicooler

So, without further ado, here’s Pepsi’s new look. The hand is Meagan’s, and didn’t come with the Pepsi. 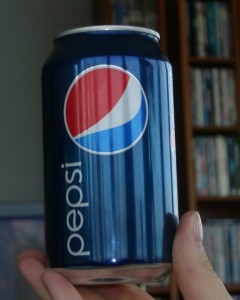