Welcome to Singapore. Having lived through the 5K from hell, I’m back, chairing the Mobile Content World Asia 07 Conference.

Last night the conference unofficially started, with a few of us touring the sites of Singapore and winding up (naturally) at a Mexican restaurant. (famous for their margaritas.) I was thrilled for everyone else as I drank my Diet Pepsi. (Pepsi Light, as it’s called here.)

Mexican food was good, though. 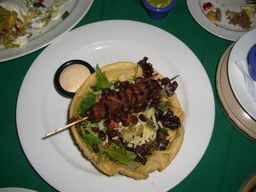 After dinner, we walked around and found several things. A giant water-spewing lion, for starters: 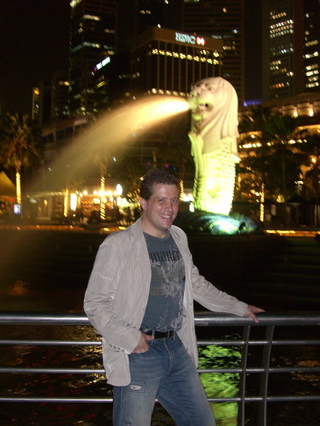 America’s influence, (for good or bad,) is everywhere you look, virtually anywhere in the world. 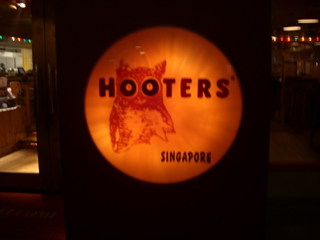 Finally, as we were walking back to the hotel, we came across a street musician, plaing for change. He was surprisingly good, and invited me to join in. A few Beatles tunes later, and we were on our way.

Now, to the conference.

Woke up early, (way too early, actually, for a 1pm EST (1am Singapore) conference call, then another one at 1:45am. Once those were done, got back to sleep until 6, woke up, hit the gym (ran 3 miles, in the blissfull air conditioning,) then ran upstairs, got dressed, and headed to convention center.

Walking around before the conference started, I found the mBlox booth completely empty. Took the photo below, and was going to send it to Greg Clayman over at twophones, since we’ve both worked with mBlox in the past. 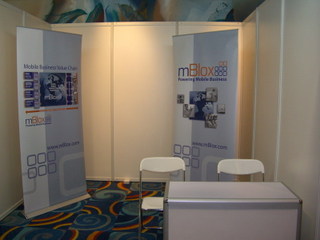 As I was giggling about sending the photo, Faissal Houhou, VP of Biz Dev for mBlox Asia Pacific ran up, shouting “take the photo with me in it! I’m here! I’m here!” He was getting coffee, and we chatted for a few minutes. I told him I’d make sure to let my readers know that Faissal was, in fact, on time and in his booth.

Unfortunately, it’s currently about 60 degrees in the conference center. The AC has apparently gone insane, and it’s coming to kill us all.

Finally, I got to introduce Giora Kanner, MD of South East Asia APAC Division for Comverse. Unfortunately for him, I found out it was his birthday, and he got introduced to the sound of 200 people wishing him a happy birthday, courtesy of me. I think he now hates me. 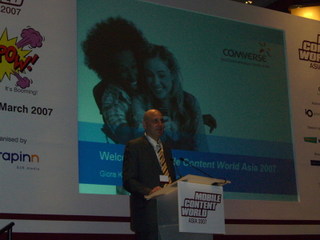