Lessons About Cynical Facebook Followers, Raising the Bar, and LensCrafters

So I’m halfway to LaGuardia Airport yesterday, when I look out at a street sign to see where I was, and realize I can’t read it. That means one thing – Idiot-Peter left his glasses at home. My backup suitcase pair was on my counter in my apartment. Yes. I know that defeats the purpose of having a backup suitcase pair. Shut up.

Anyhow, it’s too late to go back to my apartment, so I figure everything will be fuzzy for the next 24 hours, until I get home. As I was waiting for my flight, on a whim, sent a tweet to LensCrafters.

Hey @LensCrafters, flying to Chicago, left my glasses in NYC. If I hit ur Mich Ave store when I land, can I get a replacement pair same day?

Within five minutes, they’d followed me, asked me to DM specifics, and set me up with an appointment to get a replacement pair at a store close to my hotel in Chicago.

That’s awesome. But that’s not what this post is about.

When I posted on Facebook about having my new glasses and how awesome LensCrafters was to me, it was like I’d opened a box of bees. Examples from Tim Brechlin, Kellie Markowski, and Lisa Bonelli Mott, respectively:

Would LensCrafters have done that if you weren’t you, though, Peter? That’s the real test for customer service being at a level of creating Zombie Loyalists — that everyone, whether they have 166,000 or 166 Twitter followers, gets the same treatment.

Great for you…no way in HELL would that have done that for anyone else..

They wouldn’t have done that for average Joe Customer. I’m glad they helped you out but as someone who has been a customer before, they can’t always guarantee that type of turn around. Still nice that it worked out today & the frames look good too

Now then… If you permit me, allow me to tell you why all three of these comments are wrong…

Yes – I have a ton of twitter followers, and a lot of Facebook fans. (including a ton of cynical ones..) But what if you think about it this way:

If a brand goes out of their way to treat a customer with a large reach well, but then fails the regular customer, they’ve hurt themselves that much more. If you publicly set your own brand’s bar high with one person with reach, you’d be that much more of a fool not to do it with everyone. 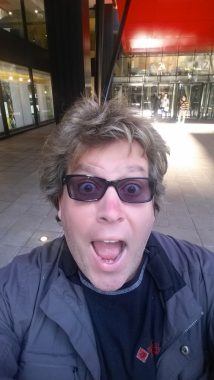 If LensCrafters went out of their way to help me, but their entire Twitter stream was full of miserable customers, they wouldn’t be in business for long. LensCrafters realizes that, and it’s my opinion that they value customer service to the point where they’re willing to treat every customer well, not just those with large followings.

As we move head-on into the customer experience economy, only those brands who value their customers and have empathy to solve their problems will survive. (TWEET THIS!)

I think LensCrafters is one of them, and I’m impressed by how they treat not only me, but their regular customers, as well.

Am I right? Thoughts? Do tell below. I’ll be able to read them, because I got my glasses! 🙂

This post was inspired by my friend Amber Powers, of Powers Digital Marketing, who was smart enough to realize and post about the concept of raising the bar for one and all.