Lessons from a track meet

Sunday morning dawned 24 degrees and sunny in New York City. Clear, with a bit of wind. Perhaps a bit chilly, but perfect conditions to run a 5k race.

Unfortunately, I was running a 5k race in Singapore, where Sunday morning dawned with temperatures in the low 90’s, and about equally as high humidity.

When you’re dripping with sweat as you sit in the stands, not moving, watching other people race, you know you’re going to have problems.

The way I see it, this race, my entry in it, (and subsequent crappy results) are all Google’s fault. Last week, while sitting in my office in New York, I Googled “Road Race in Singapore +Run” and found the “Singapore 1st Allcomers Meet 2007.”

I show up at the track (first footnote – I’ve never run a race on a track before) and get my registration. It cost Four Singapore Dollars (or $2.62 American) to enter the race. (Take that, $75 dollar Nike Half Marathon!) 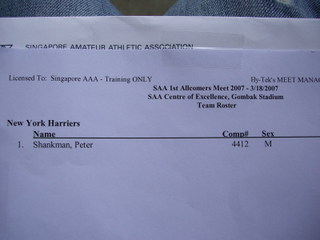 After paying and getting my number, I sat down to watch some 60 meter dashes and the like.

That was my first “Toto, we’re not in Central Park any more” moment.

First of all, the majority of people racing (meaning, like, everyone) was a little older than half my age. The majority were high school and college students. An occasional “older-than-that” person, but we’re talking the median age being around 23.

Actually, the median profile was 23, bone skinny, and non-sweaty.

I’m 34, fat, and was leaving small puddles of sweat every time I sat down, to the point where a small Singaporean man was following me with a mop.

“You come here to race?” a nice older gentleman asked me.

As we talked, he told me he had a daughter who was racing in the 800 meter race. He was happy because she was doing well, but she had a lot of work in front of her.

She then proceeded to come in first in the women’s 800.

As we kept talking, I found out that all of the stadiums in Singapore were public, and open for use to anyone who wanted them, as long as there was nothing organized going on at the time. How amazing is that? I wish we had that in the US! Then again, I wish we had tracks in Manhattan.

“Participants in the Men’s 5,000 meter race, please come to the call room.”

That was my cue. Throwing off my jeans and NYC marathon t-shirt, I wound up in shorts and my New York Harriers tank top. Hey, even if I sucked, I was gonna REPRESENT. 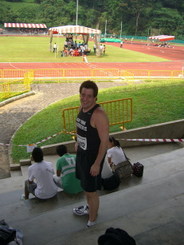 Getting to the track, we hang out and watch one more race end. The women’s 3,000 meter race. Four women participating.

It was at this point I realized that there were only 12 people in my race! I looked around uneasily, and gulped. 12 people? I’ve NEVER run a race in my life with less than a hundred participants, and the majority of them have well over a few thousand.

I was struck by a massive thought: Unlike people who live in Singapore, or Montana, or Kansas, or Jakarta, my “local running club” has over 60,000 people in it. To belong to the New York Road Runners guarantees that there’ll always be a race, but also guarantees that the chances of winning for someone like me are about zero, all the time. When people like Paula Radcliffe routinely show up for your local 10k, you obviously ain’t winnin’ shit. But, on the plus side, it also means that no matter how crappy I do, there’ll always be a few thousand people behind me who did crappier – thus, my 7:53 miles don’t feel that terrible to me, because after I’ve gotten my bag and am walking home, I see people still coming in.

Unfortunately for me, that “oh, there are still people coming in behind me” cushion makes it really, really tough when you’re in a field of 12, on a track. I realized that being a NYRR runner lends to it a level of complacency, because as long as there are still a few thousand people who just want to finish and don’t care about their times, I’ll never know what it’s like to be even remotely close to last.

We took our positions. I was fourth on the line. A 5,000 meter race (a 5k) is 12 and a half times around the standard 400 meter track. You run half a lap, then 12 full laps, to finish at the finish line. As we took our positions, I wiped the sweat off my brow one final time.

BANG! Went the starter’s gun. (In New York City, for obvious reasons, they don’t use a starter’s gun.) I remember it being quite loud.

That’s the last thing I remember, as 11 other people immediately elbow past me, leaving me to wonder what the fuck just happened.

Less than a quarter of the way into the first lap, and I was dead last. Oh, and my race-pace pulse of 165 had shot up to 180, and showed no signs of slowing down.

This was a wake-up call from hell.

With two laps down, I was still dead last, and my pulse was still about 184. With four laps down, the leaders started lapping me. But then, at the sixth lap, someone who went out way too fast started having problems. He was 16, and this was his first track race.

Well you know what? I was 34, and it was MY FIRST FREAKING TRACK RACE, TOO. I passed his ass.

But that was about all I passed. With four laps left to go for me, I heard the “ding ding ding” of the “one lap to go” bell for the leaders. OK, whatever. I’ll just finish when I finish.

My pulse, which decided that it was a big fan of the police code for “homicide,” stuck dead on at 187 for the remainder of the race. Breathing proved challenging.

As I came across the timekeeper’s table, with my one lap to go, I heard a few of them say “One lap to go.” I thought (apparently, out loud,) “What, I don’t even get the bell?” I totally imagined myself getting caned for that, but sure enough, someone rang the bell for me.

I finished the hardest 5k race of my life, coming in eleventh of twelve, with a time of 24:29, or a 7:53 pace. In New York, I would have been ok with that, and would have left the park with the other Harriers, and headed to brunch.

Here, I walked over to the little Orange-Ade cooler, grabbed two cups, downed them while trying not to puke from the race, grabbed my bag, and headed out.

“There is no better than adversity. Every defeat, every heartbreak, every loss, contains its own seed, its own lesson on how to improve your performance the next time.” Og Mandino

I’ve become complacent. I’ve become what I most feared – stagnant. Even with my whole “giving up sugars, no alcohol,” etc., I’ve assumed that I can only do so much, so I’ll only try for that.

I let myself believe that I could only do so much, and even that wouldn’t matter, because I know I’d never be last. That was a mistake.

I got my ass handed to me today. And this time it really stung, as there wasn’t the cushion of an additional 2,000 people behind me to soften the blow.

So maybe this was a good thing. Even though I’m out here this week to chair a conference, a conference from which I can learn, maybe the real lesson came on a blistering hot day, on a government owned track, with 10 people in front of me, and no cushion behind me.

And despite how much of a failure I feel like right now, maybe that lesson makes it all worth it.