Lessons a Month After Merging my Facebook Personal and Fan Pages

A bit over a month ago, I was contacted by Facebook, asking if I’d like to “merge” my “fan” page (I’m STILL not comfortable calling it that) with my “personal” page on Facebook, and turn my “fans” into “subscribers.” Facebook’s logic there was that I’d only have to post all my content in one place, and could determine which content was “public,” (i.e., subscribers, the world, etc.,) and which I kept only for my “friends.”

I volunteered to give it a shot, even after being told there was no turning back – i.e., my “Fan page” would disappear, and I couldn’t bring it back.

After asking a ton of questions (and to Facebook’s credit, the person who reached out to me answered every single one, no matter how basic or stupid they seemed,) I told Facebook to flip the switch.

Within 24 hours, http://facebook.com/petershankman redirected to my personal page, and my “Fan page” was no more.

A little over a month later, here’s what I’ve learned from that transformation.

Overall, I’m happy with the change. There’s no doubt that it’s easier to update one page vs. two, and it’s most definitely easier to update Facebook via mobile, which, lets be honest, is where a decent amount of content happens. Before the merger, I’d have to email photos to a specific email address and hope they made it – I couldn’t tag or add location until I got back to a laptop. So there’s no doubt that being able to fully utilize the Facebook Droid App for all that it’s made to do (tagging, location, and privacy) is a big bonus.

1) Probably the most important, the merger to one page means I’m more likely to post more quality content. I never truly realized the value of the Facebook App on my Droid until my pages were merged. Because there was no support for Fan Pages (yes, you could email to a private address, but nothing like what you can do with the app – tagging, location, etc.) I was more than likely to take a photo and Tweet it out, or save it to post on my fan page if I remembered later or the next day. In other words, if I was away from my laptop when I wanted to share content, those on my “fan page” got the short end of the stick. With the merged page, I have over 50,000 subscribers (formerly fans) in addition to my “friends” who now can see my content in real time, tagged and geo-tagged, as long as I make sure the content is public. As someone whose mantra is “having an audience is a privilege, not a right,” I can’t stress enough the power of this change: Facebook has taken away all the previous barriers that crippled my fan page when I was mobile, and I can truly offer my audience the best content I have, as it happens. At an event and spot a celeb? I can post and tag. At the airport with four hours to kill and want to offer anyone who knows me and happens to be there access to the airline lounge as my guest? Can do it in a heartbeat. The ability to use the mobile apps to share content and choose what level of sharing I want is definitely the best result of the new merged format. 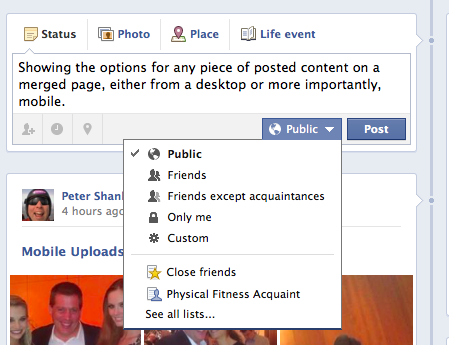 2) Truly “owning” privacy, (to the extent anyone actually can on Facebook,) means I’m more aware of everything I post. Huh? “Of course you’re aware of it, Peter, you’re posting it!” Not quite. Think about it: You post a photo or a joke to your personal page – You can do it without thinking – “It’s my personal page, I can do whatever I want.” Posting to a fan page? Same logic applies in a different format: “My fans are a step removed from my “friends,” I can only post “this type” of content.” It’s an easy rule from both sides, and it’s easy to get into a rut with it. But there’s the problem: We’re lured into thinking in only one of two ways – “personal” or “fan.” That gets boring fast, and prevents you from engaging your audience anywhere near your full potential. Because I have to decide for who I’m posting every time I post on the merged page, I’m more likely to really think about my content. Does this content really matter to my fans? Am I just posting to show off or to hear my own voice? Will this be relevant to people who have never met me personally? All these questions come into play with every post I make, whether a status update, photo, video, or link. And while you might be thinking that it’s a pain in the ass, in fact, it’s the opposite – It makes me ask if what I’m sharing is really worth my audience’s time. And that’s how we should always be thinking about our voice: Putting our audience’s needs before ours.

There’s really only one negative that stands out, and I’ve learned how to compensate for it. When your pages are merged, and you have both “friends” and “subscribers,” only friends can post on your wall. On a fan page, any fan could start a conversation. With subscribers, only confirmed friends can. When I first noticed this, within 12 hours of the changeover, I was mortified – I emailed and asked why, and the answer was an obvious one, to avoid spam posts. I get it, but I was still concerned that I was stifling my audience’s ability to talk to me – to reach out and start a conversation. Over the next week or so, I realized that if you focus on figuring out the best way to communicate with your audience, them not being able to post on your wall isn’t that important. I do hope Facebook changes their logic here and lets subscribers post like they could before as fans. Even if it means you have to scrub spam daily, I think it’s worth it. But until that happens, I’ve learned that as long as I give my subscribers the ability to comment on all my content I make public, then my audience doesn’t feel stifled. I also ask probing questions that people want to answer in the comments – Anything from asking about their evening plans to asking if anyone has great images of their last vacation.

To make up for the lack of wall interaction on the part of subscribers, it does mean I have to post a bit more – But that’s not a bad thing, if you post with your audience in mind. I also believe that Facebook will offer the option for subscribers to post on walls of “merged” pages soon enough – I don’t see a downside to it. They can already do it on fan pages, and Facebook’s spam algorithms are certainly decent enough. So I think that’s just a matter of time.

Is the merge right for every brand out there?

No. The fact is, there are tons of large companies who have several people who manage their online brand, or are too big to be associated with one person. Any large company comes to mind – A car company – Any national or international brand – You get the idea. They need to keep their “fan” pages as they are. They’re a true “Brand.”

I think the problem is that with the advent of Social Media, everyone thinks they’re a “brand.” And in some sense, they are. But in the sense of a “fan page,” Facebook is right in making this change. A “Brand” of a person, a celebrity, or the like, should be “them.” A “fan page” is a misnomer – It should be a page about them – One page, they can adjust to make public the content they want public, and private the content they want private. Much like in real life, if you think about it. And that’s smart. So for every brand? No. For most people/celebrities/public figures who have “fan pages?” Yes. It’s time to convert.

Am I happy I made the change? Yes. The ability to post all my content to one place and decide on the fly who gets to see it in real time is a lifesaver – and I’ve definitely noticed my interaction and engagement from subscribers is higher now than when they were just fans on the “fan page.” Remember this, too: I’ve always said that it’s only a matter of time until the line between our “personal” and “professional” brand goes away, and it’ll be up to us to choose what gets posted in our world. I think this is another step towards that happening for those who aren’t “corporations,” but rather, who live in that mixture between who they are, and the professional brand they’re trying to cultivate. Facebook’s merger option should help anyone in that space, and as long as we’re smart enough to realize we should be there, this is a benefit, no doubt.

Thoughts? Comments? As always, I want to hear them. Leave them below. And by the way – If you’re not a subscriber to me on Facebook, you can fix that here.