Back in the late 80s, when I was at High School of Performing Arts, my friends and I used to walk down the streets on Manhattan and look for those double-decked tour buses full of tourists from Iowa or Montana or whatever. When we’d find them, we’d run a few blocks ahead, and as the bus approached us, we’d fake a mugging. Either I’d mug my friend, or my friend would mug me. We’d make it super-realistic, shouting “GIVE ME YOUR F’ING MONEY OR I’LL BLOW YOU AWAY!” or, “I NEED THIS FOR CRACK!” or something like that. The mugged would hand over the wallet to the mugger, while the tour bus, amazed and shocked, would take hundreds upon hundreds of photos. The bus driver, heck, even the local cops knew what we were doing, and they all loved it. “Those damn acting kids,” the cops would say. It was a blast, and allowed us time to hone our craft in front of an audience.

But you know who loved it the most? The tourists. Why? Because when they got home, they had photos of a REAL-LIFE-NYC-EVENT! Sure, all of their friends came back from the big bad city with photos of the Empire State Building, the Statue of Liberty, and the Twin Towers. (RIP.) But this select group? They got to EXPERIENCE something! They got something their friends didn’t get! They had real photos of a real NYC thing! A mugging! Wow! OMG, that was so much fun.

Even at age 16, I knew that for the customer, it was all about the experience. News flash: It still is.

Over the past two days, I’ve had the amazing good fortune to be asked to participate in three experiential things, the last one of which is happening in a few hours. Sunday morning, I was a passenger on the maiden voyage of the new United Airlines Dreamliner 787, on it’s first-ever revenue flight, from Houston to O’Hare, where I naturally took lots of photos.  Then, upon arriving home, I rushed over to the York Theater company, as an audience member of the final performance of Closer Than Ever, an off-broadway revue by Matby and Shire, one of my favorite musicals of all time. Finally, tonight, in about five hours, I’m a guest at the IMAX media premiere of Skyfall, the new 007 thriller.

What do all three of these things have in common, other than how when I read the above paragraph, I sound like a tool, and need to swear that I have a point here and it’s not about gloating? Well, all three experiences here are limited edition experiences, in that they can’t be repeated. They’re not open to the mass public, and they’re not something that will ever happen again. They’re special. 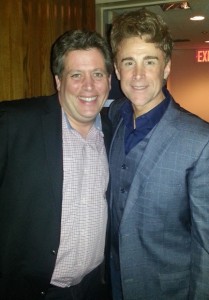 With Sal Viviano, star of Closer Than Ever

The people who get invited to these things feel special, as well, and that’s my point: For quite some time, I’ve been a loyal (and quite vocal) supporter of United, The York Theater Company, and IMAX, and will go out of my way to get other people to utilize and spend money with them. Now I have even more of a reason to do so. Why? Because all three companies gave me something to get excited about, to share, and yes, in some way, I suppose to gloat about.

The best part? They did it organically – That means, all three companies above made me share without EVER asking me to – Without ever pressuring me to – Without ever having to say “Hey, click here to share this with your friends.” Which, as we know, is… well… icky. That feels forced. It doesn’t work anywhere NEAR as well as doing something amazing that makes your customers want to share how awesome you are without being asked.

With the advent of every single person in the world carrying a camera (and most likely video camera) with them, there’s no reason anymore to have to do your own PR. You can easily get your best customers to do it for you, provided you give them opportunities that not everyone gets.

Let’s face it – We’re a society that LOVES to feel special. We can deny it if we want, but we LOVE to be recognized. It’s in our DNA. Everyone wants to cut the line, get in front, and be acknowledged. It’s who we are.

If you’re a business, you can do that for your customers every single day, without going overboard, without alienating other customers, and without spending a fortune on it. Here’s some simple ways:

Own a restaurant or bar? Recognize a repeat customer? First drink on the house. Easy enough, it’s a “welcome back.”

Food truck? Promote loyalty – Name a sandwich after the customer who orders it the most – for the week. You know he’ll be there every day, and bring all his friends to have “his” sandwich. See The Fat Darrell for inspiration on this one.

Auto shop or gas station? Put a sign up: If your license plate is XRY-582, you get ten free gallons! You know the license plates of your most frequent customers, they come in all the time!

Hair salon? Free color to your top customers. Just once, that’s all they need.

What do all these have in common? You’re reaching out to customers who already like you, and feel a loyalty and allegiance to you already! This makes the act of them sharing their good fortune with the world a no-brainer. They’ve received something good and exiting! They want to share it and tell the world how awesome it is!

Anyone can win money, anyone can buy a ticket to a theater, anyone can take a flight. But when you’re invited – when you’re offered a chance to do something that other people can’t do – That’s what makes you want to tell the story. And when someone tells your company’s story in a positive way to someone they know personally? That will almost always turn into revenue. And revenue, as we all know – Well, that’s the reason for marketing in the first place.