Ah, yes… John Gruber called me a “blowhard,” and blew up my traffic. I’d call him a douche, but he has more traffic than me, so my insulting him won’t help him as much as him insulting me, so I’ll leave it at this:

When I had my Segway in NYC, I was featured on the front page of USA Today. A two page spread in the Daily News. A two page spread in the NY Post. In NY Newsday. Etc., etc., etc. Why? Because it was new, and the media liked to talk about new geeky things. Problem was, I said all the wrong things to the media, JUST LIKE SCOBLE IS DOING NOW. The photo of him in the shower has ALREADY appeared in many, many media outlets. So what do people think? They think what they read and see, even if they don’t know who the hell Scoble is.

I stand by my statement. Did I alone cause Segway to fail? No. And I never said I did. But it was the “geeks only” concept (of which I was a part) that did. And Scoble is doing the same thing.

Thanks, Robert Scoble. Your review of Google Glass was SO good, you’ve pretty much guaranteed that no one is going to use it. You’ve single-handedly pushed Google Glass into the far reaches of Dork-dom for the forseeable future.

On the plus side, The Segway was getting pretty lonely in Dork-dom, so it finally has a friend.

See, it’s people like Scoble who ruin it for regular people, the masses who will determine whether Glass succeeds or winds up in the land of the Apple Newton. His review was so over the top, so up Google’s ass, so “I’m taking a freaking SHOWER while wearing them” (complete with photos,) that no normal, non-over-the-edge Geek will want to come within a hundred miles of them. 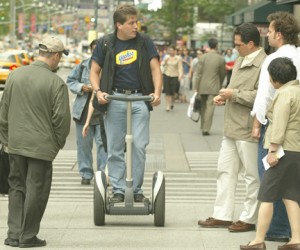 So much for mass adoption. It’s the Segway effect. I was the first person in NYC to own a Segway back in 2003. It. Was. Awesome. But I was also on the damn thing EVERY MINUTE of EVERY SINGLE DAY. I’m not proud of that. I did back then to the Segway, what Scoble is doing to GGlass, today, and he should have learned from my mistakes. I took my Segway with me everywhere. I got into fights in buildings when I was told I couldn’t bring it in the elevator. I rode it in Whole Foods (by Geek law, I should have never been allowed to have sex with a woman again for the rest of my life based on that action alone) and I took it onto the damn subway. I was always touting to ANYONE who would listen how it was revolutionary, how it was going to change lives, build cities, and stop wars. I was on the front page of USA Today (no joke, Google it) riding my Segway. I became “that guy” with my Segway. By my actions (and hundreds of others around the country doing the same thing,) we doomed the Segway into the land of Geeks and Dorks forever more.

Scoble is doing the same thing to Google Glass, something which DOESN’T need to happen. Google Glass has AWESOME potential, but if all people see is the creepy guy in the Men’s Room (YES, he wore them into a Men’s Room,) they’ll be dead before they’re even alive.  The review shouldn’t talk about how you use it in the shower, but rather, should be talking about how the masses can use it – I.e., grabbing a photo of something happening in real-time, stopping a crime, identifying a lost child.

Reviews should make things human for the masses. Scoble? He just demonized Google Glass to the land of “never-get-laid-again.” I’ve been there. It’s a horrible place.

Bad form, Scoble. You of all people should know better.