I Nearly Died on Saturday

I nearly died last Saturday while skydiving. Now, this technically isn’t anything new — When you think about it, every time I skydive, I have to actively take a role in preventing my death. But this time, it was complacency that nearly killed me.

Some background: When a parachute deploys, it slows the skydiver from 120 miles per hour to approximately five miles per hour in, on average, three to five seconds. To do this without breaking several bones in the skydiver’s body, a piece of fabric called a “slider” comes out first, essentially using the air you’re falling through to “push” against the canopy and slow down the opening of the parachute. (It’s a bit more complicated than that, but that’s not important to the story.) Anyhow, the parachute opens nice and calmly, and you gently float to the ground. 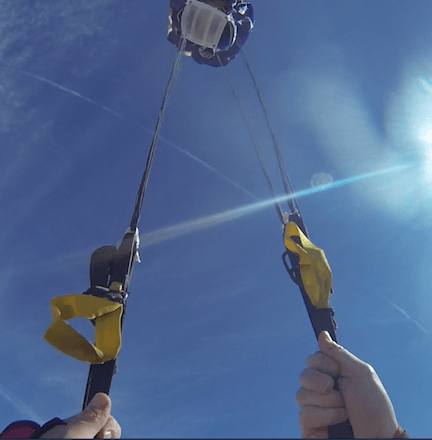 On Saturday, my parachute slider didn’t “slide.” Instead, as you can see in the photo, it hung up all the way at the top of the unopened parachute, while my speed towards the ground hovered around 80 miles per hour.

“I’m sure it’ll open.” I said that to myself over and over and over, for what seemed to be an eternity, while the altimeter on my wrist spun round and round towards ultimate zero: the ground. My hand snuck to the one place I always hope it will never have to go, my cutaway handle, to be used if my main parachute isn’t functioning properly, allowing me to pull my reserve parachute.

With less than two seconds before I had to pull my reserve, and eleven seconds (ELEVEN!!) since I started the opening process, my parachute did open fully, resulting in an uneventful canopy ride. But looking back and watching the video, a much bigger issue arises:

“I’m sure it’ll open,” nearly killed me. As it happened, complacency cost me 1,200 feet of altitude I should have never been willing to give up.

I was complacent. I let hundreds of past “no-problem” openings dictate my actions this time. And that’s a mistake that can truly hurt you, whether it’s your body impacting the ground, your business going broke, or your personal life imploding. Make no mistake: Complacency can kill you.

As they say on financial firm commercials, past performance is no guarantee of future success. Just because it worked once, or a hundred times, is no guarantee that it’ll work that way again. Not taking action because you’re uncomfortable making a change into something new is the absolute worst thing you can do.

Complacency leads to indecisiveness when the one thing you don’t need is to be indecisive. Don’t let yourself settle on something “because it worked like that once before.” You need to evaluate each situation differently, because each situation calls for different actions. Autopilot only works in planes, and even then, the override switch can never be that far away.

Pulling that reserve and changing your course of action is a scary thing, sure. But you know what’s even scarier? Letting something negatively affect you, your life, or your business because you chose not to take any action to fix the problem you’re currently having.

There’s a huge discussion on complacency currently taking place in the online mastermind for entrepreneurs that I run. You should join us!