First off: I will not, under any circumstances, reveal the company I mention below until after they’ve made their own announcement, if they ever do, so don’t ask me. I might never mention it. Who knows. Also, some of the information I’m posting here has been redacted.

Everyone is always concerned about digital espionage. “My account was hacked!” “I clicked on a bad link!” “Fifty million credit card numbers were stolen!” The fact is, however, that digital espionage is the least worrisome thing for the majority of companies. The chances of your company getting “hacked” and information being stolen is minimal, compared to getting in trouble due to the stupidity of your employees.

I was flying home this past weekend from Florida. I got into my seat and got settled. My seatmate sat down, an older gentleman in a suit and tie. We exchanged pleasantries, and he put his Bose noise-cancelers on as soon as we took off. (Bose headphones are the universal traveler sign for “leave me alone.”)

I started catching up on Dexter on my Mac. About 20 minutes in, I happened to look over to my left, and this man was reading a huge binder. Had to be at least 100 pages, if not more. He was on the first few pages. I looked over, and in giant letters, it said “KEY INVESTMENT HIGHLIGHTS.” That caught my interest, as it would anyone. Within five words, I realized that he was reading an overview of a very large media company – In another thirty seconds, I’d put it together – This guy worked for a company that was hired to help this very large media company sell themselves. In other words, a company that produces both online and offline properties, that you probably read every week, was up for sale.

My seatmate couldn’t have been more clueless. He had his headphones on, enjoying his silence, while flipping pages in this binder, taking notes, not looking up, not aware of his surroundings in the slightest. I could have been having sex with my glass of Diet Coke two inches away from him, and he never would have noticed.

He spent an hour of the flight on several pages that were titled “Liabilities” – It was all proprietary information about problems the company was having, and how they planned to fix them. Unreal.

My first thought was that I was totally out of the loop – That it was public knowledge that this company was being shopped around, and I’d just missed the news on it. But then I thought long and hard about it and realized that no, I’d have heard about this. In other words, the man sitting next to me was reading proprietary information, information that could be very, very damaging to this company if in the wrong hands, and he couldn’t have cared less about it. When I landed, I confirmed it. This was extremely private information.

I’ve often said that privacy doesn’t exist, that we all need to be smarter, that instead of working on new ways to gain more fans, perhaps we should take a day and work on situational awareness!

I decided to see how out of it he really was, and also prove a point. Check this out. 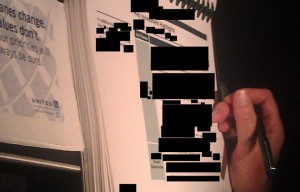 Heavily Redacted by Me

This is one of a handful of photos I took with both my iPad and my Droid. Just to see if I could, which obviously, I could.

The man next to me caught a break that day. I’m not a dick. I’m not going to name the company, nor the company he works for (which was on the bottom of every page of the report.) But I have a feeling I’m in the minority here.

Guys, we have to be smarter than this. We simply have to. We can’t afford not to. Here are four tips on how to be:

1) Assume you’re always being watched. When I went to high school, there was a giant fountain across the street. Not a week went by when some idiot kid didn’t dump a box of Tide into the fountain. Why? Because in the 80s, surveillance cameras were hella expensive, and very few businesses could afford them. Now? They’re about $20, a good one for $50, and they’re EVERYWHERE. For kicks, I walked around the block this morning from where I live. Only counting the ones I could see in plain sight, I counted over 100 in a one block radius, including stores, banks, red-light cameras, etc. And those were only the ones we could see. 100! In a one block radius! Assume everything you do can be watched, and probably is. You have to assume this for everything, from your work life to your personal life. It means you’ll be seen doing anything stupid that could get you in trouble, from doing drugs with people you assume are friends, to meeting someone for insider information in a parking lot. It’s too easy to get caught nowadays.

2) Assume most people are much less nice than me. I knew immediately what I was looking at, and also that I’d never go public with the information. Why would I? What could I gain from it? How would it help me? But think about all the people it could hurt – Innocent people who just happen to be involved with the company, for starters. It’s really easy to assume people are nice until proven otherwise. Sadly, I’ve learned that assuming all people are nice can get you into trouble. I’m not saying don’t be nice to people you meet – But don’t start sharing information with people until you truly trust them. In other words, enter every interaction with a healthy dose of cynicism. That’s not a bad thing. It’s a smart thing.

3) It’s always little things that will nail you. You have any idea how many times I’ve been in an airport or hotel lounge, when I’ve heard someone spouting off their credit card to the person they’re talking to? Or explaining, step by step, their entire itinerary, while their home address sits on their luggage? Or when they get up to go to the bathroom and leave their laptop, unlocked, along with their passport and jacket at their chair? It’s mind-blowing. I’ve followed people to their gate because they’re talking about something personal – Not because I want to know more, but because I’m curious as to if they’ll ever catch on that I’m listening to every word. I’ve even WRITTEN THINGS DOWN THAT THEY’VE SAID, in plain sight of them, again, just to see if they notice. They don’t. Situational awareness, people. We need to pull our heads out of our collective smart-phone asses and start realizing what the hell is going on around us!

4) As always, alcohol comes into play. Some of the most fun I’ve ever had in my life has come at events where I’ve stayed sober, and then spent hours listening to people drone on about anything and everything, some of it incredibly personal, to anyone who will listen. Why would you do that to yourself? I still say the best way to get drunk is with a trusted friend, in your own home. Anything else just asks for trouble.

I’d suggest that we make 2012 the year we become smarter – But I’ve been suggesting that for years. And it never seems to happen.

We need to be smarter.

Ever been in a situation where you’ve witnessed someone implode from sheer stupidity? Let me hear it.

Postscript: I’m not immune, either. I’ve done it once or twice. Also, don’t bother posting how you think I’m a dick for taking the photo above. Sorry, but I don’t buy that. I’m doing this as a public service. What if I really was a dick, and did it to bring down the company?