How Blindly Following the Rules Will Eventually Kill Your Business

Imagine this scene: You’re walking down the street, when you come to a “don’t walk” sign. You stop and wait. All of a sudden, you notice a small child walking in the middle of the street, and there’s a good chance he’ll get hit by a car if he doesn’t get out of the street. Do you run into the street and save his life, or do you wait on the sidewalk while he gets run over, because you had a “don’t walk” sign?

Of course you run into the street, ignoring the sign, and rescue the child. That’s a no-brainer, right?

Then why do so many businesses lose customers, revenue, and reputation by not bending the rules when the situation calls for it?

Five Times You Should Bend The Rules in Business:

5) When the customer has a super-easy request that costs you nothing to do. There’s the story of the man who went to a McDonald’s at 11:20 and wanted a burger. He saw them sitting there, but the restaurant wouldn’t sell them to him until 11:30 because “that’s what time we start serving lunch.” The man walked out and has been giving all his money to Burger King for the past six years. They could have kept him in burgers (and kept his money coming in) for life. Instead, they’ll never see him again. If your employees are keeping the rules in place in lieu of occasional common sense, you need to fix that.

4) Because that’s the way we’ve always done it! This horrible motto exists in companies all around the world, from big to small. The problem is, times change, and unless you keep up with the times, you’ll be eliminated. I had a doctor who made me FAX him consent for anything that had to happen. Not my assistant, but me. And he didn’t email. It got to the point where even though I liked him, I simply didn’t work the way he wanted me to, so I found a new doctor. If you can’t keep up with the changes your customers are asking for, you’ll be eliminated. The doctor could have implemented a new series of rules that still complied with medical privacy, and he would have kept me as a patient, and probably even gained my family in the future.

3) It’s always about the bottom line, but not by ONLY focusing on the bottom line. I’m a loyal guest of Starwood Hotels, and have asked for some pretty strange things, including a request to a) drive me to the airport and b) return my rental car because I had caught a massive case of the Flu, and was so hopped up on cold medicine, I didn’t think I should be driving. They did both, taking time out of an employee’s day to make sure I got to the airport safely, and my rental car got returned. Why? Because they know I’m loyal to them, and I spend a lot of money with them all over the world. The few dollars it cost them in time they’re more than going to make up not only in my future stays, but in the value of the amount of people I tell about my great experience that one time that I was sick as a dog. 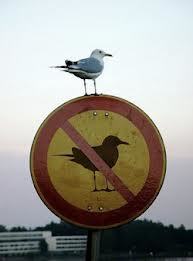 2) “It’s not my job” will always result in “you’re no longer my customer.” How many times have you needed something from a company, only to find out that you needed to be transferred to someone else, or they had to get “a supervisor,” or they “needed approval” to do your simple little task? It’s annoying, and more than likely results in a lost customer. United Airlines has a simple employee mantra by which each employee is required to live: “It’s My Job.” Whether it’s the captain of a B777 picking up a cigarette butt off the ground and throwing it out, or a gate agent helping a passenger find their connecting gate, anything a customer wants becomes the job of the first person they see wearing a United uniform. This guarantees that every employee is empowered to play a role in making the company great, every single time. It’s never “not your job” when it’s “always your job.” And “always my job” translates into “always your customer.”

1) When the computer says no. I wrote a story a while back about an apartment building – I’d been living there for seven years, and their failure to bend the rules resulted in my a) not recommending them EVER agin, and b) them losing a very lucrative renter, who also had the ability to rent on behalf of others. All because nobody, from entry-level to senior management, was willing to bend the rules. “Well, the form says we have to do this, so we can’t do it any other way.” Massive, massive revenue loss. Just because the computer says one thing, and you know it’s not the right thing to do, doesn’t mean you have to follow the rules. Human logic should always come before computer logic.

There’s lots of money to be made by bending the rules at the right time. Try it and see.

Anything I missed? Agree? Disagree? Comment below. Want to learn how to bend the rules better in your company to make more money? Come to one of my Masterminds and learn how!