Usually when I’m on The O’Reilly Factor, like I was last night, I get a bunch of “We hate you, we hope you die” emails. I’m used to them. Bill definitely has a varied audience, no doubt. I delete them without a second thought.

So imagine my surprise when I received a response from a HARO member, commenting on my appearance on the program last night. Simply copying and pasting what he said really wouldn’t do it justice – I actually had no choice but to take screen shots for posterity. Ready?

I thought it was a joke, also! So I emailed him back, and said this: 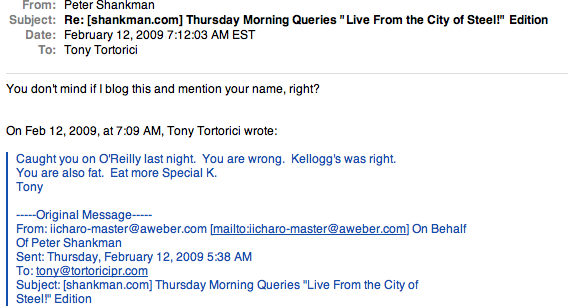 To which, our “Accomplished Communicator” (And keep in mind, I’m using that term as he uses it, directly from his website,) replies…

I’ve been waiting to post this for a few minutes, staring at my email, waiting to see a follow-up email from Tony saying something like, “hey bro, I was just kidding, no offense,” or even “I’m jealous of you so I call you names…” Anything to justify why someone who runs an agency, that, according to the website, has worked with Coke, Ogilvy, KFC, GE, and others…

Hey, everyone’s entitled to their opinion. I’m sure there are people out there who think Kate Moss is fat, too! But still, I just can’t figure out what our friend Tony (again, who I’ve never met or interacted with) has to gain from this. Can anyone else? Because I’m stumped.

What do you guys think about Tony the Accomplished Communicator?

2009-02-12 – 8:08am EST: Edited to add: Some people have asked if his email was hijacked, and this was written without his permission… I’m not buying it for several reasons:1) The email to which he responded makes no mention of my appearance on O’Reilly. He was responding to something he read earlier. Yes, the hijacker could have simply read last night’s HARO, then scrolled up to respond to this morning’s HARO. But… really?2) Let’s say his email WAS hijacked. The email hijacker has nothing better to do than insult me? And comment on my theory on Kelloggs? There’s, I dunno – off the top of my head – PayPal, Amazon, eBay, online banking… “Emailing Peter” doesn’t seem high on the list of a potential email hijacker, right?3) Assuming he does come back and say “Yeah, my emails were hijacked, someone emailed you from Russia with my account,” or whatever, I can simply look up the IP address of where they came from. That’s the easiest litmus test in the world.

Tony, if you’d like to respond, I’ll gladly print whatever you send to me, word for word. Again, I’m not pissed – I don’t know you at all – I have no reason to be pissed. I’m just so, so curious to find out why someone who’s obviously schooled in the art of communication (as based on the awards you list on your site) would go out of their way to insult someone with such a large following.

2009-02-12 – 9:40am EST: Edited to add: FINAL say on it: Tony contacted me on Facebook and apologized. He said he was attempting humor. What he didn’t realize was, a) there are better ways to go about it, and b) he hit a nerve. I think the lesson remains – be careful what you post. Email is forever, inflections don’t come across via email. Think before hitting send. I’m ok with moving on.