HARO/Forbes: Can One Idiot Ruin it for Everyone? NO.

One thing is true: Ryan Holiday is a liar. This isn’t opinion, this is fact.

The military uses this approach to instill discipline. Coaches use it with teams to reinforce teamwork. A college football linebacker misses a basic tackle during Saturday&rsquo;s game; rest assured the entire team will be running laps and enjoying burpees in full pads on Monday afternoon.

David Thier&rsquo;s post in Forbes yesterday has exploded &ndash; as I write this, it currently has 1,400 social shares, including 151 comments on Reddit. Jim Romenesko posted another scoop on it.

Thier&rsquo;s article is a balanced expose on how one idiot (Ryan Holiday, the liar,) duped reporters and got widespread coverage, under the guise of an “experiment.” Unfortunately, he used Help A Reporter Out (HARO), responding to every query he could and claiming to be an expert on everything. In reality, he is an expert on little except telling lies. And he even kinda sucks at that. But, if we had to say he was one thing, for sure, undisputed, it would be that he is a liar.

“I don’t think this was an ‘experiment,&rsquo;&rdquo; wrote one commenter on Reddit. “I think it’s awful to reward liars like this with the attention they want in the first place.&rdquo;

Let’s be clear: This idiot (Ryan Holiday, the liar,) did this for one reason, and it wasn’t anywhere NEAR as altruistic as “an experiment.” He wrote a book on how to lie and get in the media, and he was promoting it. End of story. Want more proof? You know what this guy did before he wrote this book? HE WORKED FOR TUCKER MAX, the man who’s written multiple books on how to lie to get laid. Enough said.

“He’s even lying about that [it was an experiment]; it’s pretty obvious he did it to publicize his book,&rdquo; said another (SIC).However, “From a reporter&rsquo;s perspective, it&rsquo;s not hard to see how it happens,&rdquo; wrote Thier. “I used HARO once, for this story. Tools like this streamline the hectic process that is blogging — were the situation different, I could see easily myself swindled by someone like Holiday.&rdquo;

Thier also interviewed me for his story. I stand by this: “As a journalist, it&rsquo;s always been your job to do your research and check the source, whether you find that source on the street, on Craigslist or on HARO.&rdquo;

The Society of Professional Journalists tweeted a link to the article with the comment, “Journalists: 1) Crowdsourcing is fine. 2) Fact checking is still a thing. 3) Heard of Google?&rdquo; 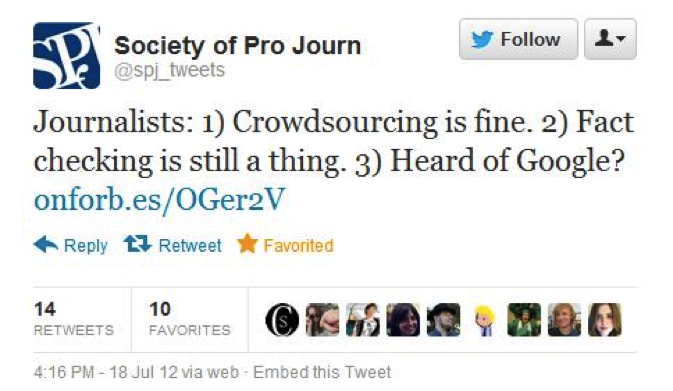 Sure, all of that&rsquo;s true, but there&rsquo;s a few other things we can collectively do both from a journalism point of view and from a marketing and PR point of view.

1. Rate your sources in HARO. Got a good pitch? Worked with someone that proved trustworthy? Give them a rating in HARO. This will do two beneficial things. First, because you trust that source, their pitches will appear higher in your stream of responses. Second, it lets us know that this person is a trusted source, should we ever have to intervene.

2. Report abuse. Getting off-topic pitches? Catch a source lying to you? Please report that person. Send an email to flag@helpareporter.com or tweet us at @helpareporter. One of the benefits of HARO is that we take these reports serious, and we ban the ones who we find who abuse the system. We also ban liars. Like Ryan Holiday.

3. Check your sources. HARO is a novel service and it was designed literally to help you do your jobs. There are thousands and thousands of happy journalists using the service for free, but, like the SPJ tweeted, none of this relieves anyone of being responsible for what they write. Just because something makes your job easier, doesn’t mean it should stop you from doing the parts of your job that are still most important, like fact-checking. Rest assured, we&rsquo;ll be looking into ways we can tap technology, or improve processes, to help address this matter.

To Marketing and PR pros:

1. Be real, be honest, be relevant. It&rsquo;s hard work to earn the trust of a reporter or blogger. It takes a lot of time and effort. Treat those relationships like gold. You can blow it with the click of a send button and worse, the actions of a few can reflect poorly on the entire industry. Do it well, and you help your business. Do it badly, or worse, be a liar like Ryan Holiday, and it’ll hurt you.

HARO has grown to include a massive community of 130,000 sources and 30,000 reporters and bloggers. We have a good thing going and we intend to keep it that way. One person should not be entitled to ruin a good thing for the rest of us.

What other ideas might you have to tackle this problem? If you have a thoughtful and constructive idea, please share in the comments: we are all ears.