Fords, Razors, and Laps, oh my!

Got an email a few days ago from Kristin Foster on behalf of the Ford Motor Company, asking me if I’d like to take a test-drive of the new Ford Fiesta, this cute little European-type “small” car that Ford is bringing in to the US in 2011. Long story short, Ford has recruited 100 “agents” nationwide to drive the new Ford Fiesta for six months as a part of the vehicle’s North American launch. Agents were selected from video submissions and will be completing a variety of challenges over the next six months, testing out the Ford Fiesta and giving feedback on it leading up to the US launch.

I didn’t have the time to grab a car for six months (based on when I’m home, I’d have what, three days to drive it?) but that didn’t stop Ford’s Head of Social Media, Scott Monty, from getting one into my hands anyway. I told him the only time I’d have would be early this morning, and I could drive it to the NY Health and Racquet Club for a swim workout. It’d be early enough to test out the car and see what it could do on relatively empty NYC streets. I never expected him to get up that early, but shockingly, he agreed, and at 6:02am, a Ford Fiesta with a somewhat sleepy Scott was dropped off in front of my apartment!

I gotta say – it’s a cute little car! I was hoping for a manual transmission, (which is really driving, as opposed to an automatic) but no luck – but that didn’t stop me from hitting 11th Avenue and seeing what this cute little 140 horsepower car could do, and I gotta tell you – it was slick! I liked it! I asked Scott all sorts of questions about it, most specifically, did he think the little Europe “small car thing” would ever take off in America. He thinks it will – I’m kind of agreeing with him there – fact is, at $2.00 a gallon, we’re happy to buy SUVs again. But what happens when we’re back at $4? or $5? Or $6, like Europe? There’s a reason the small cars are huge there. (And here, according to CNN, and my quote.) 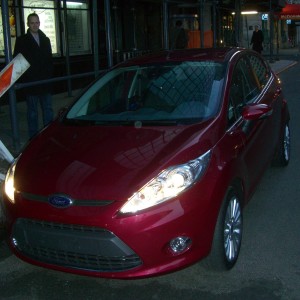 Saying goodbye to Scott, I made my way into NY Health and Racquet Club, and 30 laps later, walked back out. Big ups to J. Travis, PR and Brand Manager for NYHRC, who convinced me to give the club another chance. Forgot how good the pool was!

Next stop was The New York Shaving Company – Thanks to John Scala, who donated a prize for the HARO one-year anniversary, I was getting a free shave! And I’ve gotta tell you – I can never shave with a boring old Bic again. Wow. It was awesome. 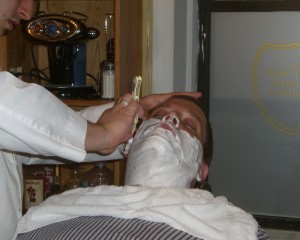 You know why I don’t murder people? It’s bad for business.

Finally, back home to work on HARO, ads, and my next few speaking gigs. Typical Tuesday.