Five Ways To Let Your Startup Make You a Billionaire

Have you joined my incredibly non-annoying, once-in-a-while email newsletter?
This post is otherwise known as “The Amazing Story of my friend Nicholas Woodman.” Six years ago, at CES 2007, I was at the Wall Street Journal’s party at the Wynn hotel, when a funny man with a device on his arm approached me. Me being me, I asked what that funny device wrapped around his arm was. He told me it was a prototype of something called the GoPro camera. I was intrigued. It was small, and it fit on his wrist – and it recorded video?! I was a newly minted skydiver, and always a geek, so I was very intrigued. We exchanged cards, and I shot a photo of him wearing said peculiar device. 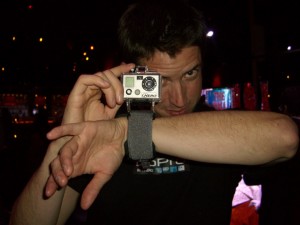 When I got home, we emailed a few times, and he sent me the first generation model. It was called the “GoPro Hero” at the time, and it was simply a video recording device stuck in a waterproof housing. The lens was a normal non-wide angle lens, so unless the subject was a decent distance away, it didn’t capture much up close. But I was still intrigued, and as far as I know, I was the first skydiver to ever wear one on a jump, during a skydive I made in Z-Hills, Florida. (It may have been Sebastian, Florida, I don’t remember. Video at the bottom.) Anyhow, last week, it was announced that Nicholas Woodman, this scrappy kid I met at CES, sold 8.88% of his company to FoxConn, (yes, that FoxConn,) for $200 million dollars, effectively making Nicholas a billionaire. I couldn’t be more thrilled for him, as he deserves every penny, because, let’s face it, he gave birth to an industry that didn’t before exist. Below, in my belief, is some of how he did it. Can you do the same with your startup? 1) Nicholas built a brand around an audience that needed it, not the other way around. Let’s face it – He built a camera. If you’re using a camera, you’re doing so to capture and share the moment. Everyone who wants to do that has a reason to carry a camera. A lot of the best times to capture the best images with a camera, however, come when you can’t actually hold said camera. Before GoPro, only pros wore cameras in sports and such. They were expensive, had to be mounted, and weren’t designed for the market. Nicholas built something designed for the market to which they sell. He didn’t do it the other way around – I.e., he didn’t build a product and try to get an audience to like it – He built a product for a market that cried out for it. Is your startup designed to capture a market that already exists and needs your product? If you’re building a startup, and then first have to go out and convince an audience they need it, you’re making a ton more work for yourself. 2) From day one, Nicholas built a product with word of mouth built into it! Now granted, he had it easy – It’s a camera. Everyone wants to, as GoPro’s tagline says, “Be a hero,” and the best way to be a hero is to capture what cool things you’re doing – Whether you’re skydiving, rock climbing, surfing, parasailing, or even jumping into the Green Grotto off the Amalfi Coast, as I did this past summer.

End result? The majority of people who see the video ask where it came from, and GoPro users are the first to tell them. “I caught it with my GoPro!” was a usual response. Boom, another customer. It’s exactly how I built HARO – You get press, you want to share it. People see your press and want to know how you got said press. You introduce them to HARO. Another customer for HARO. Have you designed your startup in such a way that your customers are automatically encouraged to share how they’re using you to get you more customers? Think of how much money you can save on PR and Marketing, and think about how much quicker you can grow your business, if you have! 3) GoPro is incredibly active in all forms of the social-sphere. This is a no-brainer. Every single GoPro customer makes videos, every single customer takes photos, and the majority of them are doing amazing things. Like this, for instance, one of my all-time favorite videos, where almost everyone in the video had a GoPro strapped to their helmet. You can see a bunch of them on the climbers helmets, check out 0:27 seconds in. GoPro gives their customers tons of ways to share, from their Facebook page and emails, to the “video of the day” contest, where every day, a winner wins the entire suite of GoPro products to their Twitter stream and blog. It’s almost all user-generated content that costs them nothing. And of course, what happens when your video wins? You tell the world. What do you tell the world about? Your awesome video, shot on… wait for it… The GoPro camera. Is everything your startup creates tying back to some form of the social web? And hey… Let’s not forget the first thing I did earlier this year after I rappelled down a 56 story building for charity with my GoPro -I uploaded the video. 4) GoPro has turned content into a way to sell product, much like Red Bull has. Let’s face it – Content sells, but good content sells TONS. GoPro learned early that while the camera is what the user buys, the content it creates is what brings the user in. Would you be so willing to buy the GoPro if you heard it was cool from GoPro itself, or an ad? No. You see the content generated with it on a regular basis. Ever watch Storage Wars? The beginning? Where they’re in their cars driving? Shot on GoPros. Jerry Seinfeld’s “Comedians in Cars?” Look at the car when they show it. GoPros. Hell, Felix Baumgartner had a half-dozen strapped all over his body when he “jumped from space.” Face it, boys and girls: GOOD CONTENT SELLS TONS. Make sure you have content. It doesn’t have to be videos of jumping from space. It could be good quality white papers. 30 second videos on how to prepare for a meeting – Anything that makes people recognize the value of your company and the quality of your products and encourages them to learn more. Content is king, no matter what your startup does. NO MATTER WHAT YOUR STARTUP DOES. 5) Finally, never stop listening to your audience. Compare this video, shot with the first edition of the GoPro, with the one below it – The latter is HD, has a wide-angle lens, mounts to my helmet – All things extreme sports enthusiasts asked for, and on which GoPro delivered. In the end, listening to your audience provides all fuel you’ll ever need to make great products – Whatever product it is your startup makes. Never forget to listen and respond. Congrats again to Nicholas and the whole Woodman Laboratories Family. You all deserve all the success you’re getting. PS: Here’s the first skydive ever shot with the GoPro (to the best of my knowledge.) And here’s how much the GoPro has improved:

What else can you do with your company to help make you a billionaire like my friend Nicholas?