Review: Eleven Days into My New Addiction that is Peloton Cycle

The first thing you absolutely, positively have to understand about buying a Peloton bike is this: If you have any type of addictive or competitive personality, and I mean ANY type, you’re going to become a Peloton Cycle junkie. Listen to me, people. I don’t mean “Keith Richards” type of addictive personality. I mean a personality as benign as “I should only have three M&Ms but I had five,” or, “why is that person walking at the same speed as me? Are we racing? I guess we are.” Peloton will turn you into an addict, and it won’t be a slow road where you don’t recognize it until you’re addicted. This will happen two minutes into your first 45 minute ride. 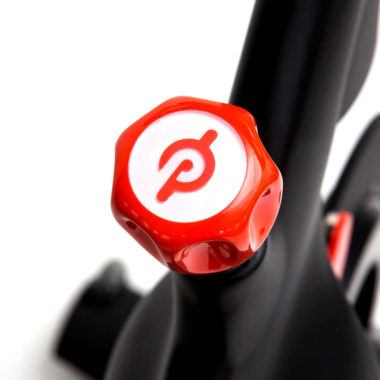 For the uninitiated, Peloton Cycle is a spin bike with a 22-inch screen attached to the front of it. You buy the bike, then pay a monthly or yearly fee to stream thousands of spin classes to your bike, that you can join either live as they’re streamed from their NYC studio, or on-demand anytime. It’s part workout, part on demand TV, and part social media, all in one nifty package with a resistance knob in the middle of it.

I’ve never really been a “spin class” type of guy. I’ve taken a couple of dozen over the years, even winning a Halloween costume contest at a Flywheel location several years ago, where the prize was, (you guessed it,) free spin classes. No doubt, the classes are fun, totally full of adrenaline, with music and people cheering you on, but living in NYC and being indoors most of the day, I prefer the outside. If I have a chance to exercise, I’m the guy getting a summons for running in Central Park before 5am, or doing a long ride on weekends over 9w and up through Storm King Mountain and back. Going to a spin class never really did it for me.

Then I had a child, and my early morning workout routines got cut in half. No longer could I spend an hour or two each day swimming, biking, or running at the first hint of sunlight. For about two years, I accepted that I’d have to curtail my early AM workouts to the days when I didn’t have my daughter staying with me.

Enter Peloton Cycle. I’d heard of the bike about a year ago, and their marketing director at the time invited me down to take a class. It was a fun 45-minute ride, but at the time, I didn’t see any difference between a Peloton class and the other spin studios popping up all over NYC.

Fast forward to this May, when I found out the foot surgery I had in December didn’t take, and I’d be off running for at least the next four months. Angry that all I could do was bike and swim, I did what I always do in situations like this, and made a ridiculously pricey impulse buy in about five seconds. $2200 for the bike, $250 for delivery and setup, and $450 or so for a year’s subscription to their classes. Just under $3,000 for what I assumed would be an overpriced clothes hanger in a week.

The website said it’d take up to two weeks for delivery, but the bike showed up just four days after I placed my order, including the Memorial Day holiday. Thursday, June 1st at 2pm, two gentlemen wearing Peloton shirts arrived at my apartment, carrying three boxes into my bedroom. They laid out a rubber mat, put together the bike, had me enter my WiFi password, adjusted my seat and handlebars, and were gone.

It’s a sexy machine, I won’t lie. It’s quiet as anything, and it has a really small footprint, which is great for a NYC apartment. But still, it’s a home exercise bike, right? Growing up, I remember at least two treadmills, one bike, and a handful of gadgets-du-jour sitting in my parents basement, either covered in dust, or storing clothing and other things we’d never need again. So I wasn’t expecting much when I slipped on a pair of bike shorts, a heart rate monitor, and my cycling shoes, and clipped in for my first “on-demand” ride.

I found an 80s ride, (45 minute on-demand class set to 80s music.) amongst the tons of on-demand rides, including TABATA rides, HIIT rides, 20 minute to 120 minute rides, and a host of other options, all available at your desire to exercise.

“This’ll be fun, but not competitive,” I thought. I naively assumed that because it was a pre-recorded class, I’d be doing my own thing, fighting to set a baseline that I’d then work against to improve next time. In other words, I didn’t think I’d be on the class “leaderboard,” where you’re competing against everyone else in the class, since it was a previously recorded ride, and for me, the leaderboard is key, because I’m competitive.

I was wrong, and that was the moment my addiction began. This is where I took that first hit of the Schedule II Drug that is Peloton Cycle. I can pinpoint the moment I became an addict. It was within two minutes of the class starting, when I saw my name on the leaderboard, and realized – in shock, that it was climbing, as if I was taking the class in real-time. I was competing not only with those who’d taken the class in person, but everyone who’d ever taken it on demand, plus everyone who ever would. This wasn’t me against 30 people. This was me against the world.

It’s been ten days, and the following things have happened.

The addiction here is simply this – You can sign up for the live rides, or any one of thousands of pre-recorded rides and the bike is RIGHT THERE. Like, it’s less than two feet from my bed. What POSSIBLE reason could I have to NOT get out of bed, take the class, and try and beat “mrizzo” or “PRfortheER” on that class leaderboard? (Did I mention you can “follow” fellow riders, and make sure you sign up for the same classes they do? Yeah. That.)

The leaderboard is the crux of the difference between Peloton Cycle and all the other spin classes out there: I not only can try and beat the guy who always beats me, but I can try again, and again, and again, from the comfort of my own home, or from the NYC studio, if I’m feeling really fiery. And each time I try, I know I’m getting stronger, whether I move up on the leaderboard or not.

That’s the real win for me – I can track my metrics, and even in ten days, can see the difference. You know me and my ADHD brain – Without metrics, I’ve got nothing. I trust the data. Give me a year of this, and my 2018 triathlon season is going to be NOTHING like my 2016 one.

The marketing they do is the best kind of marketing, too. I’ve heard there are ads for Peloton on TV, but I’ve never seen them. Every single time I heard a mention of Peloton before I bought one came from people I knew – people I trusted – sharing their addiction as well. And of course, that’s a lot stronger than any advertisement.

The sense of community is huge, too. There were people on my second ride of the day today (yeah, that happened,) who were riding in celebration of “LindaLee,” who hit her 1,000th ride at this class. The instructor was congratulating everyone on their milestones, as “Dancing in the Dark” played on an uphill climb. I found myself clapping and yes, shouting when asked. And this was a pre-recorded ride. Is it cultish? Abso-freaking-lutely. Is that ok with me? Most definitely.

Added bonus – If I feel like it, I can a ride one of dozens of “scenic rides,” anywhere from 10 minutes to a few hours of beautiful rides across the country and around the world, with the screen acting as my view. I’ve taken one so far, and it’s peaceful. 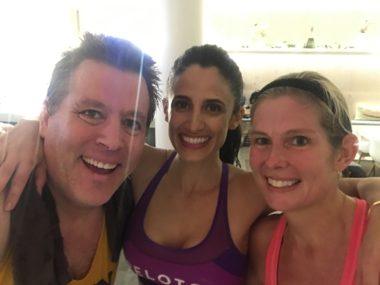 Again, hear me when I say this, because I now speak from personal experience: Peloton will make you one of “those” people: The guy who has to tell you that he does CrossFit within two minutes of meeting him, or the woman on the plane, who when the flight attendant shouts in a panic, “is there a doctor on board?” stands up and shouts, “I’m a Vegan.”

Of course, it connects to Strava and Facebook and FitBit, because, you know, if you can’t share your workouts on social media, did they really even happen?

For me, it comes down to another excellent reason to exercise, and possibly the most addictive one yet: Not just because I know I need to do it to get faster for my races, but because the second I reserve my spot in a live class, whether in person or at home, that’s the focal point. I won’t stay up late, because I want to do the class, and I want to be the best I can, and I want to destroy everyone else on the leaderboard. I want to have exercised before my daughter wakes up. I want the endorphins, the dopamine, and the serotonin I wouldn’t otherwise get. My ADHD ROCKS ME after a Peloton class, in such a good way. This is the tool I’ve been searching for, the one I didn’t realize I so desperately needed.

Yup. I’ve become one of those. A junkie. An addict. An annoying person who will try to convert you every chance I get. And I’m totally ok with it. And I probably owe an apology to all the spin class junkies at whom I’ve ever rolled my eyes. I get it now. I really do. Dare I say, I’ve become one of you, in a way.

This is a game-changer for me. I couldn’t be happier with my impulse buy.

PPS: I have no relationship with Peloton other than being a really happy member of the Peloton family. They have no idea I’m writing this, and this review is totally mine and mine alone.