Only one thought went through my head as I got back to my hotel room after spending the day on the show floor, in meetings, and getting 50,000 volts jolted through my body, and that thought was, “GET A DRINK.”

My night was supposed to start off by Tunnel Flying with Nicole Sheridan and her Husband, Voodoo. Unfortunately, they hit ridiculous amounts of traffic getting into Vegas, (stupid I-15) so we settled on meeting for a drink later.

With that said, I ran over to the Saitek party at the Bellagio, where I met Angie Kibiloski, the Entertainment Editor for Computer Times, (a family-run magazine, how cool!). She was quite fun to chat with, and over a few beers and some fried food, we chatted about the show, about what we liked this year, and of course, about me being Tasered. (You’ll notice a theme.) We also watched the Bellagio light/water show about four times, as the penthouse where we were drinking had a spendid view of it. 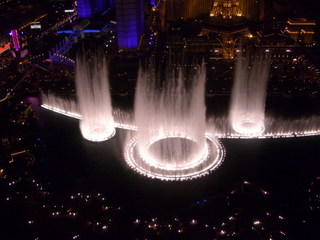 I just want to go on record one more time and state how much I freaking LOVE my Casio Exilim 10.2 Megapixel Camera that I picked up in HK a few weeks ago. There is NOTHING this camera doesn’t do PERFECTLY. And it fits in my Seven for All Mankind Jeans without making a huge buldge.

Upon leaving the Saitek party, I meandered over to the Venetian, (proud to say I didn’t take ONE cab last night, walked EVERYWHERE) where Nicole and Voodoo had finally made it to their hotel. (All the AVN celebrities stay at the Venetian every year. The Venetian has a legendary reputation for it.)

Nicole looked stunning, sporting some damn fine new red hair, and Voodoo didn’t look bad either, with his fire-engine red and blonde highlighted mohawk. We chilled over a few drinks, hanging out, catching up, and discussing, of all things, skydiving. I met Nicole long before I found skydiving, but as it is, the three of us are active jumpers, so we bonded over that. 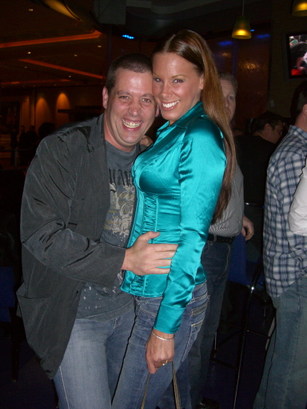 I am SO going on a no-carb diet. My face looks positively ROUND. My entire face looks like Oliver Platt’s nose. I’m very sad. 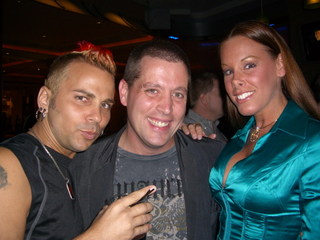 While there, ran into David Herman of Juice Wireless, who proclaimed my Christmas card “The best Christmas Card Ever.” Our non-sequitor for the evening was complete.

Leaving the Venetian, and saying goodbye to Nicole and Voodoo, I found Steven Wright-Mark, of Schwartz PR. Steven and Barry Schwartz are my two mentors in the PR industry, and both got thank you’s in my book for being the best mentors in the world.

Steven and I walked out of the Venetian, and three thousand miles down the strip to the MGM, where Sony and Nyko were hosting their annual CES Poker Party. Greg Clayman at MTV would have died and gone to heaven here. I, on the other hand, am not a huge poker player, but definitely enjoyed the food (Fried Chicken! How cool!) and company of a bunch of cool people. Great party, kudos to Sony Online Entertainment and Nyko for the event.

Steven, myself, and someone from Nyko who, of course, got to see the video of me being Tasered. 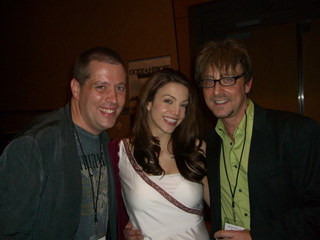 And of course, because it was Sony, they had the games on flat-screens, including this auto-racing game, which I played with this gentleman, who KICKED MY ASS. I bow to his mad skillz. 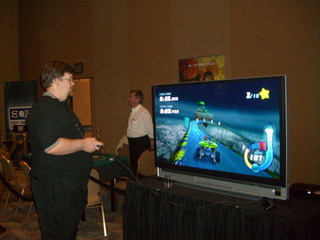 That was it. Relatively early night.

Finally, mad props to Nicholas Woodman, the Managing Director at GoPro Camera, (the wrist-mounted camera I mentioned yesterday) who gave me a unit to try out. Can’t WAIT to skydive with it. Will post video after.

And that’s it. One more day on the show floor, then a red-eye home tonight. Fun fun fun.