I bought AAPL last month. I’m just sayin’. Of course, this is like, the second time EVER that I’ve called a good stock, so I’m not all that and a bag of chips.

Speaking of chips… Able Planet has a pair of noise cancelling headphones that I tried today. They were better than the Bose 3’s, which I’ve been touting as the best headphones in the world. These blew them away.

Tip: The Sands media room is a lot less crowded than the LVCC media room. 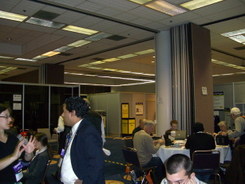 Quote of the day, from my mom: “Peter, <friend of ours> has a son who works in electronic media. His company is named Team… something or other. He’s at the show. You should go find him.”

Walked from my hotel to the convention center this morning. Needed the walk to clear my head/get rid of my headache. It was about two miles. It’s amazing how no one walks outside of major cities. I saw one other pedestrian the entire walk.

Now – the coolest part of the show – TASER – Yes, that company, will TASER YOU IF YOU ASK THEM!!! I’m really, really debating doing it and getting video. How COOL would that be to get on video? I’m seriously considering doing that. I’ll let you know…