An Open letter to Michael Vick

It would have been very simple to write a brief mention of you, noting that I hope you get the book thrown at you, hoping you get abused and beaten in prison, tortured and eventually left to die just like the animals on whom you wagered… But what would that accomplish?

Rather, I write this, not so much that I hope you’ll read it, but rather, on the chance that millions of other people will see it, and feel the anger, the absolute rage, the disgust that I share the same title as “human being” with something as foul as yourself.

I write this because you’ve failed, Mr. Vick.

You’ve failed as a person.

You’ve failed as an example to children and adults the world over.

You’ve failed as a sportsman.

You’ve failed as a human being.

You had everything. You had “the life.” You had “the image.” You had the endorsements, you had the backing of the fans. You literally had the world at your feet. You had the gift of being one of the most talented athletes in the world, good enough to earn a $100 million dollar contract with the Atlanta Falcons. You had “Star Quarterback” labeled on you wherever you went.

In fact, the only thing you seemed to be missing was compassion.

You took everything that you had, and rather than do something good with it, thought it better to kill animals for your own amusement.

I’ll say that again. Mr Vick, you are an animal murderer. You sir, murder animals, and you do it under the guise of “sport.”

There is nothing sporting about making animals kill each other for your own personal amusement, Mr. Vick.

For what reason, Mr. Vick, would you do this? You didn’t need the money. You could have gone to Vegas if you felt the need to gamble. You could have taken drugs if you needed a high.

Instead, you felt the need to murder animals. Animals that had no ability to save themselves. They couldn’t call their assistants to bring the limo around when they wanted to go home. They didn’t have the ability to call a time-out and regroup. They had to fight until they were dead, or so bloody and injured that they prayed for death.

And you gave them death. According to the Associated Press, your dogfighting ring allegedly executed underperforming pit bulls by hanging, electrocution or other brutal means, including slamming them into the ground until they were dead.

Well done, Mr. Vick. Your mother must be so proud of you. The NFL must be thrilled to have you among their ranks. Except that you were uninvited to training camp. So it looks like they’re not.

With a $100 million dollar contract, you couldn’t purchase one person to be a part of your entourage with any soul? Anyone who could have said, “you know, not only is this illegal, but it’s also terribly cruel. Why would you want to get involved in this?”

And don’t give me any stories about how it’s what they do in the projects, or it’s how you were raised, or it’s your culture, or your socio-influence. I simply don’t care. Hurting animals, deliberately, and for your own sick pleasure is wrong. Nothing you can say, can ever, ever, justify that.

Someone in your camp asked how this is any different than a celebrity getting busted for having Cocaine in her pockets… I’ll explain how, Mr. Vick. If a celebrity wants to blow lines until his or her heart explodes, he or she is free to do that. In fact, if they die, it’s probably more proof that Darwin was right. They’re not torturing and murdering animals in the process.

Nike has dropped you.

Reebok has dropped you.

Upper Deck has dropped you and removed your cards from unsold packs.

No training camp for you.

Your “buddy,” another heartless being, Tony Taylor, turned on you, copped a plea, and is helping the government build a case against you.

Your teammates are saying very scripted things, like “he hasn’t been convicted yet,” and “it’s an unfortunate situation.”

You know what those lines are called in the PR world?

They’re called “distancing one’s self from the situation.”

How does it feel to be a pariah?

Chances are really, really good that you’re going to wind up in jail, Mr. Vick.

And it’s not going to be a quick 15-day-sentence, either.

Years, possibly. Your career is more than likely over.

I mean, honestly – who would want you, knowing what you do behind closed doors for “amusement?”

They say the universe tends to work itself out as it should. Looks to me, as your friends turn on you, as all your sources of income dry up, and as you’re left out to rot, on your own, with no friends, no team, and no entourage to back you, that the universe is working out just the way it should, indeed.

Perhaps in prison, you’ll learn something about compassion. Perhaps it’ll come at the hands of someone bigger than you one night when the guards aren’t there to protect you. Perhaps someone with an electric plug will teach you about compassion, about love, about feelings, about caring.

Or perhaps you’ll be in so much pain, you’ll be unable to learn. And then you too, just like the dogs you murdered, will pray for death.

But then, it seems to me, as you take stock of the complete one-hundred-eighty degree turn your life has taken in the past fourteen days, you might already be doing that. 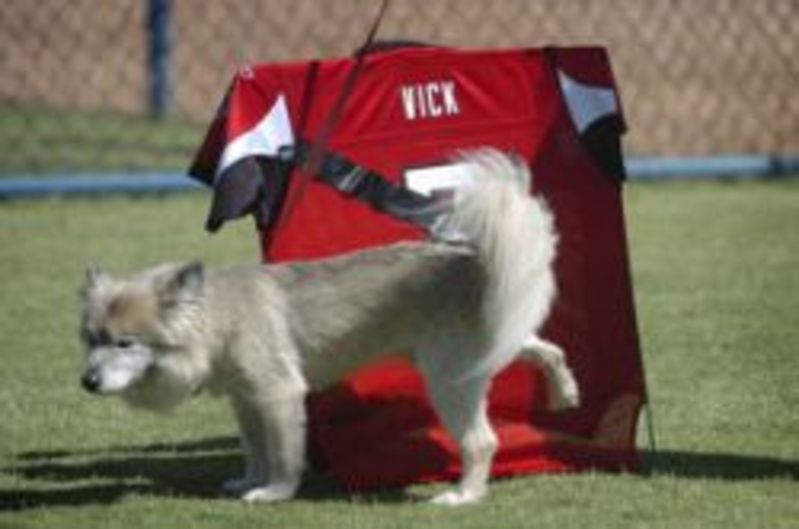